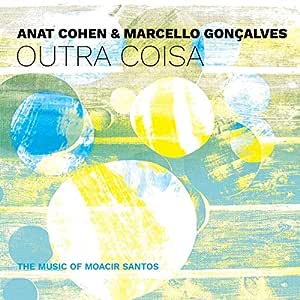 2017 release from clarinet superstar Anat Cohen. On Outra Coisa, a duo date with 7-String guitarist Marcello Gonçalves, Cohen delves deep into the music of celebrated Brazilian composer Moacir Santos. While Santos was an accomplished orchestrator and arranger (he later wrote music for films), it was the connection between his music and the guitar which was at the genesis of this recording. "I've always loved the rich orchestral sounds of Moacir's compositions but could not imagine how to transfer his large ensemble sound into my solo guitar. Reading Moacir Santos's scores directly from his songbook, I was surprised how perfectly it fit the 7-string guitar, in the original key, as if the music was composed for the instrument," says Gonçalves. "I spent a year working on that repertoire and when Anat visited Brazil, I proposed that we get together so I could show her the arrangements I'd been working on. Anat proposed meeting directly at a recording studio and so we did." The resulting recording is an intimate exploration of Moacir Santo's music, but two instrumental virtuosos who are intimately familiar with the music of Brazil, as well as with the varied influences which inspire Santos' music. The duo setting and Gonçalves' inventive arrangements allows both musicians to concentrate on the essence of Moacir's music, bringing it to life in a fresh and unexpected way.

''And what glorious music this is. Anat Cohen and Marcello Gonçalves are superb.'' --Raul da Gama, Latin Jazz Network

''Recently discovered this beautiful duo album and can't get enough! Anat is my favorite clarinet player making music these days...fluid, creative, and always so musical!'' --D.C. Wells, Sax on the Web

5.0 out of 5 stars
5 out of 5
6 customer ratings
How does Amazon calculate star ratings?
Amazon calculates a product’s star ratings based on a machine learned model instead of a raw data average. The model takes into account factors including the age of a rating, whether the ratings are from verified purchasers, and factors that establish reviewer trustworthiness.
Top reviews

Dr. Debra Jan Bibel
TOP 1000 REVIEWER
5.0 out of 5 stars The Orchestral Sound of a Duet
Reviewed in the United States on May 8, 2017
Verified Purchase
The duet album honors Moacir Santos, esteemed for his conducting, arranging, and film orchestrations. A multi-instrumentalist, he also instructed many Brazilian musicians, including guitarists Baden Powell and Roberto Menescal and percussionist Wilson das Neves. Brazil has a history of many talented acoustic guitarists, both six- and seven-string forms, and among them is Marcello Gonçalves, heard here. He discovered that he could easily adapt the orchestral scores of Santos to his seven-string guitar even without changing keys. He is joined by Anat Cohen and her clarinet. Cohen is very much at home with Brazilian music and has recorded several albums of choros and sambas, including her own compositions. "Coisa," the name of many compositions translates simply to "thing," and one of the many highlights of this album is Coisa No. 5, also known as Nanã. The two musicians are wonderful in their interpretations and performance. Cohen's tone throughout the album is smooth and sensitive, while Gonçalves nimbly picks and plays chords as melodious and rhythmic. This beautiful, enjoyable album nearly sounds orchestral, owing to Santos's compositional skill, particularly with the track Maracatucutê; and the soft mellowness of seven-string guitar against the soprano sharpness of the clarinet is nicely balanced. The music of Moacir Santos is varied, as you would expect for a cinematographic composer, hence this album flows cheerful, as in Amphibious and Coisa No. 10, thoughtful or sweet, as Coisas No. 6. and 9, and also melancholic as Oduduá and Paraío. The aesthetic pleasure of listening echoes the joy of the masterful performances.
Read more
11 people found this helpful
Helpful
Comment Report abuse