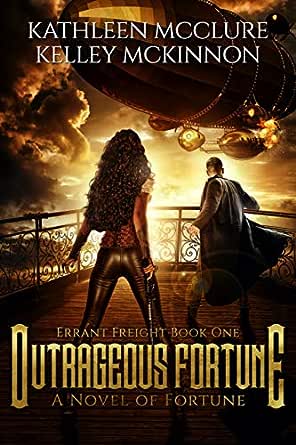 You've subscribed to Errant Freight! We will preorder your items within 24 hours of when they become available. When new books are released, we'll charge your default payment method for the lowest price available during the pre-order period.
Update your device or payment method, cancel individual pre-orders or your subscription at
Your Memberships & Subscriptions
There was an error. We were unable to process your subscription due to an error. Please refresh and try again. 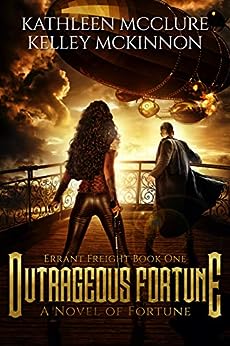 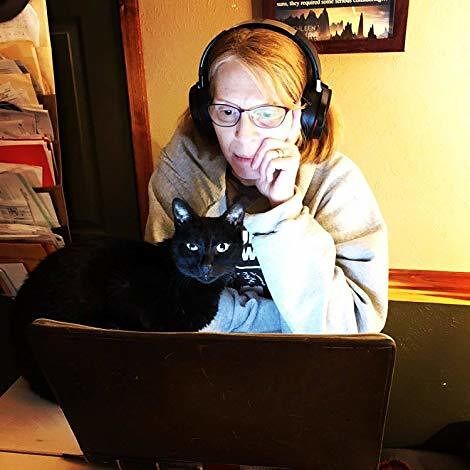 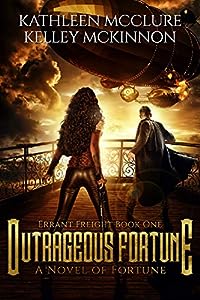 Kelley McKinnon started off in musical theater, including national tours (one with Meatloaf). After focusing on directing for eight years, she wandered into an audition for the American Shakespeare Center and spent four more years on the road as a performer. During this time she and Kathleen dug into writing the first of the Errant adventures, an exercise that went on hold after Kelley stopped touring, taught a summer session at NYU and fell in love with teaching. This led to her to pursue of an MFA to support her new habit. Somehow, between the endless papers involved in her graduate program, she and Kathleen were able to finish Outrageous Fortune, and now Kelley is contemplating a long nap.
--This text refers to an out of print or unavailable edition of this title.

4.5 out of 5 stars
4.5 out of 5
64 global ratings
How are ratings calculated?
To calculate the overall star rating and percentage breakdown by star, we don’t use a simple average. Instead, our system considers things like how recent a review is and if the reviewer bought the item on Amazon. It also analyzes reviews to verify trustworthiness.
Top reviews

A. Karamazov
2.0 out of 5 stars Poor logic undermines good writing
Reviewed in the United States on January 16, 2020
Verified Purchase
On the plus side the characters, even though blatantly larger than life (the guys are all heroically tough and manly, the ladies all spunky and gorgeous), are still likeable enough to care about. And, as other reviewers have mentioned, the fight scenes are well written: vivid, and quickly resolved, like real fights. The downside is that a core feature, one integral to the plot, is that they live in a society where technology beyond what might be called steampunk is outlawed. For example, the chief villain’s “Rolls Royce” is horse drawn. Yet, bizarrely, they have an economy in which handful of lower-middle-class ex-soldiers buy a starship (literally travels between stars in days or weeks) having private berths for all the crew, four extra berths for guests, an exercise/combat room, an engineering bay, a medical center, a kitchen, etc. Even assuming some mystical, non-technical power source, the idea of economically building just the hermetically sealed shells of such things without advanced technology stretches belief past the breaking point.

Even more illogical is that they maintain this anti-technological stance while they are at war (full blown in the recent past and more like a cold war when the story opens). If two nations are at war, and one permits technological advancement and the other does not, it doesn’t take a rocket scientist to see how that will play out. Yet, in the midst of a desperate battle for survival, neither side succumbs to the temptation. Apparently there are pro-technology rogue factions, but they seem mainly interested in personal wealth and power, but even when they do develop a new weapon it's to no avail; the environment-loving, anti-technology good guys handily take down these selfish trouble makers. Really? Eventually, the failure to logically explore the consequences of having a technology-banning society undermines the believability of the entire story.
Read more
2 people found this helpful
Helpful
Comment Report abuse

AvidReader
4.0 out of 5 stars A jolly good read
Reviewed in the United States on June 19, 2017
Verified Purchase
Outrageous Fortune is set in the same world as Soldier of Fortune, a future steampunk world set on the planet Fortune. This story takes secondary characters from the first book and tells the story of what they were doing when their lives intersected with Gideon Quinn in Soldier of Fortune. You could read the books in either order. So here we find out more about Rory and Jinni and John Pitte and his crew. If you read the first book and wondered how Jinni and Rory got on once she was aboard the Errant, or how Etiane lost his hand this book will tell you.
The banter is even more amusing than in Soldier of Fortune. The plot is as unpredictable; the writing is as good and thankfully the proofreading is better, so that I found much less errors than in book one.

Once again the book has snippets of backstory throughout and again this is done exceptionally well. The book’s point of view weaves back and forth between the characters, but it’s done so smoothly that what in less skilled hands would be head hopping, here is just a shifting point of view. Even so, personally I would prefer less of it.

Again the characterisation was superb and our heroes had noble sensitivities. People who at first appeared to be enemies sometimes found common ground, and ‘not taking it personally’ was a repeated theme.

The story revolves around a job the crew of the Errant take to retrieve an item. It should have been a simple matter, but turns out to be far more complicated. I would never have thought that a simple calculator could be so much of a problem.

I highly recommend this story to all who love a rollicking sci fi or even just a great adventure story, because the sci fi aspects don’t intrude on the story. It’s just a jolly good read.
Read more
5 people found this helpful
Helpful
Comment Report abuse

Kindle Customer
3.0 out of 5 stars 3 1\2 stars
Reviewed in the United States on March 22, 2019
Verified Purchase
Here's the problem I have with this book, which may not be an issue for others. The first in this world- Soldier of Fortune - was excellent. Supremely entertaining, as a matter of fact. The actual story to this was good, with the exception of the raging hormones. Since the first book wasn't of this nature, I assumed the second would be another good yarn. Every, and I do mean every, character was gorgeous, hot, etc, and they all had hyperactive hormones. Had I wanted to read such a story, there certainly isn't a dearth of them listed under paranormal and sometimes urban fantasies. Maybe this new bent was due to the co-author's influence; beats me. I will read the next- Fortune's Fool- since that brings back the original character from the first book. Hopefully that one will continue the excellent storytelling I had first enjoyed.
Read more
2 people found this helpful
Helpful
Comment Report abuse

Connie B
5.0 out of 5 stars Captain's gambit
Reviewed in the United States on September 2, 2019
Verified Purchase
Captain John Pitte has his own airship now that the war is over, but he bears the guilt and the scars for his part. so he takes jobs to keep his ship afloat and his crew fed. but this job puts his crew under attack from more than one other crew bent on theft and they always seem to be ahead. John will have to think much faster

this second book is in the skyships after the war. it brings back familiar names and weaves them into their own fantastic story
Read more
One person found this helpful
Helpful
Comment Report abuse

Emily Pennington
TOP 500 REVIEWER
5.0 out of 5 stars Loved It!!!
Reviewed in the United States on March 9, 2017
Verified Purchase
John Pitte and Jagati O’Bannion ran through the canyon doing plasma bolts. When the smoke from the attack got thick enough, they both quietly began their stealthy retreat. Then the firing started again.

After first suspecting they might be lost, they popped out of a tunnel to board their airship – only to find the means of their escape was no longer there! They started to climb higher up the canyon walls, only to discover a sniper waiting, while other armed shooters were coming through the tunnel they had exited! Not an auspicious start for their retrieval job at Dyar’s Canyon! Maybe they should have skipped this one . . .

This book is well written with great development of the characters, who are immediately likeable! The action is immediate and fast-moving, full of surprises, twists, and turns every step of the way! I definitely recommend it as a fun series to get into! I’m a new fan and very glad to have had the opportunity to read it! My comments reflect my honest opinion.
Read more
Helpful
Comment Report abuse
See all reviews

William
5.0 out of 5 stars Brilliant
Reviewed in the United Kingdom on April 6, 2019
Verified Purchase
A book that I thoroughly enjoyed have been trying to see what I missed by not reading this author before on the must read for the rest of their books
Read more
Report abuse

Trolls
5.0 out of 5 stars More please:-)
Reviewed in the United Kingdom on February 24, 2018
Verified Purchase
Another really enjoyable book. Well written characters and a good plot. Loved, also, the joining in of the character from the previous book. I would like another few books in this series... any time you're ready!
Read more
Report abuse
See all reviews