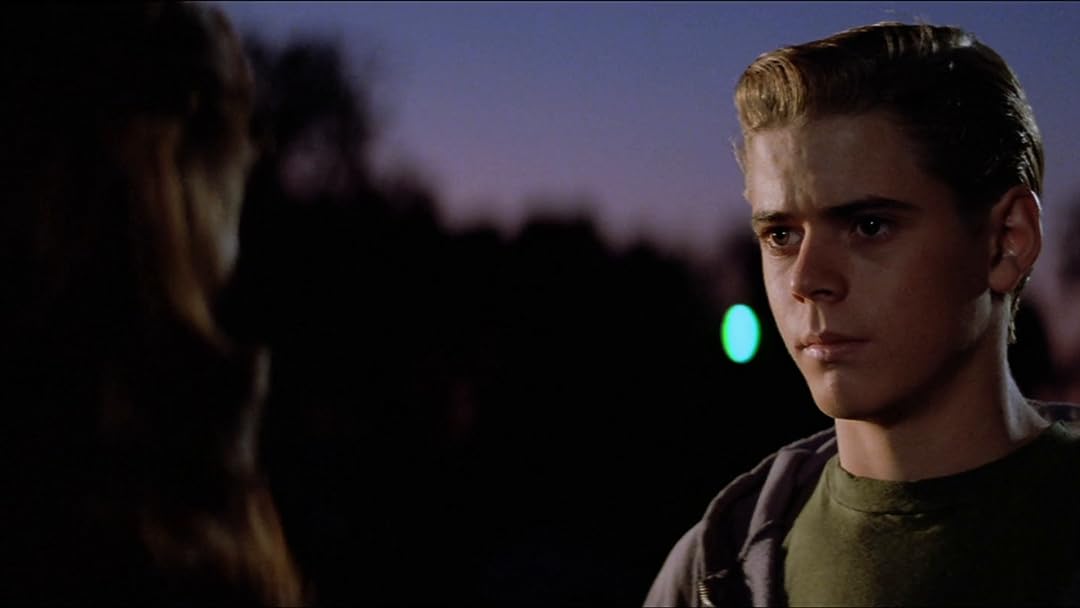 Mandy WadeReviewed in the United States on September 16, 2022
5.0 out of 5 stars
Classic movie on classic novel
Verified purchase
It's 1952 in Tulsa, OK -- classic class war between groups from different sides of the tracks. Life is hard when your parents die and leave three brothers to make their way in the world-- but they always have their Greaser friends to watch their backs. "Stay gold!"

JamesReviewed in the United States on September 15, 2022
5.0 out of 5 stars
A gift to readers
Verified purchase
This cut off the film feels completely natural Of you've ever seen the original edit. It includes more of the specifics found in the book - which is really saying something - because the film in its original form, does an exemplary job of staying completely true to S.E. Hinton's novel. The extra features are also spectacular.
One person found this helpful

JenReviewed in the United States on September 5, 2022
5.0 out of 5 stars
Great Classic, with plenty of Stars!!
Verified purchase
My 8th graders read this every year, then we show this version of the movie. They absolutely love it and are surprised to see the actors that they know today, so young looking!

Matthew D'SouzaReviewed in the United States on May 19, 2018
5.0 out of 5 stars
"Nothing Gold Can Stay" - Robert Frost
Verified purchase
The beautiful sentiment behind The Outsiders will move any audience. Your heart will break when you hear the character Johnny utter "Stay gold, Ponyboy." That line alone has stayed with me my entire life. The Outsiders will change your life forever in a way only a truly great film can.

Francis Ford Coppola directs yet another masterpiece of cinema with his 1983 coming of age classic film The Outsiders. I have loved this movie ever since I first saw it as a kid. It not only holds up, but I appreciate it more each time I watch it. It is a realistic testimony to childhood, poverty, gang life, friendship, and family. Coppola crafts each scene with a tender care and understanding for these characters. The result is every single scene is iconic. Coppola can claim he elevated the novel The Outsiders by S.E. Hinton to new heights as this is likely the greatest adaptation of a book ever.

The Outsiders is a landmark movie for its star cast, clever cinematography, apt framing, exhilarating soundtrack, gorgeous score, emotional story, and emotive acting. Every teenager needs to watch The Outsiders. I guarantee they will relate to someone in the movie.

Now, the director Coppola must be commended for his inventive camera work in The Outsiders. Whether someone is running across a field and the camera pans along with them or gentle still shot lingers on an emotional moment, Coppola always frames every shot to perfection. Practically every second of The Outsiders can be taken out of context as immortalized as one of the most iconic pictures in cinema history. The whole movie is gorgeous. I absolutely love the scene with the sunset shining on Ponyboy and Johnny's faces while they appreciate nature. Their silhouettes and monologues are burned lovingly into my memory. Some of Coppola's finest directing is woven into the thoughtful blanket of empathy that is The Outsiders. You must see this film!

The Outsiders features perhaps the most well cast collection of actors ever assembled. The entire ensemble delivers acts their hearts out. C. Thomas Howell gives the greatest performance of his life as Ponyboy Curtis. He is the movie character I relate to the most out of anyone. He feels so real. Howell acts rather resolute to hide his pain while revealing his emotions through his expressive eyes and face. I wish Howell's acting career was longer.

Likewise, Ralph Macchio lays down the most emotive performance from a child actor in memory as the lovable Johnny. Matt Dillon is perfect as the rough mug Dallas that wishes life were different as you start out hating him, then you feel sympathy for his character by the end. I remember Dillon most fondly for this film.

The Outsiders contains my favorite Patrick Swayze role ever as well. Swayze nails Ponyboy's stern oldest brother Darrel. He is tough, but clearly wishes the best for his youngest brother. Swayze is astoundingly cool and sympathetic here. Rob Lowe is so sweet as Ponyboy's middle brother Sodapop. He is as likable as I recall and gives a brilliant monologue at the end.

Additionally, The Outsiders boasts a fun performance from Emilio Estevez as Two-Bit Matthews. He is a blast to watch as Estevez eats up the scenery every time he is on screen. The Outsiders is also notable as one of Tom Cruise's first roles on film. He is already charismatic here. Cruise's future was already in motion as you are drawn to him when he is present. Diane Lane similarly engages the viewer deeply in one of her earliest roles too.

Musically, the score is one of cinema's most beautiful. Carmine Coppola composed the most gorgeous theme for The Outsiders. The rest of the soundtrack is a series of old rockabilly tunes and surf rock selections that dazzle and thrill you. There is always something nice to listen to while you watch The Outsiders.

In all, The Outsiders remains one of my favorite films. It is a must see movie for all teenagers and adults. Francis Ford Coppola bestowed us with another amazing adaptation of a novel like his Godfather Trilogy. I highly recommend The Outsiders. You will never forget it.

Gary ScottReviewed in the United States on September 29, 2005
5.0 out of 5 stars
What an incredible and loving restoration
Verified purchase
I should start off by sharing that The Outsiders has long been one of my favorite films ever. The reasons are sentimental ones to be sure, but even in its original form it was a beautiful, almost romantic version of the Hinton book. I also admit to being ever so slightly ticked upon hearing of this release, because I already own the original on DVD and I just *knew* they were going to release something like this one day.

Not that I hesitated to order this new version, mind you. And now I'm going to urge you to do the same. It's really that good - this minor masterpiece now seems somehow and finally "complete" and is so much more compelling than the film was when released.

Much has been said about the restored scenes, especially the entirely "new" first reel that really serves to communicate the depth of character and relationship that makes the book as popular and as enduring as it is. Particularly notable is an extended, crushingly intimate scene between Pony Boy and his brother Soda Pop as they prepare to fall asleep in each others arms. I'm sure this will cause homophobic titters in teenage viewers but it's entirely true to the novel and to these characters. Indeed, the restoration of the Soda/Pony relationship is one of the most valuable elements of this "complete" version - if you had/have a brother, you'll find yourself wishing he could show the compassion and tenderness Lowe displayes toward Howe.

The most notable restoration is a gem of a scene between C. Thomas Howe and Ralph Macchio that pops up in the middle of the film. The "church sequence" has always been my favorite portion of this film & seems almost to serve as the heart of the story, if you will. This is an extended, "actorly" scene that really allows the pair to sink their teeth into the material. Macchio has long been among my favorite actors and Johnny seems almost the role of his lifetime, and he really shines here - moving from fear to dispair to anger to apology ... it's quite an *amazing* scene, and I can't imagine why it was ever omitted from the original. The downside is that this addition does serve to break up the dream-like, utterly poetic feel to this portion of the film [the now-deleted portion of this sequence is included on the second disc].

Finally, I must admit I was nervous about the new-version score after reading some of the comments here. While there are times - particular moments & sequences - where I miss the epic, theatrical score of the original, I love what they've done here. It just "feels" right and I think it also serves to lift a little "heaviness" from what is already an extremely heavy movie. Two key examples might be found in the aforementioned "church sequence":

In a negative sense, we have the key scene of the entire film, one in which Pony and Johnny stand before a breath-taking sunset and the Robert Frost poem is introduced as the movie's central theme: The "old" score featured here a sensitive and spare string "comment" on the conversation between the two [if you're at all aware of the strings behind the Dorothy/Professor Marvel scene in Oz you'll instantly know what I'm talking about]; now we get an instrumental of the contemporary-sounding "Stay Gold" theme that seems almost a loud and drunken intruder on this most tender and personal moment. It very nearly destroyed the scene, at least for me.

In the altogether positive sense, the Church Sequence no longer suffers from the emotional weight the original score lent. Instead, we get Elvis! GLORIOUS early Elvis selections - tons of them - which are entirely appropriate for the time period and which at once seem to narrate and to participate in and amplify their scenes. Throughout film, these song selections lend an objective and running conversation between director and viewer. On the one hand I resent this, because it removes me slightly from the emotion and action on screen. On the other hand, it feels correct for the age of the characters and it truly does lift the "downer" feel to the overall film.

It would have been nice to have the option of either score included on this disc - or to selectively pull in the orchestral score when appropriate - but that's a relatively minor complaint. Personally, I prefer the new score, and I've the feeling it will grow on viewers after repeat viewings.

The only other quibble I have is that they've messed with the opening credits, which I always found quite incredible. That *enormous* title doing that slow, uninterrupted crawl across a sunset-drenched screen - God, how I miss that! Thankfully, though, they retained the warm and beautiful Stevie Wonder "Stay Gold" as the theme song.

Whether you buy it for yourself or for your kids, I'd highly recommend grabbing this disc [oh the extras are GREAT fun too!]. At forty, this film still has an effect on me I don't quite comprehend, and every kid I show it to ends up loving it, too. Thank you, Coppola & Co.
5 people found this helpful

Rachael B.Reviewed in the United States on August 30, 2022
5.0 out of 5 stars
Sad!
Verified purchase
This is a tough movie to watch! So many young actors that became big starts but this is such a difficult movie.

JamesReviewed in the United States on September 2, 2022
5.0 out of 5 stars
Classic
Verified purchase
If kids today were like this we’d all be better off
One person found this helpful

Tara FrancescaReviewed in the United States on August 3, 2022
5.0 out of 5 stars
Generations
Verified purchase
I love this movie. Read the book more than 3 times. I finally watched it with son. I kept telling him Ralph Maccio was more than just Karate Kid. We watched it and he love it just as much, repeating some of the lines. Classic but generational transcending. Love that.
See all reviews
Back to top
Get to Know Us
Make Money with Us
Amazon Payment Products
Let Us Help You
EnglishChoose a language for shopping. United StatesChoose a country/region for shopping.
© 1996-2022, Amazon.com, Inc. or its affiliates