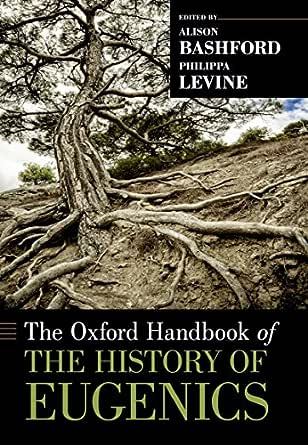 Flip to back Flip to front
Audible Sample Playing... Paused   You are listening to a sample of the Audible narration for this Kindle book.
Learn more
ISBN-13: 978-0195373141
ISBN-10: 0195373146
Why is ISBN important?
ISBN
This bar-code number lets you verify that you're getting exactly the right version or edition of a book. The 13-digit and 10-digit formats both work.


Alison Bashford is Professor of Modern History at the University of Sydney. She has published widely on the modern history of science and medicine, including Purity and Pollution and Imperial Hygiene, and has co-edited Contagion, Isolation, and Medicine at the Border.

Philippa Levine is the Mary Helen Thompson Centennial Professor in the Humanities at the University of Texas at Austin. Her books include Prostitution, Race and Politics: Policing Venereal Disease in the British Empire, and The British Empire, Sunrise to Sunset.
--This text refers to the hardcover edition.

Both the beginner and the seasoned scholar should be able to find new and intriguing perspectives in this well-edited volume. * Maria Bjoerkman, BJHS * --This text refers to an alternate kindle_edition edition.

The Professor
5.0 out of 5 stars an indispensable book on this topic
Reviewed in the United States on January 17, 2018
Verified Purchase
This is now the standard work on the history of eugenics. It documents the close connection eugenics had with Darwinism and evolution in general. Before Darwinism most of the west believed that all humans descended from Adam and Eve, thus were all brothers as the Bible says they are. After Darwinism took over the elites and the universities, all of this changed. Thus the so-called enlightened educated people who, as the late Harvard professor Stephen Jay Gould famously wrote in his book Ontogeny and Phylogeny (Belknap-Harvard Press, 1977, p. 127–128) that “Biological arguments for racism may have been common before 1859, but they increased by orders of magnitude following the acceptance of evolutionary theory." Well put. I read many sections of this book, mostly those of interest, which was most of the book. It is a reference book, thus is not normally read from cover to cover. It is an indispensable book on this topic.
Read more
2 people found this helpful
Helpful
Report abuse

P. Hooper Mayhew
5.0 out of 5 stars Eugenic history in depth
Reviewed in the United States on April 7, 2013
Verified Purchase
These highly accessible essays are written by a cadre of experts and edited with unusual care. This compilation is highly recommended.
Read more
6 people found this helpful
Helpful
Report abuse

Eric Leonardis
4.0 out of 5 stars General Overview
Reviewed in the United States on April 24, 2014
Verified Purchase
This collection of essays is great for someone interested in the broad use of eugenics around the world. But for someone interested in writing a paper about American eugenics, I would suggest looking elsewhere. It is really eerie and unfortunate how this idea keeps showing up in new places.
Read more
6 people found this helpful
Helpful
Report abuse

Wild Swan
2.0 out of 5 stars The History of Eugenics Has not Ended
Reviewed in the United States on December 27, 2011
This book covers the history of eugenics better than most because it covers eugenics in the post-World War II period and eugenics in countries other than Germany, the US and England. It is occasionally informative but it is not illuminating regardless of the period under discussion.

It most obvious failure comes from the fact that eugenics underwent radical changes after 2000 and these changes are not covered in this book. The American eugenics society renamed itself the Society of Biodemography and Social Biology in 2010 following a long power struggle which began in 2000. Biodemography is a new form of eugenics which is being sponsored by a unit of the US government - the Biological and Social Research division of the National Institute of Aging at NIH. The Handbook does not even explain the term - biodemography, let alone discuss the significance of a government sponsoring eugenics for the first time since the Nazi debacle. Granted that the changes in eugenics were not complete in 2003 when the Handbook was published, it remains the case that the book completely misses the change.

Another point is that there would not be a new version of eugenics if the old version were not flawed in the eyes of the eugenicists themselves. But the Handbook does not even discuss issues which, it turns out, were so important to eugenicists themselves that disputes over them tore the American society apart. (No new Officers or Directors of the American society were elected between 1999 and 2008 according to the society journal whereas new Officers and Directors were being elected in from 2004 on according to IRS filings and the CV's of current Board members.)

One such dispute centers on the failure of the Theory of the Demographic Transition to predict the demographic realities of the year 2000 - increasing life expectancy and low, low fertility. The Handbook does not discuss this. There are others.

Another flaw in the Handbook is the presence of unacknowledged members of the various eugenics societies who are allowed by the authors of the Handbook to make statements without acknowledging their eugenic connections. This vitiates all the history presented. Lesley Hall, for instance, who wrote the chapter on English eugenics, is in 2011 a member of the Galton Institute Council. David J Galton who is quoted frequently in the Handbook, is a vice president of the Institute in 2011.

I do not think that a book which purports to be Handbook can be considered a good book when it misses so many important issues and when it blindly follows the interpretation of eugenic history offered by eugenic society members. As a period piece it has value.

Dr. David B. J Lambert
4.0 out of 5 stars Four Stars
Reviewed in the United Kingdom on February 26, 2016
Verified Purchase
Obviously an academic text, but even still some of the prose are bordering on impenetrable!!'
Read more
Report abuse

Peter Barelkowski
5.0 out of 5 stars Essential
Reviewed in Canada on January 4, 2015
Verified Purchase
Historic view of Eugenics around the world from Darwin to Hitler. Essential for anybody caring about the humanity.
Read more
One person found this helpful
Report abuse
See all reviews