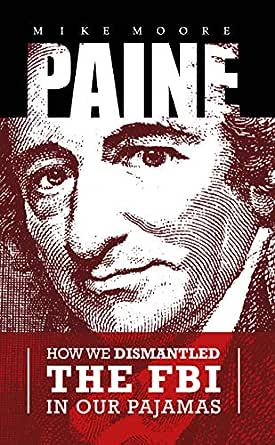 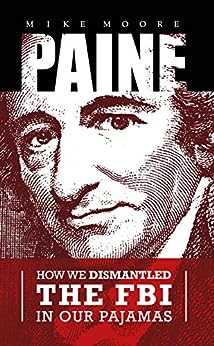 PAINE: How We Dismantled the FBI In Our Pajamas Kindle Edition

Mike "Thomas Paine" Moore today serves as True Pundit's chief Muckraker. Moore/Paine previously worked for the FBI, White House, DEA among many other Intel agencies and private concerns. He is the recipient of the coveted Gerald Loeb Award for journalism and 2-time Pulitzer Prize for Investigative Reporting nominee. As a Certified Fraud Examiner, Moore previously headed anti-money laundering operations for Citi in Chicago, Los Angeles and Delaware. He has an expertise in covert telecommunications, counterintelligence, HUMINT, and OSINT intelligence gathering. --This text refers to the paperback edition.

4.5 out of 5 stars
4.5 out of 5
184 global ratings
How are ratings calculated?
To calculate the overall star rating and percentage breakdown by star, we don’t use a simple average. Instead, our system considers things like how recent a review is and if the reviewer bought the item on Amazon. It also analyzes reviews to verify trustworthiness.

Hey Mimi
5.0 out of 5 stars A Staggering Punch to the Gut
Reviewed in the United States on October 31, 2018
Verified Purchase
A chilling read for people like me, who thought that government could not possibly get away with big lies because, hey, how could that many people keep a bombshell secret for years? Surely someone with a conscience would spill the beans and expose the truth about a government lying to the people. Mike Moore’s book lays it out there and exposes how the FBI and other gov agencies use their power to utterly destroy a person’s career, family and reputation. How they use fear to shut up the whistleblowers.

The author names real, high profile politicians (both Democrat & Republicans) who dared to speak up and were subsequently destroyed by both the Bush and Obama administration. It describes a horrifying revelation of how our Government lured whistleblowers to submit their stories to a secure website and used those submissions to surveil, investigate and silence the whistleblowers!

I felt sick as I read through these chapters, describing the treatment of people unfortunate enough to stumble across the truth about OBL’s whereabouts after 9/11. Sickened at the thought of all the young soldiers who sacrificed their lives and limbs hunting down a lie their government told them. Sick about the Americans in Benghazi, fighting for their lives, and waiting for the rescue team that was not on its way. This book felt like a staggering punch to the gut.

I’m sick to think of all the people in DC and in the media who surely know the truth, but are too terrified to speak it. I feel betrayed by them, but now understand their fear. I hope they were all waiting for SOMEONE else to break the ice and blurt out the ugly truth, so that they can finally speak up too. Well, now Moore has spilled the beans and I hope the rest of the media will have the guts to do the same
Read more
66 people found this helpful
Helpful
Comment Report abuse

P. malone
5.0 out of 5 stars PATRIOTS who love USA must read this.
Reviewed in the United States on October 30, 2018
Verified Purchase
The EVIL, corruption, & plants to destroy America have been in our midst for decades REVEALED by Michael Moore/ThomasPaine/TruePundit POWERFUL, horrific, heart-breaking, & infuriating. EVERY Patriot should read this book!
Read more
50 people found this helpful
Helpful
Comment Report abuse

Suzi
5.0 out of 5 stars Wow!! Can't put it down!!
Reviewed in the United States on November 2, 2018
Verified Purchase
I am just getting into this book, but had to stop to write an instant review...I am am an avid book reader, and can tell you within two pages if a book is going to grab me! This book not only will grab you, but will make you keep reading until it is finished!! I discovered True Pundit when searching for truth on YouTube. I soon discovered Michael Moore..or Thomas Paine as I knew him from listening to Mr. Jason Goodman....I was instantly hooked when he started speaking...then I wanted to learn more about him, and his story. This book will not disappoint you....he tells it in such a compelling way. I am a lifelong fan now. Thank you Mr. Moore for opening up on your life, and allowing us to learn just what the F.B.I. did to you, and your family....my love goes out to you in the loss of your mom.....heartbreaking the way they treated you! Good luck with this book...you deserve kudos!!
Read more
37 people found this helpful
Helpful
Comment Report abuse

Yo boy swag
5.0 out of 5 stars Must Read
Reviewed in the United States on November 1, 2018
Verified Purchase
This is a must read for every American, regardless of political affiliation. This book isn't about right or left, Republican or Democrat. This book reveals the TRUTH about the dirty deeds of the American Government & the media's willingness to help them cover it up.
Read more
34 people found this helpful
Helpful
Comment Report abuse

MSNightwriter
5.0 out of 5 stars Riveting and Deeply Disturbing
Reviewed in the United States on October 30, 2018
Verified Purchase
Must-read revelations for those concerned with preserving our country's sovereignty, constitution and rights.
Read more
27 people found this helpful
Helpful
Comment Report abuse

Merryday
5.0 out of 5 stars Ye Gods!!!!!
Reviewed in the United States on October 31, 2018
Verified Purchase
Wiped away the last few illusions I cherished about the FBI.
Read more
28 people found this helpful
Helpful
Comment Report abuse

Kari Donovan
5.0 out of 5 stars Shocked And Awed
Reviewed in the United States on November 1, 2018
Verified Purchase
I am shocked, but somehow I knew. I didn't want to accept that our government could be this diabolical because that means coming face to face to with rage over what we, what Americans, have lost. I have heard rumors of things discussed in this book over the years. Moore, because of his background, lends credibility to the stories of "the biggest cover-up in American history." I hope and pray for the Moore family to have peace. Listening to him talk about what his son went through, reading this book makes me emotional. America is better than this. I hope this book helps us get back there. Now we know what the Democrats and Never Trumpers are really doing. Great story. Must read. Great gift idea.
Read more
22 people found this helpful
Helpful
Comment Report abuse

Joshua Lefler
5.0 out of 5 stars Patriots
Reviewed in the United States on November 2, 2018
Verified Purchase
Thomas Paine and True Pundent are a blessing to Patriots across the United States!
Read more
22 people found this helpful
Helpful
Comment Report abuse
See all reviews