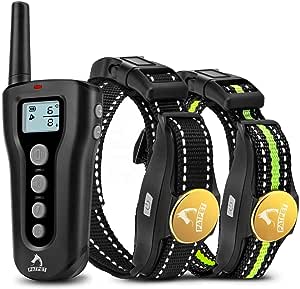 4.3 out of 5 stars
4.3 out of 5
260 global ratings
How are ratings calculated?
To calculate the overall star rating and percentage breakdown by star, we don’t use a simple average. Instead, our system considers things like how recent a review is and if the reviewer bought the item on Amazon. It also analyzes reviews to verify trustworthiness.

D Weaver
5.0 out of 5 stars Best available, especially for a stubborn dog
Reviewed in the United States on July 26, 2020
Verified Purchase
This is a great collar. We have tried several training collars and had issues with all of them. This holds a charge for a VERY long time. The collar stays tight unlike others we tried. The audible alarm is loud so it can be clearly heard. It gets quieter when it needs charged making it very easy to test the battery. Our stubborn husky would not stay in our yard or come when called until we used this collar. We have only shocked him once and now he comes 99% of the time as soon as he hears the audible alarm and always comes if we use the vibration. Don't waste your time or money on other collars. This is the best available, especially for a large breed, fluffy, or stubborn dog.
Read more
7 people found this helpful
Helpful
Report abuse

DracAttack
5.0 out of 5 stars For this price? Too good to be true? Not at all!
Reviewed in the United States on November 29, 2020
Verified Purchase
I have a 5 month old puppy, half English Shepherd and half Staffordshire Terrier.

Weird mix, I know, but our neighbor's dog got our dog pregnant. Before anyone yells at me, we found our dog abandoned when she was almost 5 years old and uncut - performing hysterectomies on older dogs can result in increased cancer chances and other issues, so we have just been very careful up to this point.

We kept one of the pups, and he's great except he does not understand he doesn't belong on the couch or bed, and WON'T STAY OUT OF THE CAT FOOD.

I have raised dogs all my life, and hate resorting to shock collars, have only had to do so maybe 2x in my experience raising pups.

Didn't know where to start, so I went obvious and went to Petsmart. Paid 120 dollars for some fancyschmancy collar.

Lemme tell you straight - it was a complete and utter turd. Hardly ever connected, was kinda pointless to sit and mash the button over and over again and have nothing happen. On 2 occasions, it would beep, then vibrate, then shock, a good 30 seconds after I gave up and just yelled at him instead, so it was actually negatively impacting him and making him terrified for no reason. The battery was terrible too, barely lasting 12 hours at a time.

Returned that, and then did what I should have done first and came here to Amazon and bought this.

Works like a charm. My only complaint is that sometimes, it doesn't connect and I have to cycle through both collars to get it to work, but it's honestly not a big deal, and there's no delayed action, so it's more of a patience issue than anything. And with 2 collars, I can keep one on him all the time, and have one charging.

The shock feels so much cleaner than the other collar did as well. It doesn't hurt like an electric shock, it's more like it just makes my muscles in my hand contract really hard.

The silicone tips are a nice touch, preventing any electrical burns on the pup's skin, and keeping the metal from rubbing and irritating.

9/10, would buy again, but thankfully, I don't think I'll need to. He is responding to the training quickly and happily.

sheri
4.0 out of 5 stars Great product but has few nuances.
Reviewed in the United States on October 27, 2020
Verified Purchase
I really like these collars for my two dogs. They responded to these quickly and I very rarely need to use the shock. They respond to the beeping as well as the vibrating. The only thing that I found it hard to do was that you need to toggle back and forth between dogs. If you are not careful, you can easily signal the wrong collar if the incorrect dog is selected. I wish there were separate sets of buttons for dog 1 and dog 2.

Also, the remote goes into sleep mode. In order for you to “wake it up”, you need to select a command. I typically push the beep however most of the time it will send the signal however, you can not see what dog is selected first. So if you want to shock initially, you may shock the incorrect dog.

It would also be helpful if the shock button was a different color and that it didn’t blend in with the three other buttons.

Overall, the dogs respond to this collar very well.

Charles A.
5.0 out of 5 stars Excellent Training Collar for the Homeowner
Reviewed in the United States on September 17, 2020
Verified Purchase
These collars work well. Easy to link them with the remote for dog 1 and 2. They've definitely got my dogs attention when I've had to shock them. Very easy to use and so far haven't had to charge anything yet.

Of course I don't know if they would undergo the riggers of professional k9 work but definitely a perfect product for the homeowner who as dogs.