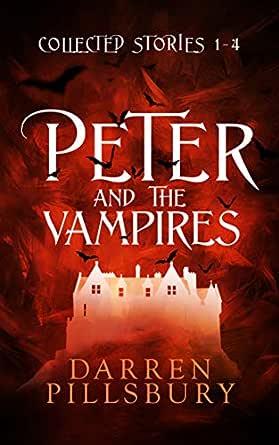 You've subscribed to PETER AND THE MONSTERS! We will preorder your items within 24 hours of when they become available. When new books are released, we'll charge your default payment method for the lowest price available during the pre-order period.
Update your device or payment method, cancel individual pre-orders or your subscription at
Your Memberships & Subscriptions
There was an error. We were unable to process your subscription due to an error. Please refresh and try again. 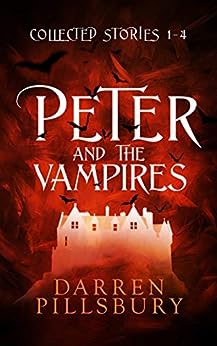 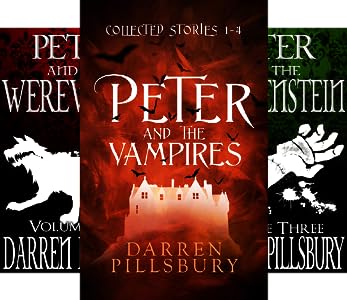 4.2 out of 5 stars
4.2 out of 5
204 global ratings
How are ratings calculated?
To calculate the overall star rating and percentage breakdown by star, we don’t use a simple average. Instead, our system considers things like how recent a review is and if the reviewer bought the item on Amazon. It also analyzes reviews to verify trustworthiness.
Top reviews

Steven Scott
5.0 out of 5 stars Greatness from small beginnings
Reviewed in the United States on November 11, 2020
Verified Purchase
Before he became the confident and awesome shinobi that he is, Peter Normal was just a normal [no pun intended] kid trying to acclimate after his mom moves them [he and his little sister Beth] back to her hometown. He had no idea about the dark legacy just waiting swallow him whole. It's not all bad, though. He also meets one Dill Bodindski, his only next door neighbor, who eventually becomes the Riker to Peter's Picard [though someone may dispute this claim in future installments].

I really can't praise this first book highly enough! After I read and re-read the first book, I immediately went to buy every single one that was available at the time. The characters [though young] are well rounded, the monsters are menacing in all the right ways and the overarching plot will almost certainly grip you so tightly that it will take the jaws of life to free you!

M. Zimmerman
4.0 out of 5 stars I liked it, very entertaining!
Reviewed in the United States on September 4, 2014
Verified Purchase
While this was probably written for a younger audience than me, I'm an avid reader. I will download and try any free Kindle Top 100 best seller book, and this was well-reviewed. I actually liked this well enough to purchase the second and third books, so that's saying something! Each book is a collection of short themed stories starring the same characters, Peter and his lovably obnoxious side kick Dill, plus Peter's monstrous baby sister Beth, his mother and spooky grandfather, and others that come and go. The author builds with each successive story, adding callbacks to prior stories, but each one is well-written enough to stand on its own. Every story has its own theme and multiple chapters. Very well written, from character development to dialogue. Peter and Dill are supposed to be 9 and 10 years old, and while they do come off as cheeky as teenagers and smarter than their ages, it only adds to the enjoyment of the story (stories?). Might actually be too scary for some youngsters, but there's no cursing and nobody dies. I find this a very light and fun read...plus I love monsters, and Peter and especially Dill's antics make me giggle!
Read more
2 people found this helpful
Helpful
Report abuse

J. E. Helms
4.0 out of 5 stars Chills and Thrills Without Blood and Guts
Reviewed in the United States on June 8, 2016
Verified Purchase
The problem with getting anything for free is that I'm more inclined to give it a good review than I would be with something I paid for. Fortunately, in the case of this book, it actually deserves the rating I've given it.
This is more a collection of short stories than a novel but they run consecutively. The stories deal with two different varieties of the Undead, a straight up monster and the Faerie. Though they're definitely YA they were also a fun read for this adult (OA).
The character Dill is annoying and was almost enough to make me stop reading before I'd gotten halfway through the first story, Peter and the Dead Men, but I struggled past him and was glad I did. Still, I wish there were fewer references in all the stories to his pants and the biological occurrences that may or may not happen within them. Similarly, all of the other adults, except for one, are annoyingly oblivious but that appears to be a staple of YA fiction so…
The stories all give you a little chill without resorting to excess gore, violence or pure horror (except for the girls in Peter and the Vampires; they're creepy with a capital 'C', italics and bold print). I think this would be a good, fun read for younger readers as well as older adults who want a break from slashers, splatterers and soul-stealers.
Read more
4 people found this helpful
Helpful
Report abuse

There are times when I am tired and not in the mood for drama or serial killers or long erotic scenes. Or maybe, it’s a rainy day when I want something light and whimsical. On those days, I pick something like Peter And The Vampires although obviously, I am not a child. I have always loved the Harry Potter books, and movies such as Goonies and The Lost Boys. I downloaded this book never having read anything by this author, and laid it by for a rainy day, which was yesterday. And needless to say, I loved it. My favorite character is Dill, Peter’s best and only friend; Dill is first to run into trouble and first to “Pee his pants” when he finds it. And I disagree with the reviewer who said that the book has no positive female characters. She probably feels that a positive female character has to be a successful lawyer or doctor. I found Peter’s mother to be a loving, hard-working mom facing life with courage and determination. The main character, Peter, is loyal and courageous. The book is funny, fast paced, and of course, childish!
I Love It.
Read more
4 people found this helpful
Helpful
Report abuse

Alysa H.
3.0 out of 5 stars Fun scary tales, but not without problems
Reviewed in the United States on April 25, 2014
Verified Purchase
This collects the first four installments of the "Peter and the Monsters" series. Although I liked some more than others, I found them collectively to be a quite good set of stories for kids who like a little funny with their scary -- or, a little scary with their funny! -- and pretty well-written.

Pillsbury is good at building up information about these characters and their world from book to book, so that while each story is self-contained, each story builds on the last and reveals little pieces of a larger arc that is sure to come to fruition later.

My only real complaints are A) the pacing can be a little slow at times, B) Dill's slapstick humor occasionally goes overboard into tediousness, and C) the relative lack of female characters throughout. When there are females (Mercy Chalmers; Peter's mother and sister), they're not portrayed particularly positively. The intended audience for these stories is, say, 10 year old boys, but that's just an excuse, and not necessarily a good one.

My individual ratings for these stories are mostly 4-star, but I'm rating the collected edition 3-stars due to the meta-issues listed above. This collected edition is available free. I will purchase the next collection someday, when my daughter has graduated from picture-books to short novels -- assuming the next collection fixes some of the gender problems, as I'm not sure I want her to get too invested, otherwise -- but I'm not sure whether I'll be reading more of the series just for myself.
Read more
3 people found this helpful
Helpful
Report abuse
See all reviews

Buddy
5.0 out of 5 stars and I'm so pleased I did
Reviewed in the United Kingdom on February 12, 2016
Verified Purchase
I got this for free, and I'm so pleased I did. Well written, and very entertaining. Be prepared to read from cover to cover, as it's un-put-downable! I'm totally hooked and will deffinitely buy more as well as putting on my wish list for Xmas, birthdays and any other excuse I can find. I enjoyed the plots and fast pace of the stories. Also, the interaction between Peter and his friend, Dill, which I found slightly reminiscent of the old Jennings and Darbyshire books, which my family used to love. As one who is in the process of writing a children's book, I read piles of the things every week. And can honestly say these are the best I have found. I think anyone would enjoy them, up to . . . er . . . sixty-six years old, at least. After that - depends on reading ability. Hope I live long enough to read them all. Thank you Darren Pillsbury.
Read more
One person found this helpful
Report abuse

Emma Baldwin
5.0 out of 5 stars Scares, drama and laughs! The perfect mix!
Reviewed in the United Kingdom on November 11, 2020
Verified Purchase
I stumbled across this series of books a few years back and have read them over and over again. Each character and their families have their own narrative. They each have issues as well as dealing with monsters! They do not fail to entertain! There is enough scares to give you the chills but also lots of laugh out loud moments!
Read more
Report abuse

Braiben
5.0 out of 5 stars A fantastic story, much better than i expected!!
Reviewed in the United Kingdom on February 10, 2013
Verified Purchase
I viewed this book as a childrens book, something at 25 i was to old for....well i was wrong...i loved it and will be buying the rest!! It kept me up into the early hours of the morning, i really cant wait until my little girl gets a little older and i can read this to her. Thank you for such a great story!
Read more
Report abuse

Lynzy :-)
5.0 out of 5 stars Must read So Good
Reviewed in the United Kingdom on November 13, 2020
Verified Purchase
This story is amazing..humour, suspense, friendship and plenty of action Loved it !!
Read more
Report abuse
See all reviews