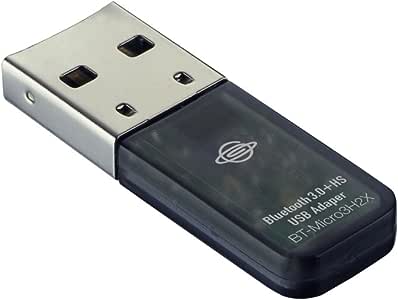 Brand: Planex
2.5 out of 5 stars 37 ratings
Currently unavailable.
We don't know when or if this item will be back in stock.

USB adapter has been housed in a small length of 34.7mm, the two functions "150Mbps maximum IEEE802.11n /" high-speed Wi-Fi feature is a next generation high-speed Bluetooth standard "Bluetooth ver. 3.0 + HS" and The industry's first! Micro USB combo adapter is the size of support both, "Bluetooth" & "Wi-Fi" two one role. Without taking up a 2-port USB port on the PC, simultaneous use of both features is possible in a port.

You can reduce the interference by providing support for 802.11 Co-existence, even if used in conjunction with the 802.11 standard to use the band 2.4GHz. At the same time also use Wi-Fi and Bluetooth, you can ensure a stable communication, respectively.

Corresponding to the (High Speed) standard next-generation high-speed Bluetooth, which was formulated in April 2009, Bluetooth Ver. 3.0 + HS. Eight times as fast as the traditional "Bluetooth ver3.0 + EDR", communication can be made ​​of stable, high-speed (theoretical) 24Mbps maximum. Product that corresponds to the next generation standard that combines the ease of pairing of Bluetooth, both the high speed of the Wi-Fi. It also support Bluetooth Ver. Also 1.2/2.0/2.1/3.0 + EDR Bluetooth is a traditional standard.

Motorola employs highly stable stack. The Bluetooth driver stack for Windows has been adopted by Motorola with excellent stability.