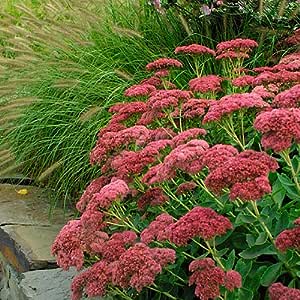 Brand: ~MY SEEDY NEEDS~
2.6 out of 5 stars 5 ratings
Currently unavailable.
We don't know when or if this item will be back in stock.

~HEIRLOOM VARIETY~ ***SEDUM*** (Perennial)(Zones 3-9) "Autumn Joy" variety. 15 seeds/pack. Grows to about 2-3'. ~Fabulous blooms in late summer. Full sun & a 'must-have' in the rock garden with its wonderful "succulent-type" foliage. The flowers vary in color from dark pink to deep red/rust & good in Zones 3-9. ~LEVEL of EXPERIENCE NEEDED FOR THESE SEEDS: Moderate Level~ I am a Master Gardener from Wisconsin (ZONE 4) & I want to share many of the perennials, annuals, herbs & veggies from my 3rd generation, organic yard with you. Many of my plants are heirloom varieties that have been on the property since 1940 when my Grandfather built the house. Many I do not have the true name for, just what has been passed down from Gramma, to Mom, to me. I owned my own greenhouse for 13 years & I will give you step-by-step planting directions with each purchase for the gardening amateurs. I gear my sales towards the common gardener, small scale, but I do have a couple "Bulk" for larger scale enthusiasts.

2.6 out of 5 stars
2.6 out of 5
5 global ratings
How are ratings calculated?
To calculate the overall star rating and percentage breakdown by star, we don’t use a simple average. Instead, our system considers things like how recent a review is and if the reviewer bought the item on Amazon. It also analyzes reviews to verify trustworthiness.
Top reviews

Brandon McGinnity
2.0 out of 5 stars everything looks like dust. The seeds came in a small plastic ...
Reviewed in the United States on February 24, 2015
Verified Purchase
Should have listened to the other reviewer; this seller is mighty stingy with the seeds, which these plants must produce in abundance (look at those flower-packed flowerheads!). They are absolutely tiny; I looked with a magnifying glass, I *think* there were 15 seeds there, but I can't be sure. Some might instead have been bits of the petal or other plant parts, which are also in the baggie with the seeds; everything looks like dust. The seeds came in a small plastic ziplock baggie, which the seeds clung to with static electricity, making it very difficult to pick them up even though I had cut it open to lay flat, and was using tweezers. I gave up after a while and sorta brushed them over my seed flat.

I admit the seller states that s/he only gives 15 per packet, but, s/he should take this as constructive criticism and put more in. A little generosity goes a long way, especially given the difficulty in handling these, and an unknown germination rate.

Definitely don't breathe when handling these, or they will be gone and you're out $3.50, 6 with shipping, to say nothing of wasted time, which is important because Spring is coming and I have to get these planted NOW, or I'll be too late. If they don't sprout, that's going to be disappointing.

If I get plants out of this, I'll come back and give it an extra star and leave a note here saying they grew, and how many.

Jennie
1.0 out of 5 stars $7 for specks 100 times smaller than ants
Reviewed in the United States on April 24, 2017
Verified Purchase
completely agree with other reviewers. The seeds are like dust. for 15 (?) of them, it's merely non existent. And for $7 to buy "air" dust? it's extremely over priced and I do not recommand this to anyone. Find a good seller with honest pricing is recommended.
Read more
2 people found this helpful
Helpful
Comment Report abuse

DF
5.0 out of 5 stars This is a great flower to brighten up your garden.
Reviewed in the United States on September 12, 2016
Verified Purchase
No doubt I will love it more if and when the seeds sprout, but I was a bit surprised at how few (15) and how very, very tiny they are. Not that that is the fault of the person selling them. But I am afraid that, being so tiny, they may give me trouble when I sow them. Will mix them with fine sand to make it easier to scatter them on soil. I had a clump of these flowers several years ago, but they didn't last very long, so I am looking forward to doing better this time. It makes a great accent in the garden.
Read more
Helpful
Comment Report abuse

2readornot2read
2.0 out of 5 stars Should be larger quantity of seeds
Reviewed in the United States on April 29, 2014
Verified Purchase
Be warned: The seeds apparently are so small they look like dust, and there were so few in the package, I have no idea if they even made it to my soil. Forget thinking you can separate. Ridiculous. And so far I haven't seen any sprouts.
Read more
6 people found this helpful
Helpful
Comment Report abuse