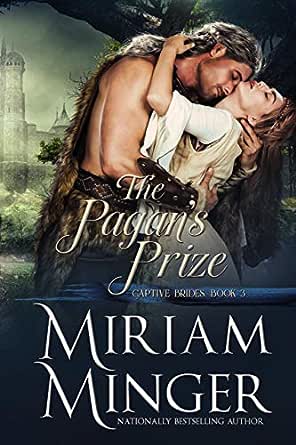 You've subscribed to Captive Brides! We will preorder your items within 24 hours of when they become available. When new books are released, we'll charge your default payment method for the lowest price available during the pre-order period.
Update your device or payment method, cancel individual pre-orders or your subscription at
Your Memberships & Subscriptions
There was an error. We were unable to process your subscription due to an error. Please refresh and try again. 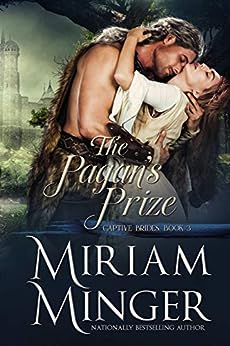 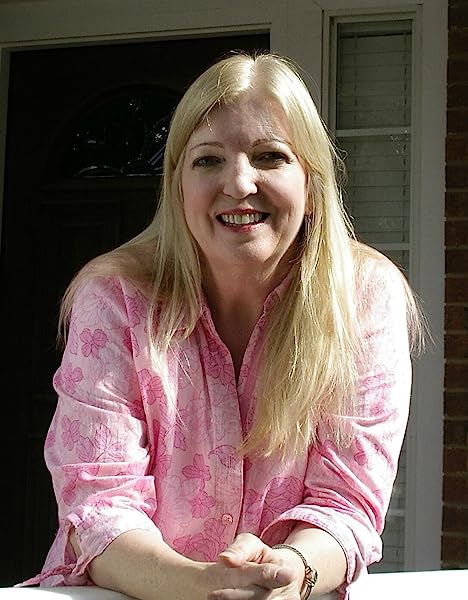 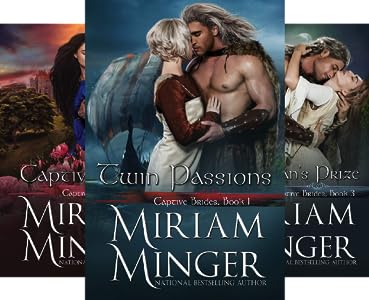 Known and loved for her sensual stories that have captured the hearts of readers everywhere, Miriam Minger has earned rave reviews from Romantic Times, The Atlanta Journal-Constitution and more who have praised her bestselling romance novels as "Brilliantly Imaginative," "A Marvelous Tapestry of Plots," and "Outstanding!" Discover more about Miriam Minger's award-winning books at miriamminger.com. --This text refers to an alternate kindle_edition edition.

Ms. Minger transports you to medieval times with the turn of a page! Her characters are strong and independent with just the right touch of vulnerability. Ms. Minger is a wonderful choice for those who have never been introduced to the medieval romance or those hardened fans who demand the best. A brilliant work, a memorable read!  Diane Potwin -- Literary Times
--This text refers to an out of print or unavailable edition of this title.

4.3 out of 5 stars
4.3 out of 5
136 global ratings
How are ratings calculated?
To calculate the overall star rating and percentage breakdown by star, we don’t use a simple average. Instead, our system considers things like how recent a review is and if the reviewer bought the item on Amazon. It also analyzes reviews to verify trustworthiness.
Top reviews

Ellie's Ruthless Reviews
3.0 out of 5 stars Very repetitive bland read
Reviewed in the United States on November 11, 2019
Verified Purchase
Good writing and à somewhat interesting male lead make up for it. I like that the female has some wits about her, but I found this book on a warrior heroines reading list on good reads and it is not!!! She is very much a damsel and I think is carried throughout more of the book than she walks. Solid writing kept me surging through the book and there were some action scenes but overall I wish I could not have read it and saved myself the time lol
Read more
13 people found this helpful
Helpful
Comment Report abuse

Lois Powell
4.0 out of 5 stars A love story set in medieval times.
Reviewed in the United States on September 5, 2020
Verified Purchase
The Pagan's Prize is hard to put down. Here is a tale of a kingdom torn apart by war. The daughter of the prince on one side was captured by a highly placed warrior for the other side. Their relationship began with hate. The princess tried repeatedly to escape, but was stopped each time. The warrior vowed to never marry, but was ordered to do so by the king. Through much anger, betrayal and misunderstanding, they found they loved each other. This story has a surprising ending. Don't miss this one!
Read more
One person found this helpful
Helpful
Comment Report abuse

Jeanetta Monfort
5.0 out of 5 stars To love or not
Reviewed in the United States on September 17, 2020
Verified Purchase
Rurik was a warrior sent to spy out the strength of his Prince's rival and possible usurper. Zora was the bastard half sister to princess Hermione. Jealousy drove Hermione to plot Zora's abduction in order to remove her from their father's court. Rurik saves Zora from a brutal raping and returns with his men to the Grand Prince. As the plot thickens mistrust and suspicions grow while Zora makes multiple attempts to escape. Does she succeed? A great read.
Read more
One person found this helpful
Helpful
Comment Report abuse

KRM
3.0 out of 5 stars Fast and fun read
Reviewed in the United States on August 27, 2020
Verified Purchase
Enjoyed this read about Viking Rurik of Russia year 1024. He kidnaps Zora the bastard daughter of his enemy. Both are stubborn and passionate and resist falling in love. It was predictable and the cover didn’t match the characters descriptions.
Read more
One person found this helpful
Helpful
Comment Report abuse

Lady8ug9
4.0 out of 5 stars REALLY Good!!
Reviewed in the United States on August 24, 2020
Verified Purchase
What a spit-fire Zoe’s is. And when she meets up with someone like Ruk?? Oh yeah. Strong chemistry. Easy read. A real page turner. Wonderful story that will keep you at the edge of your seat. Follow this author she spins a good story.
Read more
One person found this helpful
Helpful
Comment Report abuse

Regan
4.0 out of 5 stars Entertaining Viking Tale Set in Russia!
Reviewed in the United States on December 20, 2012
Verified Purchase
This was my first by Minger and it's a worthy Viking tale with a twist--it's set in Russia in 1024.

Viking warrior Rurik Sigurdson, a Varangian (mercenary) on a mission for Grand Prince Yaroslav, ruler of Rus land (Russia), plans to to spy on the armies of Yaroslav's enemy--his younger brother, Prince Mstislav. In the process, Rurik unknowingly captures Princess Zora, Mstislav's much loved bastard daughter. Rurik believes she is the concubine of another man who he can use to gain intelligence. Zora has temporary amnesia that puts her in a dazed state most of the time. In a harebrained plan to find out who her lover is, Rurik makes love to the dazed woman only to realize she is a virgin (really it's rape since she couldn't knowingly consent). Zora wants to escape to return to her father and her betrothed, but Yaroslav (her uncle) forces her to wed Rurik.

I loved Zora. She was feisty and courageous and took no guff from Rurik. That is, until the marriage, after which she crumbled whenever Rurik touched her. Rurik was a reasonable man and a strong leader of his people, though he treated woman as mere comforts (until Zora). He kept 6 concubines who had given him 5 children. Into this comes innocent Zora. There were some improbable moments (like when his concubines were fine with being married off to Rurik's men), but it is well written, fast paced and held my interest.

Her other Viking novel is TWIN PASSIONS, which I plan to read.
Read more
5 people found this helpful
Helpful
Comment Report abuse

Kindle Customer
4.0 out of 5 stars Great Story
Reviewed in the United States on August 25, 2020
Verified Purchase
I really liked this story eventhough these characters frustrated the heck out of me. Two more stubborn people if there ever was. Funny at times on who could best who. Love took many turns but as usual Love won.
Read more
One person found this helpful
Helpful
Comment Report abuse

Kath (sunshine)
5.0 out of 5 stars Thrilling Viking Romance
Reviewed in the United Kingdom on January 1, 2013
Verified Purchase
This is another great story from Mirian Minger, she has such an incredable way of transporting the reader to where ever the story is, and as this one is set in Russia, thats where I have been.

Such a wonderfully exciting story of a Princess named Zora. On her way to wed her bethrothed, only to be betrayed by her half sister. Zora's crimes no other than being her fathers daughter, born of the women he loved. My heart was in my mouth many times. Zora was taken to a slave trader, with instructions to be rid of her. Not setling for what her sister has planned she tries to escape only to end up catching the attention of a beast of man, who has no scruples about raping a women. Zora tries to fight him and runs, the beast on her heels, who will help her, any? she runs smack into Lord Rurik, something about her, her beauty perhaps, but his interest is pricked and he not only saves her, but takes her as his captive, realising she maybe of some worth to use as a pawn to thwart his enemy who turns out to be her father. That may of been Lord Rurik's intention but perhaps the Gods deem otherwise.

This is a tail of twist n turns, and kept me hooked, how I loved Zora's antics and plots, they had me laughing at times. I am sure you will enjoy this story too.
Read more
2 people found this helpful
Report abuse

lornaA
4.0 out of 5 stars Enjoyable
Reviewed in the United Kingdom on August 21, 2020
Verified Purchase
A good story, surprisingly I enjoyed it. The love scenes were authentic and quite steamy. I didn’t like the fact the hero had lots of concubines who had children for him. Clashed with my monogamous tendencies personally.
Read more
Report abuse

Joyce
3.0 out of 5 stars Okay
Reviewed in the United Kingdom on March 24, 2013
Verified Purchase
I bought this because I'd read two other books by the author and loved them. Unfortunately this wasn't as good. I'm not exactly sure what it was about this book but I didn't really enjoy. Maybe it's because I'm not familiar with the history of the region, or maybe it's the fact that I like clever, sassy heroines and the heroine in this book was a disappointment. Yes, she was brave and very beautiful indeed but I tend not to enjoy books where the heroine isn't witty to some extent so I didn't enjoy this one.
Read more
Report abuse

Foxy
5.0 out of 5 stars brilliant
Reviewed in the United Kingdom on July 17, 2014
Verified Purchase
Absolutely brilliant book everything you could ask for. A different genre and very refreshing. Highly recommended excellent read
Read more
One person found this helpful
Report abuse