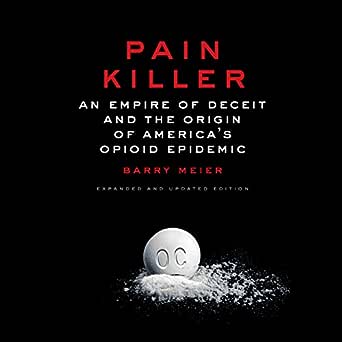 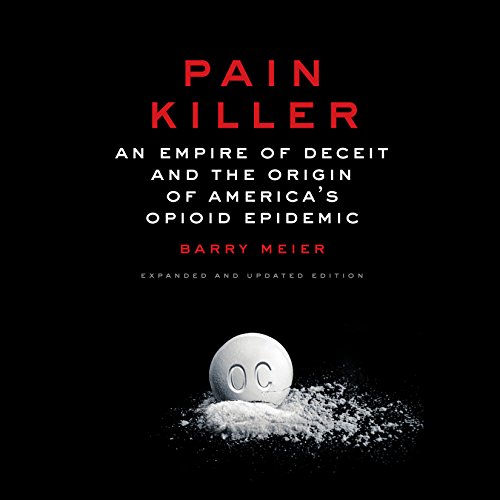 Pain Killer: An Empire of Deceit and the Origin of America's Opioid Epidemic

Franklin the Mouse
5.0 out of 5 stars Addiction's Enablers
Reviewed in the United States on September 15, 2018
Verified Purchase
'Pain Killer' is about greed. It's that simple. Without question pharmaceutical companies have improved the quality of life for many people. However, not everything they do or have done can be viewed as spewing out rainbows and sunshine, not by a long shot. Big Pharma are huge corporate entities focused first-and-foremost on maximizing profits and keeping shareholders happy. Concern for people is secondary. While Mr. Meier's investigation focuses on the Sackler family and Purdue Pharma's marketing of OxyContin, the reader might want to keep in mind that the malfeasance described is not a pharmaceutical outlier.

The well-respected New York Times reporter, Mr. Meier, specialized on the intersection between business, medicine, and public health. 'Pain Killer' is a compact 198-page explanation of how the OxyContin drug epidemic unfolded. The very first paragraph in the book took my breath away. It describes a few families' struggles because of OxyContin but focuses mostly on Purdue Pharma and how they marketed a drug knowing full well their little pills were highly addictive and wreaking havoc on communities. The book covers such topics as pill mills, the nature and history of pain, iatrogenic addiction, the pain-management movement, opioids, career bribery, lobbying junkets, the misuse of science, influence-peddling by doctors paid by drug companies, and the FDA's and DEA's actions towards Purdue Pharma. There are everyday heroes in the book who were ringing the bell very early on about what OxyContin was doing to people, but the executives at Purdue Pharma resorted to public-relations efforts, legal manipulations, job offers, and money to keep the OxyContin gravy train rollin' along.

The book is a fast, interesting, very educational read and should have you so upset that you'll be frothing at the mouth while reading it. These unethical executives and the sales representatives are the reason the current heroin epidemic is raging across our country. Will any of them eventually be stripped of their wealth and spend a great deal of time in the hoosegow? Well, let's just say there's a better chance of Janis Joplin going on a comeback tour.

JENNIFER A GRUNBECK
5.0 out of 5 stars Legal Drug Dealers
Reviewed in the United States on February 6, 2019
Verified Purchase
2019, opioid crisis Thank You Perdue, not the chicken company Perdue Pharma! Follow this journey through the beginnings of the opioid crisis, who is to blame, could it of been averted? Read this and you will be shocked at the heartlessness of a small corporation and the absolute greed of its family that owns it. Every system failed to stop this over and over again! Deals were made at the expense of the safety of the American public, doctors were mislead. Some doctors aided the crisis under the protection of pain management. This book will have you questioning how our government was protecting us and how many failures were met with greed, and complete misunderstanding of the drugs they were prescribing.
Read more
3 people found this helpful
Helpful
Comment Report abuse

Elizabeth
5.0 out of 5 stars An Important book to read.
Reviewed in the United States on August 22, 2018
Verified Purchase
Terrifying tale of the cynical capitalist behavior on the part of Perdue Pharma that has created the opioid crisis that has and continues to destroy so many lives in our country and abroad.
Read more
8 people found this helpful
Helpful
Comment Report abuse

jeanne kanfer
3.0 out of 5 stars Pain Killer
Reviewed in the United States on December 8, 2018
Verified Purchase
The book was interesting but contained same information as other books on the opiate epidemic. I felt other books such as Dopesick were easier to read. This book casts the spotlight on the Sackler family.
Read more
5 people found this helpful
Helpful
Comment Report abuse

J. Myers
5.0 out of 5 stars Devastating
Reviewed in the United States on July 24, 2019
Verified Purchase
That the the drug companies, led by Perdue, have killed so many more Americans than the 9/11 attacks (2,996 immediate deaths) or the Vietnam war (58,220 American military casualties) vs. 200,000 for OxyCodone, over *20* years, out of sheer greed, is a total failure of American governance. It is true that cigarettes killed far more, and we didn't pay attention to that for far too long. Yet, this is so focused, over such a comparatively short time, that it wouldn't make good fiction -- fiction has to be believable. Thank you, Mr. Meier. Read it.
Read more
Helpful
Comment Report abuse

BC Cloutier
5.0 out of 5 stars The sad truth about the Sackler family
Reviewed in the United States on July 12, 2019
Verified Purchase
$14 billion — with a “B” — and the very wealthy Sacklers insist that they bear no responsibility for the millions of deaths that have resulted from their company’s aggressive promotion of OxyContin. If their private jet crashed and the entire family perished, it would be poetic justic.
Read more
One person found this helpful
Helpful
Comment Report abuse

Kindle Customer
4.0 out of 5 stars A Current Look at the Current Problem
Reviewed in the United States on March 20, 2019
Verified Purchase
I heard the author interviewed on NPR and was intrigued, especially about the Sackler family's idea for marketing painkillers. The book is direct and a good read.
Read more
One person found this helpful
Helpful
Comment Report abuse

Amazon Customer
5.0 out of 5 stars Origin of the Opiod Epidemic
Reviewed in the United States on June 7, 2019
Verified Purchase
This is a thorough and informative read. I'd been searching for a book about the opiod epidemic, but could only find narratives about the sufferers. "Painkiller" dives into the origin and causes of it, beginning with the destigmatizing of using narcotics to treat pain patients, the development of oxy-contin and eventually Arthur Sackler and his purchase of Purdue Pharma. Very informational and yet a quick, fascinating read.
Read more
Helpful
Comment Report abuse
See all reviews from the United States

P. A. Buchan
5.0 out of 5 stars An Excelent Summary of the US Opioid Crisis
Reviewed in the United Kingdom on January 4, 2019
Verified Purchase
There are 2 other books, "Dopesick," and, "American Overdose," which are more detailed and very personal, where they talk to familys and friends of people no longer alive because of this crisis. That makes the feeling of the lack of accountability very hard to take. The injustice of it all, that the drug companies are not held accountable for the carnage they have caused.
Barry Meier's book is equally as important because if you a require 192 page summary of the crisis with all the; characters, companies, reasons, causes, lack or response, lack of accountability and you only want to read 1 book. Then this is the one. If this read makes you interested in the subject then the other 2 that i have mentioned provide a level of detail as they are very specific to the epicentre of the epidemic in West Virginia with real people and a better understanding of the causes.
I learned a new word reading these books, "iatrogenic," Which means, "illness caused by medical examination or treatment." Where you can go to the doctor with a pain and they give you such strong opioids to cure that pain, that when you follow the recommended treatment, you can become addicted. That is whats so wrong, normal people, go to the doctor for treatment after a sports injury, fall, car crash etc can take pain killers and become addicted to them.
Shame on you Purdue Pharma and the Agencies that allowed it to happen, because money talks.