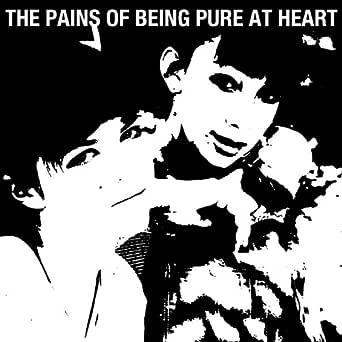 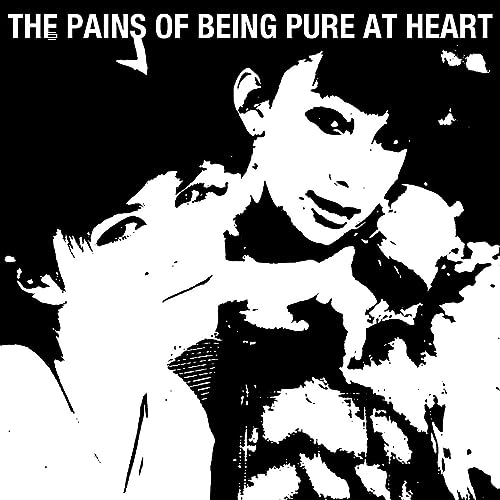 The Pains Of Being Pure At Heart

Scott M.
4.0 out of 5 stars One of the best new British bands from the U.S.?
Reviewed in the United States on February 23, 2009
Verified Purchase
Oddly, this American band from NYC is listed under Amazon's British Alternative new releases section but it's rather fitting as they bear a resemblence to some great acts from the late 80's/early 90's UK music scene. You can hear a little My Bloody Valentine in the track Contender, The Smiths in Stay Alive, and the Jesus and Mary Chain in Gentle Sons. I'm not sure if the band was directly influenced by previously mentioned artists, but I really like the sounds they are mining. Fuzz infused pop jingles that get your head bobbing. Check out Young Adult Friction or Stay Alive as a starting point and if that suits you, you'll probably like the rest of the record. Although the album lacks some variety in terms of tempo and instrumentation, it's a very cohesive collection from a new band that I hope to hear more of in the future.
Read more
17 people found this helpful
Helpful
Comment Report abuse

A. Giuoco
5.0 out of 5 stars Noise pop is great
Reviewed in the United States on April 9, 2009
Verified Purchase
For anyone who loved the noise pop of the late 80s/early 90s, this is your album. TPoBPaH seem to pull from bands like My Bloody Valentine, the Lemonheads and Joy Division to create something familiar, but almost perfect in its execution. I can't seem to get the volume for "Come Saturday" loud enough. You just want to blast it out of your speakers as loud as you can. One or two songs on the CD fall short of greatness, but overall this is a solid first record and a great band to watch.
Read more
7 people found this helpful
Helpful
Comment Report abuse

Geoffrey R. Balme
4.0 out of 5 stars Contagious popish rock
Reviewed in the United States on November 22, 2009
Verified Purchase
As if My Bloody Valentine forgot to release a late 80s collection of songs. A warm guitar buzz imbues everything, nice standard backbeats and softly sung lyrics take you back (if you're old enough) to about - oh mid 80s - to 1990ish. It's refreshing to have bands producing instrument driven music, and I have been surprised by very likable rock songs on this album. It's a little too gentle and dreamy for my tastes which in my middle age have turned to less predictable aural pleasures, but if you like this you might try the aforementioned "shoe-gaze" bands of those years (Telescopes come to mind) but also more recent Deerhoof material.
Read more
One person found this helpful
Helpful
Comment Report abuse

Marc Legros
5.0 out of 5 stars Best of noizy pop?
Reviewed in the United States on October 2, 2009
Verified Purchase
Some people will always claim that the noisy pop era (Field Mice, My Bloody Valentine, Ride, Lush...) they used to know cannot be topped and that the Pains of Being Pure at Heart are just a band of followers /imitators that haven't created anything. Sure. Do not believe them. I am pretty confident that if this record had been released 20 years ago, it would have been a pillar of the movement and shown today as emblematic of that very period of time. The melodies are terribly catchy, the format of the song is just short enough so the only option is to replay them immediatly and their sound has the perfect grain to give sheavers to any distorded pop song lover.

My album of the year so far...

John
5.0 out of 5 stars The Feelies Gone Shoegaze
Reviewed in the United States on April 23, 2010
Verified Purchase
I can see the purists don't want this album compared to the 90's shoegaze greats (MBV, Lush, Ride, Pale Saints, etc)
but there is a definite link I hear. However I get more of a Feelies vibe (brilliant 80's jangle pop band)
But the thing I am totally diggin (and saves them from the also-rans) is their melodic sense in these tunes. Thats
where I hear the Smiths and Sundays influence. This album is so damn catchy... anyone into the bands I mentioned
should give them a chance. I just ordered the EP, hope it's as good as the album.
Read more
2 people found this helpful
Helpful
Comment Report abuse

Ed Wood
4.0 out of 5 stars Welcome throwback sound
Reviewed in the United States on March 11, 2009
Verified Purchase
Heard these guys on Sirius-U the other morning and instantly though of early LUSH and Jesus and Mary Chain. In today's world of scream-O, cookie-cutter corporate-compositions, TPoBP has provided as welcomed relief to this child of the 90s.
Read more
6 people found this helpful
Helpful
Comment Report abuse

Alan Wilson
4.0 out of 5 stars Another great album
Reviewed in the United States on September 6, 2012
Verified Purchase
My favorite from this band. Every album good so far and it's hard to complain for 5 bucks! Turn it up and enjoy!
Read more
Helpful
Comment Report abuse

vinylsnotdead
5.0 out of 5 stars Lo and Behold..
Reviewed in the United States on July 3, 2012
Verified Purchase
Bought this item, Lo and behold i got the Limited Edition Black/White Swirl Vinyl. :-) Four version came out in the market Black, Black/White Swirl, White and Clear Vinyl.
Read more
Helpful
Comment Report abuse
See all reviews

Glenn
5.0 out of 5 stars they love
Reviewed in the United Kingdom on December 11, 2014
Verified Purchase
bought as a present. they love it
Read more
Report abuse

D. Cunningham
4.0 out of 5 stars MBV meets Shoegaze pop perfection!
Reviewed in the United Kingdom on May 31, 2009
Verified Purchase
Saw these guys playing Fortuna POP! at the Lexington London and thought Id check out the album. Boy was I not disappointed.

This thing is on heavy rotation at my house. They are like the best elements of early 90s Indie/Shoegaze and well worth a splash for any fan of MBV/ pre britpop indie.
Read more
Report abuse