You've subscribed to Asylum Series! We will preorder your items within 24 hours of when they become available. When new books are released, we'll charge your default payment method for the lowest price available during the pre-order period.
Update your device or payment method, cancel individual pre-orders or your subscription at
Your Memberships & Subscriptions
There was an error. We were unable to process your subscription due to an error. Please refresh and try again. 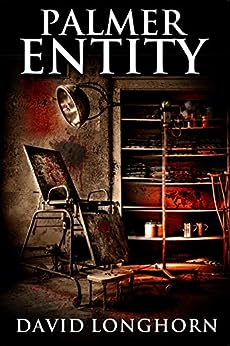 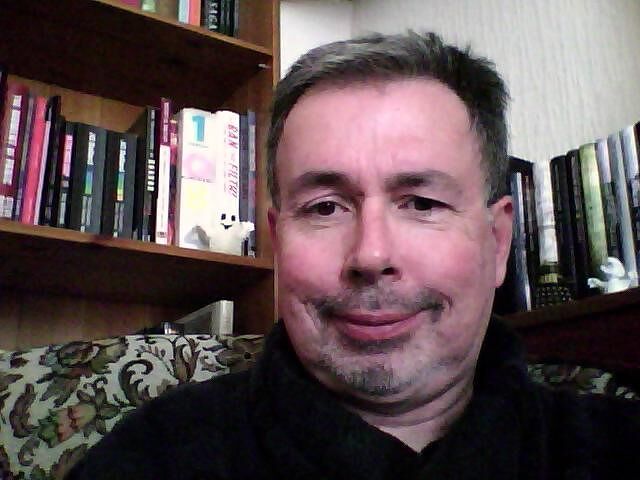 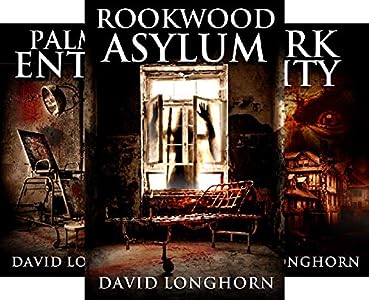 "Is it me?" Joe asked, raising his voice a little, "or is that stink getting worse? Maybe it's a really ripe homeless guy."

They reached the automatic camera at the threshold of the East Wing. While the noxious smell was indeed much stronger, there was no sign of the mystery intruder. They moved cautiously into the room, and Joe crouched to get a better angle. The cameraman put one hand on the floor to steady himself, then recoiled in disgust.

As Joe focused on an oval patch of brownish fluid, Paul scanned the rest of the floor. He saw a line of similar patches leading past the fixed camera, out of the room, and into the corridor. He pointed this out to the others.

"This is not regular mud," Joe grunted, wiping his fingers on his jeans. "And it stinks, like rotten meat."

There was a faint sound of movement echoing down the corridor. All three men froze and stared at the inner doorway. Then, still without speaking, they began to retreat to the entrance. Lucas, backing up clumsily, stumbled against the fixed camera and knocked it off its tripod. The accident prompted a volley of curses from Joe, followed by an argument, and for a moment, something like normality seemed to be restored.

Then Paul felt the temperature start to fall. The unnatural chill swept over him and he shuddered.

"Guys," he said urgently, but Lucas and Joe had already noticed.

"Palmer's coming, we've got to get away," Paul said, trying to push by the other two. But the actor and cameraman were seemingly frozen in place. Then Paul realized they were gazing, eyes wide, at something behind him. He spun around and saw shadows growing, deepening, in the upper corners of the room.

"We should have stayed together, one group," he gabbled. "If Palmer takes over the most vulnerable person here, it will be harder for us to restrain him."

The other two looked at him vacantly, but he saw understanding start to dawn on Joe's face.

"Run!" he shouted, turning to flee. "Just get away, this is where Palmer's strongest!"

A moment later something struck Paul viciously across the shins and sent him sprawling. He landed heavily and tried to roll over. Lucas was standing over him with the camera stand, wielding the metal tripod like a bizarre club. Behind the actor, Joe dropped his own camera and lunged for Lucas, who fought back with startling ferocity.

Paul staggered upright and tried to help Joe restrain Lucas. The old actor fought fiercely, kicking and punching, even biting. But then, as suddenly as the attack had begun, it ended. Lucas became limp, his eyes rolled up into his head, and he slumped to the floor. Paul and Joe caught him before he struck his head on the tiles.

"What the hell was that?" Joe demanded.

"I can still see your breath," Paul pointed out. "Let's drag him out of here. You lift him under the shoulders, I'll get his legs--Joe?"

Joe was backing off down the corridor, eyes wide with panic. Paul spun around and saw a wall of darkness that almost blotted out the room beyond. It was the Palmer entity, stronger than ever before. And, Paul suddenly understood, it had what it wanted. With Lucas unconscious and Joe running away, Palmer could deal with Paul. The chill overwhelmed him, forced him to his knees, paralyzed him.

The darkness ebbed and flowed, tormented faces whirling in the icy cloud, then it condensed to become a squat, vaguely human-like figure. Two dim lights gleamed where eyes might have been. Paul remembered Palmer's old-fashioned, round-rimmed spectacles. For a moment, a fleeting thought tugged at his mind; the question as to why the glint of those glasses, of all things, should have endured.

And then he was simultaneously Paul Mahan and Miles Rugeley Palmer, experiencing the man's life, death, and post-death existence in one chaotic burst of sensory input. It was horrifying, and not just because of the things the man had done. Accessing Palmer's bloated ego revealed how utterly devoid of compassion and integrity the man was.

Even more confusingly, Paul was assailed by fragments of the personalities Palmer had absorbed and enslaved. Tormented souls, pale shadows of Palmer, orbited the doctor's vast, hungry ego. Cries of pain, despair, psychic wails, echoed through Paul's mind. Among the voices, he heard Max Rodria, still crying out for personal deliverance.

Then he had passed through this layer of lost souls and was truly 'inside' Palmer. The doctor's memories cascaded over him and, though he tried to resist, he found himself immersed in Palmer's personality.

Haunted Reader
5.0 out of 5 stars Implacable Horror
Reviewed in the United States on May 27, 2019
Verified Purchase
PALMER ENTITY is the sequel to the horrifying novel ROOKWOOD ASYLUM.
The late Doctor Miles Rugeley Palmer, who along with all the other staff and all the patients of the former Rookwood Asylum, perished in the fire in 1955, has for all these decades collected to him in spirit those patients and staff, together with additional spirits who have died in the building over the years. This massed entity seemingly is confined to the building's premises, but in the remaining copse of trees is awakening the ancient pagan god which once ruled that forest. American Paul Mahan unwillingly agrees to participate in a ghost hunting documentary in the building, fearful that more tragedy will ensue, which of course does occur.

PALMER ENTITY is riveting and terrifying, due to the implacability of the horrors and targeting of bystanders and the virtually innocent. I quite enjoyed this read, as I did the first in the series, and hope it continues.
Read more
4 people found this helpful
Helpful
Report abuse

Key Bae
3.0 out of 5 stars I don't know...
Reviewed in the United States on April 16, 2020
Verified Purchase
I have read this book and the first one, and I am not really happy about the messages he portrays in these stories. I may be too critical about these books so far, but I feel like I need people to get my opinion on this.
Firstly, I really can't stand the idea of a "human" ghost having great and individual power, (aka "ego") to imprison and control "other spirits". To also have the ability to influence others to kill and be killed. It's like the story being told, he was already in a godlike state.
Secondly, a merger with a pagan deity? Then half attempted honorable mentions of life after death. I feel like if you are going to include religious anecdotes, at least have some factual beliefs intertwined in your story. The paganism is strong in these books.
Thirdly, the main character of these series is...i don't know. I don't like him very much. These are just my opinions.

I haven't found a character that I can ultimately "root" for. Can't really relate to any of them. There are maybe two characters that were interesting enough for me, Mike and Percy.

Sorry to be so critical, but I have very mixed feelings about these stories so far.

The books were written well, although some parts felt a little rushed? I can't really put into words how I feel about these books so far. It was ok.
Read more
One person found this helpful
Helpful
Report abuse

Kindle Customer
5.0 out of 5 stars Good, but..
Reviewed in the United States on July 2, 2019
Verified Purchase
I enjoyed this installment about Rookwood and the presence of the doctors spirit. The characters are believable and you feel a sense of the horror that they are enduring. Only slight that I have with the book is there are too many characters that get involved and have a hard time remembering them all. But recommended.
Read more
One person found this helpful
Helpful
Report abuse

Tiffanie C.
3.0 out of 5 stars Ummm.. just ok
Reviewed in the United States on June 19, 2019
Verified Purchase
So this was the 2nd book in the 2 part series. It was just ok. Not much action for a real horror story. I do like the main character, Paul, and his best friend Mike... but only those characters. Just too much vagueness in the entire plot. Maybe there will be another book to bring everything together! All in all not a horrible read... just not what I'm in to.
Read more
Helpful
Report abuse

mslynne
5.0 out of 5 stars No lagging story line in these pages. Be ready to want more and get more
Reviewed in the United States on July 9, 2019
Verified Purchase
We all know asylums to be scary places but this guy is a Josef Mengele relation on steroids. The Palmer Entity is a book you can't put down until things level out for a break. That time never comes. Characters you cheer for and you want to succeed. A history you want to know more about. I'm looking forward to the third installment.
Read more
One person found this helpful
Helpful
Report abuse

Kindle Customer
5.0 out of 5 stars AGAIN??
Reviewed in the United States on March 22, 2021
Verified Purchase
Well, this writer has my number. Got nothing done today because I couldn't put my kindle down! Yep, read it in one sitting. It flows so smoothly, full of twists and turns. If you are a fan of spooky mystery, you have to read this!
Read more
Helpful
Report abuse

dlg
5.0 out of 5 stars Good follow up
Reviewed in the United States on July 4, 2019
Verified Purchase
Good follow up to Rookwood Asylum. Lots of ghost to get rid of. Lots of action.
Well written with well developed characters. The book did finish, but seems as if
another book could follow. Would recommend if you like ghost stories
Read more
Helpful
Report abuse

Lisa Zimmerman
5.0 out of 5 stars Good books
Reviewed in the United States on November 15, 2020
Verified Purchase
It was a bit more complex than the first one. I decided that I can't read it before bed as it gave me seriously weird dreams. I'm still loving the 0 series, they draw me in. I can picture the characters easily.
Read more
Helpful
Report abuse
See all reviews

Kim smith
2.0 out of 5 stars Let down
Reviewed in the United Kingdom on January 14, 2020
Verified Purchase
I found this story jumped about quite a bit and didnt really get going! This book didn’t give me the usual chills that other books have
Read more
Report abuse
See all reviews