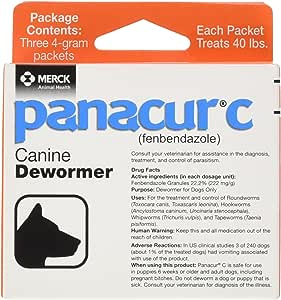 Panacur C (fenbendazole) Canine Dewormer is for the treatment and control of Roundworms, Hookworms, Whipworms and Taenia Tapeworms in Dogs. Panacur C treats all 4 major intestinal parasites in dogs. The daily dose for Panacur C is 50 mg/kg (22.7 mg/lb) of body weight. Consult your veterinarian for assistance in the diagnosis, treatment and control of parasitism. Approximately 1% of dogs had vomiting associated with the use of this product. Panacur C Canine Dewormer has no known interactions.

Mix the daily dose with a small amount of your dog’s usual food. Your dog should eat all of the medicated food. If feeding dry dog food, it may need to be moistened to aid mixing. Repeat the daily dose for 3 days in a row

4.6 out of 5 stars
4.6 out of 5
1,042 customer ratings
How does Amazon calculate star ratings?
Amazon calculates a product’s star ratings based on a machine learned model instead of a raw data average. The model takes into account factors including the age of a rating, whether the ratings are from verified purchasers, and factors that establish reviewer trustworthiness.

MCSE/CCNA/etc
1.0 out of 5 stars Rating ZERO for price QUADRUPLING in the past six months
Reviewed in the United States on July 31, 2019
Verified Purchase
Earlier this year = FEB 2019 this product, by THIS seller "Panacur" = was about $5.00 a box. Now it is $20!!!! GREED GREED GREED there is NO OTHER REASON. This product works as described but it is now ROBBERY. Others have followed suit and I believe this is due to the report by Joe Tippens. Check that out. That explains the GREED. (Joe's story isn't the problem...corporate GREED is the problem.)
Read more
63 people found this helpful
Helpful
Comment Report abuse

Engineer
5.0 out of 5 stars Highly recommended, it worked
Reviewed in the United States on December 6, 2018
Verified Purchase
I am just a soldier who was not paid or influenced in any other way to write this review.
I went out of town a couple months ago, and had my dog stay at a kennel where he got fleas. He had never had fleas before. I took him to the vet and got treatment for the fleas, and once the fleas were gone, I noticed little white worms in his droppings. I looked it up in found that when dogs chew on themselves from fleas they often end up swallowing the fleas, which can give them worms.
I ordered this product and followed the instructions.
Note that the serving size is to be done for 3 days!
After mixing the dosage in with his food on the 3rd day, I no longer saw worms in his poop. It is now about 2 weeks after his last treatment and I just watched him drop off a load in my backyard, and the worms have not returned. I was going to take a picture, but decided that no one really needs to see that....

SakeBomber
5.0 out of 5 stars TREATS GIARDIA
Reviewed in the United States on January 6, 2017
Verified Purchase
So I recently adopted a dog and he ended up having giardia. Poor thing. Problem...I had another dog already and evidently this is very contagious. I took the new dog to the vet, got the meds etc (this same stuff), but my original dog had not been to that vet, and if her stool tested positive I'd have to bring her in for a visit, then also get meds. Well, I was not expecting so many additional expenses so soon after I adopted this little guy, so I got my orig pooches stool tested and just in case I looked around and found this on Amazon, and ordered the amount needed to treat her or him if he needed a second round. This saved me about $100 at a time that I really needed it. Thanks!! If you need this for giardia look around for dosages, since it's an off label treatment, but it totally worked. Both dogs are clear.
Read more
101 people found this helpful
Helpful
Comment Report abuse

KfillyTop Contributor: Camping
5.0 out of 5 stars Saved my dogs life!
Reviewed in the United States on June 2, 2018
Verified Purchase
A dog I adopted developed a serious case of hemorrhagic gastroenteritis within a few days of me bringing her home. My dog was seriously ill. The vet ran a few tests and could not pinpoint the problem. I am guessing she had hookworms as they did not appear when the vet tested her stool sample. The vet was running out of options (multiple vet visits). The vet gave me this product to cover all bases. It seemed to start working as soon as she had her first meal with this powder. My dog was given a five day dose for her case. I gave her a second round of this approximately three weeks later to make sure any worms that may have been in a stage where they would not be effected by this product would get eliminated. My dog has been worn free ever since.

This product is a powder. It is easy to give to a dog. Just add it to the dog's regular food. When using this with dry kibble, mix this powder with the kibble and add a little bit of water. This product comes in three different sized pouches. There is a size to treat 10 pound dogs, 20 pound dogs, and 40 pound dogs. They can be combined to treat dogs of varying weight. For something like a 70 pound dog, one can use one of each packet for a daily dose. Also, one can give a dog the next higher dose if it is in between sizes (i.e. 12 pound dog gets 20 pound dose). This product is typically given for three consecutive days. Each box also contains three packets. Hopefully, that helps one determine how much to buy and what dose to give.
Read more
38 people found this helpful
Helpful
Comment Report abuse

Trinityklm
5.0 out of 5 stars Worked Like a Charm!
Reviewed in the United States on August 14, 2017
Verified Purchase
After the vet prescribed a useless antibiotic for my puppy's giardia, I did some research and found this. I did a six day course and within 24 hours the explosive and uncontrollable diarrhea was much better. By day six, it was completely gone. Just to be safe, I gave her another six day course 21 days later. Amazon's price is about half of what it would cost to buy locally. I'm very thankful that my pup is feeling better!
Read more
30 people found this helpful
Helpful
Comment Report abuse

LalaTop Contributor: Pets
5.0 out of 5 stars Save time and money: works well, happy pups
Reviewed in the United States on August 26, 2018
Verified Purchase
Noticed some wormy things in the doggy doo, thought maybe a fly had landed and was laying eggs in it, but when I continued to notice the buddies, I thought I should try and fix that. Since both my dogs are always with each other then I get both treated with problems like this. Thought about taking them into the vet and getting tested, but that would be over $100 alone and plus however much they overcharge their meds, so thought I'd give this stuff a try.

I have one dog who's 40 lbs, the other is 70 lbs, so I ordered 3 packages. Each day, for 3 days, the little guy got one packet, the big one got 2 packets. I mixed it up with some plain greek yogurt and gave it as a cool refreshing treat since it was oppressively hot and their regular food is administered via food balls and other toys. One of the dogs is very picky and hates anything that might be medicine, it's rather humorous, and then the other one is a garbage disposal (yes, she's overweight one).

Noticed by the end of the treatment things seemed to have cleared up. Now a month later and still healthy looking turds. Amazon had it cheaper than anywhere else local, and got it quickly.

Pups got spoiled with the greek yogurt they figured was a regular meal time treaty, so if consuming the medicine is at all a problem, I suggest mixing it up with some yogurt. Since the powder label says it needs to be stored at a certain temperature range, basically room temperature, I didn't pre-mix the yogurt and powder, just did it right before I was going to give it to them.

Yeah, comparing this to the syrupy syringe stuff the vet gave in the past when one of the pups tested positive for worms, this way is so much cheaper and works much easier. The one little picky dude it was torture to get him to eat that stuff, since he saw it came from a syringe and then knew the smell. Well guess what, big girl there ate the syringe and her brother's. (This is the plastic syringe thing without any needle). Aren't doggies silly sometimes?

So yeah, I live deep in the woods, sometimes venture out to the dog parks in the city and sometimes to the dog beach, and it's probably in those social areas they can pick up things, but glad I found a cost effective and safe solution. It's kinda funny, the whole reason I knew I could DIY deworm was because I was wandering in Tractor Supply and saw that in the horse section or something. By the way, if you have Tractor Supply, it can be interesting to wander in different isles you might be unfamiliar with. I love that store. And of course so do my doggies, and when I had goats, them too.
Read more
19 people found this helpful
Helpful
Comment Report abuse
See all reviews from the United States

Page 1 of 1 Start overPage 1 of 1
This shopping feature will continue to load items when the Enter key is pressed. In order to navigate out of this carousel please use your heading shortcut key to navigate to the next or previous heading.
Back
Next
Pages with related products. See and discover other items: medication for dogs, dog medications, puppy treats for small dogs, small dog feeders, best dog food brands, best dog food for puppies