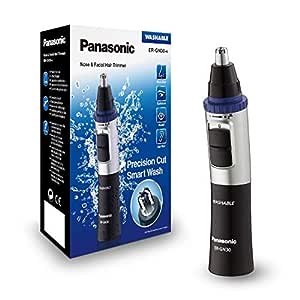 Visit the Panasonic Store
4.3 out of 5 stars 16,232 ratings
Available at a lower price from other sellers that may not offer free Prime shipping.

4.3 out of 5 stars
4.3 out of 5
16,232 global ratings
How are ratings calculated?
To calculate the overall star rating and percentage breakdown by star, we don’t use a simple average. Instead, our system considers things like how recent a review is and if the reviewer bought the item on Amazon. It also analyzes reviews to verify trustworthiness.
Top reviews

john59oldcar
5.0 out of 5 stars Best Trimmer Ever
Reviewed in the United States on November 2, 2013
Verified Purchase
I have used several trimmers over the years and believe this is the one! The angle of the head and speed of the blade makes it more comfortable to use. It doesn't pull the hair it cuts it.
Read more
5 people found this helpful
Helpful
Comment Report abuse

Islander
1.0 out of 5 stars $17 for 5 months
Reviewed in the United States on September 18, 2015
Started out OK. Not the most powerful motor (I've had better). I wonder about the wet/dry setting (all others I've had were wet/dry but did not have to be "set"). But it was an OK clipper. Except that I had to put a new battery in every other time I used it, and then it stopped working altogether in 5 months. Not recommended
Read more
One person found this helpful
Helpful
Comment Report abuse

I have always used a sharp scissors to trim my nose hair. I always had to be very cautious as the scissors were very sharp. Also, it used to take very long time to get the job done. It has to be done carefully hence needed more time. Then I thought of trying to use a nose trimmer. I was always hesitant in trying these trimmers because of the fear that it may cut my skin but still I had decided to go ahead and try it. I then bought a different nose trimmer (not this one), it was straight but worked well. It broke down then I bought this nose trimmer. It is much better than the other one I bought earlier. Its quality is very good, no sharp edges. The top steel blade guard is very smooth and well finished. It never happened that my hair got pulled or my skin got cut or damaged etc. The angle of the trimmer provides a positive point in using the trimmer.

DAJ
4.0 out of 5 stars The trimming itself is excellent, however, removable parts could have been sturdier!!
Reviewed in the United Kingdom on October 6, 2018
Verified Purchase
I'd been persevering with some similar Braun trimmers that were next to useless in comparison to this product, (mostly used for trimming nasal hair). The Brauns used to take forever even just for light growth & they still repeatedly left behind the same nuisance hairs anyway. They were also an eye watering experience during use at times & my nostrils were often tender/inflammed for 2-3 days after use too. (Obviously they were heavy on batteries for little gain as well). A decent replacement was sorely needed in every sense of the meaning!! Reviews seemed to be mixed for these Panasonic trimmers but I've never had any problems with ANYTHING from Panasonic in the past. (If there were any problems in this instance they were fulfilled by Amazon anyway. However, evidently I needn't have worried at all.)

Pros - 1) Very quick & efficient for their intended purpose, SECONDS after firing up these trimmers for the first time I was amazed to find myself well on the way to being done already!! Within a couple of minutes I was tidying up the odd nuisance hair I missed the first time & the job was done. They cleanly cut too rather than painfully yanking hairs out. They're continuing to do an excellent job. ** (In fact, they're so efficient I'd actually recommend caution when trimming nasal hair. Obviously a certain degree of hair is there as a natural filter against various foreign/airborne particles, these trimmers will quickly remove the whole lot if you're not paying attention.) ** 2) Waterproof, can be used wet or dry & they're easily cleaned whilst running too. 3) Small, light & ergonomically shaped, great for trimming from various angles & they fit nicely in the hand. 4) Reasonably priced.

Cons - 1) No travel/storage pouch, not a deal breaker but it would have been useful. 2) Not rechargeable, but this has its obvious pros too. 3) The removable parts remove just a little too easily! The battery cover & top cap both conveniently twist/lock into place. However, the locking mechanisms aren't particularly robust, either part could easily work loose & become lost in a bag, etc., (another reason why a travel pouch would have been handy). 4) Replacement parts available, however, a replacement head seems to cost nearly twice that of the unit itself for example.

Ultimately, when it comes to what's required of them as trimmers they do an excellent job & they do it quickly. A couple of minor niggles which lose them a star, other than that I'm happy with them & they're a huge improvement on my previous Braun trimmers. I would purchase another if I broke the product myself or if it failed out of warranty, or as a gift. (I'll update this review if they do fail prematurely.) Otherwise, I would happily recommend them. 4/5.
Read more
68 people found this helpful
Report abuse

D. Iwanow
4.0 out of 5 stars Mild pain during use
Reviewed in the United Kingdom on December 10, 2017
Verified Purchase
I've used a few of these in the past, often far smaller and cheaper... But the product seems to have decent reviews so I decided to buy it. The size looks something out of place as it's almost the same size as my electronic shaver. The product does a great job of finding and killing any hairs it finds but there was more than a few times it brought a tear to my eye when it found a longer nose hair.
Read more
39 people found this helpful
Report abuse

Aaron
5.0 out of 5 stars Great trim
Reviewed in the United Kingdom on July 20, 2018
Verified Purchase
Really good product for trimming those nose and ear hairs and if you're sticking things up your nose or in your ears, you need to know it's safe and will do the job. The Panasonic ER-GN30-K meets these requirements perfectly. The body of the product is shaped and makes it easy to hold, as well as simplifying insertion into the nose and ear orifices and a slotted cover over the blades allows the hairs to be trimmed while ensuring the cutting section does not come into contact with the nose or ear. I purchased the product to trim nose and ear hairs and for me it works superbly and is excellent value but in addition I understand it also trims eyebrows and facial hair. If you're in the market for a product to carry out any of these tasks, have a look at the ER-GN30-K. I can't recommend it too highly.
Read more
31 people found this helpful
Report abuse
See all reviews

Page 1 of 1 Start overPage 1 of 1
This shopping feature will continue to load items when the Enter key is pressed. In order to navigate out of this carousel please use your heading shortcut key to navigate to the next or previous heading.
Back
Next
Pages with related products. See and discover other items: body hair trimmer for men, panasonic beauty, hair trimmer for men, long beard trimmer, short beard trimmer