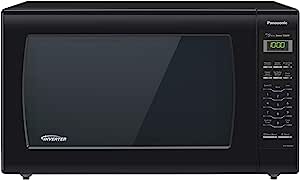 Visit the Panasonic Store
4.6 out of 5 stars 2,914 ratings
Amazon's Choice highlights highly rated, well-priced products available to ship immediately.
Amazon's Choice in Countertop Microwave Ovens by Panasonic
Available at a lower price from other sellers that may not offer free Prime shipping.

Equipped with 1200-Watts of power, a 1.2-cubic-foot capacity and Panasonic Inverter Technology, this microwave oven delivers fast, even cooking and delicious results.

Dedicated Settings for All of Your Favorite Foods

A Steady Stream of Cooking Power for Even Results

Panasonic’s Inverter Technology generates a steady stream of power at all temperature settings. Shorter cooking time along with consistent, evenly prepared food — edges to center — across a wide range of cooking techniques.

Poach, Braise and Steam to Perfection

The smart, compact design of the Panasonic NN-SN651B Inverter power unit devotes less space to electronics and provides far more interior capacity. The 1.2-cubic-foot capacity with 13.4-inch turntable is ideal for accommodating breakfast foods, after-school snacks, dinnertime meals and appetizers when entertaining. The smaller, more efficient energy and control units are also up to eight pounds lighter than conventional microwave components. All of which adds up to more interior space, while taking up less space on a counter.

Ease of Use Features

4.6 out of 5 stars
4.6 out of 5
2,914 global ratings
How are ratings calculated?
To calculate the overall star rating and percentage breakdown by star, we don’t use a simple average. Instead, our system considers things like how recent a review is and if the reviewer bought the item on Amazon. It also analyzes reviews to verify trustworthiness.

nh10ring
1.0 out of 5 stars Steaming
Reviewed in the United States on March 2, 2017
Color: WhiteStyle Name: KeypadDesign: MicrowaveVerified Purchase
UPDATE: I have dropped my rating to one star, and vow to never, ever buy another microwave from Panasonic. After six weeks, I finally have it repaired. Panasonic's customer service is terrible, and gave me one heck of a run around. No customer should have to go through what I did to get mine fixed. Had I known of the hassle beforehand, I would have just thrown the microwave in the dump. I was told at least 3 times that the case would be "escalated" before anything ever happened. Then I was told that once received, it would be repaired in 24-48 hours. It was closer to two weeks. When I opened the box today, I found dirty finger prints and some sort of adhesive on the microwave. They could have had the common courtesy to wipe it down and make it look presentable. I am done with Panasonic. I was forced to use a competitor's brand while mine was in for service. That has been one heck of a microwave, and you can bet I will be looking at that company for my next purchase. The used loaner has already outlasted the Panasonic, and I bet they have better customer service. I see lots of 5 stars by other reviewers. Maybe I got a lemon, but maybe theirs just hasn't broke yet. When it does break, good luck. My advice is do not buy this microwave!!!!!

I owned this microwave for six weeks and it no longer works. I have a H97 error. Since it is still under warranty, I contacted Panasonic who instructed that we take it to the nearest Service Repair Center. Drove an hour to get there, only to find out that it can't be fixed. Was told to call Panasonic back and tell them to ship me a new microwave. I did just that and was told my case will be escalated. 72 hours later, I called back to find out nothing has been done. Really? Was told that a Field Rep has to make the decision on whether or not replace the microwave and case will be given to him for review. CS suggested that I call the Service Repair Center and ask the repairman to call the Panasonic Field Rep. I should not have to do that, and won't. Panasonic needs to get their act together fast before I finish this review. It sits at 3 stars right now, and I will change it to either 1 star or 4 stars depending on Panasonics response time and decision. I am the customer, and I am the one without a microwave at the moment. Let's see how Panasonic treats its customers.
Read more
676 people found this helpful
Helpful
Report abuse

Melissa B
5.0 out of 5 stars An excellent oven, and this "Inverter" technology makes a huge difference in the quality of cooking!
Reviewed in the United States on July 31, 2018
Color: BlackStyle Name: KeypadDesign: MicrowaveVerified Purchase
Note: I'm a former Electronics R&D Technician - ASET.

We just got this two days ago and our old Sharp Carousel microwave oven, which had lasted about 15 years, had died last week, so I set it up the same day.

I love it! It's intuitive to use, just like the old one was. I ordered this particular model because of the numerical key pad, which is like our old one. Some of the newer ones have a dial, where you dial up the time, and that sounded like a hassle. With the numerical keypad, I can just enter 245 and Start, and it will cook at full power for 2 minutes and 45 seconds. Very nice.
https://www.amazon.com/review/create-review/ref=cm_cr_dp_d_wr_but_top?ie=UTF8&channel=glance-detail&asin=B01DEWZWGC
But this new one has something special. That "Inverter" technology. At first, I didn't understand what it meant. Yes, from my background, I knew what inverters are, but it seemed to have nothing to do with what this oven does. So here's what I've learned:

In my old oven - EVEN THOUGH it had a turntable - I would cook something like a frozen dinner, that had maybe a 4" diameter piece of chicken in it. It would come out with the end of the piece rubbery, and the rest cooked ok. Sometimes it did that on rice too. Or sometimes I would cook something and part of the dish would be hot, and part cool.

Long story short: This oven doesn't do that! My frozen dinners have uniform cooking, with no rubbery stuff and everything is a nice even hot meal! It's like a well cooked restaurant meal!

How does it do that?

The old oven technology - even though it has the "carousel", which helped some - would cook with the microwave power either all on, or all off. So if I set it to warm something up for 3 minutes on a power of 5 ( 50% power ), it would cycle the full 100% power on and off, 50% of the time, over that 3 minutes.

But what THIS "Inverter" technology seems to do, is keep the microwave power actually AT 50% for the entire 3 minutes. So it isn't slamming the food with either all or nothing. It's a nice even cooking! I love the difference!

The only thing I might have done differently is not to name it "Inverter", which doesn't make sense to me. I might have called it "Proportional Power" or "Variable Power", or something like that. But what the heck. It's the results that count and I love the results! Very happy with this!

8-29-18 Update: I just heated 2 cups of water to a boil, in a pyrex cup, for making tea. But I forgot about it. I came back 15 minutes later and realized that I have to heat it again. But instead of coming to a boil, it exploded, spraying HALF of it all over the inside of the oven! I don't know how to reach the seller, but if they can contact me, and explain this, I can remove this part and go back to the good review again.
Read more
116 people found this helpful
Helpful
Report abuse

Jim Mercer
3.0 out of 5 stars Best microwave I've ever owned
Reviewed in the United States on January 22, 2017
Color: BlackStyle Name: KeypadDesign: MicrowaveVerified Purchase
I should have bought the 1.6 cubic foot instead of the 2.2, but that's entirely my fault - I misjudged the size I needed. :) Having said that, this unit works incredibly well. I'm particularly satisfied with the sensor reheat and the defrost functions. Nothing gets overcooked, and on the defrost, nothing gets partially cooked, either! Great unit!

My only wish would be that the beeper when finishing or timer expiring would be a little louder. Not that its quiet, but if you have multiple things going on in the kitchen, you can miss it.

Update - one year later. Lowering my rating to 3 stars because after 1 year, the door latch - INSIDE the unit, not on the door itself - broke. The nearest authorized repair center was in Philadelphia, well over 150 miles away, and a local repair guy quoted me $135 to do the repair - and recommended that I simply buy a new one, since the price was now down to $171.

I still love the unit, but do NOT swing the door shut and use momentum to latch it. Bring it to the point of closing, then PRESS firmly. No slamming.

Looked at getting a replacement part and fixing it myself... almost impossible to find these. I'd probably buy it again, but... people in my home need to be far more gentle than with our old microwave, that they could simply slam shut.

Even so, it shouldn't break that easy, in my opinion, hence the drop from 5 stars to three.
Read more
159 people found this helpful
Helpful
Report abuse
See all reviews

Page 1 of 1 Start overPage 1 of 1
Previous page
Next page
Pages with related products. See and discover other items: keep food warm, sharp microwave, best microwave, samsung microwave, panasonic inverter microwave, best rated microwave
Back to top
Get to Know Us
Make Money with Us
Amazon Payment Products
Let Us Help You
EnglishChoose a language for shopping. United StatesChoose a country/region for shopping.
© 1996-2021, Amazon.com, Inc. or its affiliates