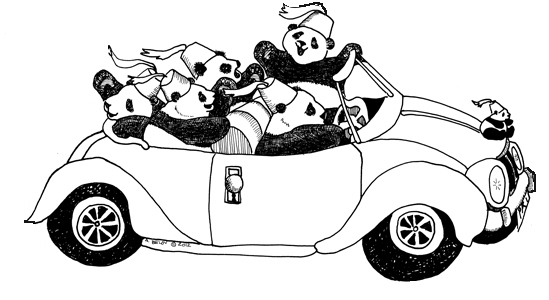 Belov’s love of animals and offbeat sense of humor inspired her to turn her artistic talents to a series of cartoons starring her cat, Mehitabel and Bob, the panda. Brought up on “Winnie the Pooh”, and “The Wind in the Willows”, she has always believed that animals not only can talk, but that they have quite a lot to say for themselves. She lives on Whidbey Island in a house in the woods, surrounded by many animals, unfortunately not pandas. Her main regret in life is that there is no MacArthur Fellowship awarded in the field of panda satire.

B. Boyd
5.0 out of 5 stars You need this coloring book!!
Reviewed in the United States on November 22, 2015
Verified Purchase
Once again, the creativity and genius of author/artist/illustrator Anne Belov has surpassed the mark! Known for her books on panda satire, she has taken the best of her characters and put them into a coloring book, suitable for all ages. As the subtitle says, pandas don't have to be just black and white, and each page provides an opportunity for the one holding the colored pencils or crayons to use their imagination to the extreme! The 115 page book includes blank pages so each masterpiece can be protected. She even provides guidance for the best type of coloring utensils to maximize the experience. I can hardly wait to roll up my sleeves and take out my Crayolas. A great gift for children of any age, including those over 50!
Read more
5 people found this helpful
Helpful
Comment Report abuse

bma410
5.0 out of 5 stars Present
Reviewed in the United States on June 6, 2016
Verified Purchase
Loved the coloring book! Super present for my friends daughter! She deserves to have some extras!
Read more
One person found this helpful
Helpful
Comment Report abuse

J. Alberts
5.0 out of 5 stars Terrific Coloring Book for Panda Lovers
Reviewed in the United States on June 20, 2016
Verified Purchase
This is a terrific coloring book that is really a companion book to go along with a series of books called "The Panda Chronicles". Wonderful book for panda lovers...
Read more
Helpful
Comment Report abuse

Cordelia's Mom
5.0 out of 5 stars Cordelia's Mom Recommends
Reviewed in the United States on January 11, 2016
Verified Purchase
It's not just a coloring book. Anne Belov's panda drawings are exquisite, and there are a lot of them. This is not the kind of book you color and then throw away - you might color it, but then you'll want to keep it to look at the drawings over and over again. It's publicized as an "adult" coloring book, but I think everyone would be thrilled with it. If purchased along with Anne Belov's "Pandamorphosis", it would make an ideal gift for an older child, teenager or adult. Add a stuffed panda, and the recipient will love you forever.
Read more
4 people found this helpful
Helpful
Comment Report abuse

Marlyn
5.0 out of 5 stars Five Stars
Reviewed in the United States on November 20, 2015
Verified Purchase
I love it! Especially the 12 days of Christmas! A great gift for adults and children.
Read more
2 people found this helpful
Helpful
Comment Report abuse

Hazel
5.0 out of 5 stars Who says pandas are all black and white?
Reviewed in the United Kingdom on July 1, 2016
Verified Purchase
Anne Belov is a satirical cartoonist with an obsession for pandas. She has published several books in The Panda Chronicles and has now produced a colouring book to go with the series. Pandas may seem like a peculiar subject for a colouring book since they are, as Belov puts it, “chromatically challenged,” however the world around them is bursting with different tints and shades.

The pandas featured in The Panda Chronicles are not the typical bears you might see in a zoo, or endangered in the wild. Anne Belov’s pandas get up to all sorts of mischief. In this colouring book you can expect to find pandas in all sorts of locations, wearing a variety of odd outfits, taking part in highly suspicious activities. So despite monochromatic fur, there is so much to add colour to.

The Panda Chronicles Colouring Book contains approximately 60 single sided illustrations. Although the paper feels quite thin, the lack of anything on the reverse means that it is safe to use any medium you wish to fill the drawing with colour.

Belov’s drawing approach is not the typical style of the hundreds of colouring books you see in stores – i.e. thick, precise lines and patterns. Belov sticks to her sketchy manner that she has used in all the chronicles thus far. In fact there is reason to believe (although do not quote this) that many of the illustrations are from the original books. While standing out in such a niche market, these particular pages may be more difficult to colour in. Some contain many scribbles rather than clear objects, however that does not detract from the overall fun guaranteed with this book.

Pandas in unconventional settings are a great cause for hilarity and satire. Not only is it funny that these bears are parodying human life, but the things they are up to are highly amusing. One particularly comical scene contains a mother panda telling her child off for being the cause of the LEANING Tower of Pisa, to which the youngster protests, “I didn’t do it! It was leaning when we got here!” The wittiness continues throughout the remainder of the book.

I bought this book hoping it would be suitable for my “pandamaniac” friend, who on occasion tells farcical stories about her (imaginary) friend Miss Panda. Anne Belov’s colouring book is the absolutely perfect present for her. It is almost as if the scenes are written/drawn about Miss Panda herself, despite the artist and my friend having never met… Unless… oh the horror! Maybe Miss Panda IS real!
Read more
Report abuse

sharon
5.0 out of 5 stars Fab
Reviewed in the United Kingdom on January 13, 2016
Verified Purchase
I love The Panda Chronicles and this book was fab ! Lovely pictures , a pleasure to colour
Read more
Report abuse
See all reviews