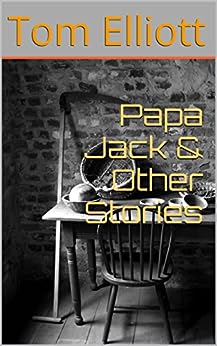 by Tom Elliott (Author) Format: Kindle Edition
See all formats and editions
Sorry, there was a problem loading this page. Try again.
Ever wonder why anyone would keep a head in a bowling bag? Why some actors never seem to age? What a soldier of fortune's employment opportunities might be during a plague? These and many other questions are answered (sort of) in Tom Elliott's recently released collection of horror fiction. The book includes previously published stories as well as new work. Other tales include the title story, told by a young southern woman dealing with an inner demon; an ailing old woman's relationship with her devoted pet; and a story about woman, a snake, and a garden. Warning: A statistically harmless amount of sick and twisted poetry is included.
Read more
Previous page
Next page

One of his first science fiction short stories, "Food Fight," was a 1988 finalist in L. Ron Hubbard's Writers of the Future Contest, and his first novel, THE DWELLING, was a 1989 Bram Stoker Award nominee. his short fiction has appeared in numerous horror publications, including Cemetery Dance, New Blood, Iniquities, Grue, 2 AM, the anthologies October Dreams and Cold Blood, as well as Nightmares on Elm Street: Freddy Kruger's Seven Sweetest Dreams.