You've subscribed to Little Ladies of Talcott House! We will preorder your items within 24 hours of when they become available. When new books are released, we'll charge your default payment method for the lowest price available during the pre-order period.
Update your device or payment method, cancel individual pre-orders or your subscription at
Your Memberships & Subscriptions
There was an error. We were unable to process your subscription due to an error. Please refresh and try again. 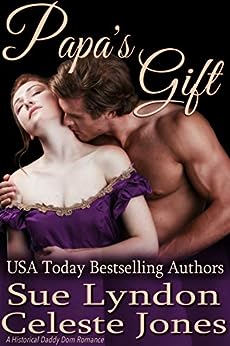 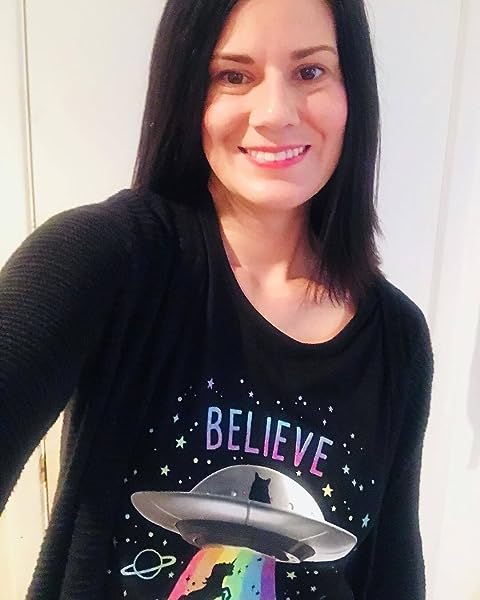 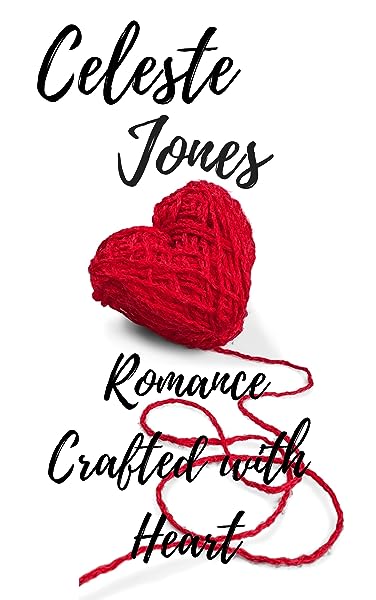 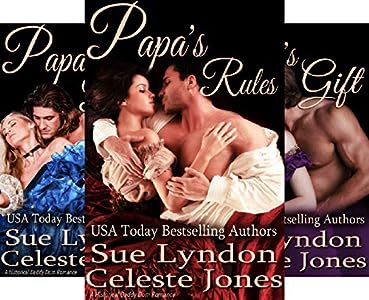 4.0 out of 5 stars
4 out of 5
64 global ratings
How are ratings calculated?
To calculate the overall star rating and percentage breakdown by star, we don’t use a simple average. Instead, our system considers things like how recent a review is and if the reviewer bought the item on Amazon. It also analyzes reviews to verify trustworthiness.
Top reviews

Redrabbitt
TOP 1000 REVIEWER
5.0 out of 5 stars ARE YOU AN ANGEL FALLEN FROM HEAVEN?
Reviewed in the United States on June 19, 2020
Verified Purchase
What a beautiful story co-written by two talented authors. Once I started in this historical DD/lg age-play story, I didn’t stop until I reached the end.

The story has hope, new beginnings, and two people finding each other in a rather unconventional way. While Lord Kensington was betrothed to Hyacinth, another is determined to have her, and then he meets Daisy, and he is immediately taken with her, she will be his, his wife, his little one.

Daisy Smith is a mischievous girl, and that leads to her unorthodox meeting of Lord Kensington when she literally drops into Miss Wickersham’s office. It will be a whirlwind courtship and marriage. While Daisy hadn’t really contemplated marriage and having her own Papa, she and Edward have an instant attraction.

“Love matches were as rare as a flower that blooms in moonlight. For my mother also once told me that true love can strike in the most surprising places and between the most unlikely people.”

“You are the most talkative and delightful little miss I have ever met, as well as the most beautiful and endearingly sweet. Farewell, my little flower. I will see you tomorrow, I promise. She was the beat of his heart, the desire of his loins, his other half, his soul mate. His treasure fallen from heaven.”

The marriage of Edward and Daisy has so many laughing out loud moments with her blunt, impulsive, and unlady-like questions and comments. Together, they are a unique match, but that doesn’t mean they don’t each has secrets, things they hope to remain that way. The day of the wedding, Daisy will disobey Miss Wickersham and attend a fair and speak to a fortune teller. Most of the message is good, but then there is the warning of the past.

“You must contend with your impulsiveness and tendency to overreact and jump to conclusions, as well as your tendency to give in to your insecurities. You will help him find joy that’s been missing from his life for so long, and in return, he will give you the love and security you’ve always dreamed of, as well as the guidance you require.”

Secrets will be revealed, and together they must face their past to move forward with their future. “We each have light and dark in us; there is always hope. And hope can lead to joy.”

“Yes, life had gone from dour and dreary to a veritable carnival of fortune tellers, games of hide and seek, and secrets. And the list did not even include the carnal pleasures. All of it was due to one impish, adorable, endearing and sometimes scandalizing woman—his beloved Daisy.”

Sometimes, a deathbed promise must be broken, and the outcome that is truly feared will not come to light. Secrets lead to lies and more lies, and before you know it, a breach of honesty leads to the fear of rejection. The truth may not be pleasant, but it isn’t the end either. Together, Edward and Daisy are able to heal each other of their painful past. The story has many creative spanking scenes and explicit sex scenes in their marriage.
Read more
4 people found this helpful
Helpful
Report abuse

Jan
5.0 out of 5 stars Another sweet story
Reviewed in the United States on January 22, 2019
Verified Purchase
This was once titles “Papa’s Joy,” so I’m not sure why the name change but it is still the same story. Daisy is our next young lady from Talcott House to find her home. Lord Kensington was originally going to be Hyacinth Papa but things changed and he now is hers. Daisy thought him handsome when she first spied him and is so happy to have him. Edward is so thrilled and delighted with Daisy. She is a chatterbox and so charming. But each person has a past that they are keeping secret.

Honestly, Edwards past is so small. He could have told her from the beginning. But I guess the hurt still lingers. Daisy’s is doing what all the girls of Talcott House have done, try to hide their past the best they can. None of them want to be thought of as wastrels. But we do find out a great deal about her. And boy is she a chatterbox. I think a lot of that is nervous energy. But she is inquisitive. What comes out of her mouth sometimes at the wrong time, UGH. But she is refreshing. She so wants to please everyone. She is like a true little girl lost. It is sort of sad that she entrusts all the most important talks with Lady Miselda.
Read more
One person found this helpful
Helpful
Report abuse

Capopin
5.0 out of 5 stars Plenty of Naughty
Reviewed in the United States on November 23, 2018
Verified Purchase
I have just completed the third book in the Little Ladies of Talcott. I loved all three and I'll start number four tomorrow. Plenty of naughtiness and spanking. The thing I was so taken with was the straight forward and matter of fact way the sex and the discipline were handled. The loving and tender care was so sweet. I look forward to many more books by Sue Landon!
Read more
3 people found this helpful
Helpful
Report abuse

CDaisy
1.0 out of 5 stars Not my cup of tea
Reviewed in the United States on October 30, 2020
Verified Purchase
I’m not sure how or when I acquired this story but I found I wasn’t too keen on it.

In ‘daddy’ stories that I feel okay about reading the young lady is usually treated as an equal except for in the bedroom.

I found this story to be a little too close to incestuous. Using the phrase ‘little girl’ and term ‘papa’ in the ways used here were a little too creepy for me.
Read more
Helpful
Report abuse

lolly
3.0 out of 5 stars Weird
Reviewed in the United States on June 21, 2020
Verified Purchase
This was weird to me. The husband is called papa and treats his wife like a child with discipline. Papa( the husband) tells her what to do, eat , etc. The storyline of how she came to be in the foundling home was good. But the relationship with her husband was confusing and just weird. Plus that fact that she called her dad- Papa. Must not be my type of historical romance. It is also what I would call an erotica .
Read more
Helpful
Report abuse

Jutta Whitworth
5.0 out of 5 stars Paige turner
Reviewed in the United States on May 4, 2020
Verified Purchase
Daisy is a charming, funny, delightful, talkative young lady that is funny and like her friends, gets in more trouble than 10 people could. There is no telling what will pop out of her mouth next. I love a good book that has me laughing one minute, shocked the next and sometimes you want to tell her to run and hide from papa! This book captivates you from beginning to end as do these sweet, innocent girls.

I have read all 4 books and only hope that there will be a 5th book with all 4 girls getting together with their papas.
Read more
Helpful
Report abuse

Lululuvsromance
3.0 out of 5 stars Enjoyable but for the conclusion
Reviewed in the United States on July 17, 2020
Verified Purchase
Love all her Daddy Dom books so much. Just a tad disappointed at the abrupt ending. I feel like there was not enough closure for the H or comeuppance for the evil Hamilton woman who separated her from her father. Also, the H’s secret dragged on for far too long and I feel it took away from the story. Otherwise, I love this kind of naughty Daddy/little trope.
Read more
Helpful
Report abuse

TLG
4.0 out of 5 stars Liked it
Reviewed in the United States on August 19, 2020
Verified Purchase
Secrets from her past haunt Daisy. Little does she know her papa is tormented as well. This steamy tale is definitely worth a read. Editing could be better.
Read more
Helpful
Report abuse
See all reviews

Sue Barter
1.0 out of 5 stars nothing
Reviewed in the United Kingdom on December 26, 2018
Verified Purchase
did not like the story
Read more
Report abuse

Di
5.0 out of 5 stars Lovely read from Talcott House
Reviewed in Canada on January 21, 2021
Verified Purchase
I have read many of the books in this series and totally enjoyed this one. Daisy had a spunky nature and many a time her actions caused me to laugh out loud. Her difficult childhood brings on many of her problems until she can acknowledge who she is. Wonderful read!
Read more
Report abuse
See all reviews