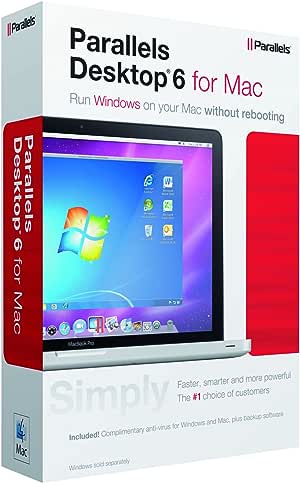 Parallels Desktop 6 for Mac is simply the fastest, smartest and most powerful way to run Windows applications on a Mac, even the most demanding graphical ones, side by side without rebooting. You can even access your Windows programs from your iPad/iPhone with our Parallels Mobile app. No wonder customers have made Parallels number one.

Just because you need to work with PC programs doesn't mean you have to do it on a PC. Parallels, the company that originally gave users the flexibility to work any way they want, introduces Parallels Desktop 6 for Mac, the most talked-about, award-winning way to seamlessly run Windows applications on a Mac.

Seamlessly run Windows applications on a Mac -- without rebooting.

The possibilities are endless when you can drag-and-drop files or copy-and-paste content between Windows and Mac. And it's simple to view and control Windows programs in Expose and Spaces or launch the Windows Start menu or Windows applications right from the Dock

The new Parallels Desktop 6 for Mac delivers an unprecedented 80+ new features and enhancements designed with the Mac user in mind.

Easy to set up, easy to use
Get your Windows up and running on your Mac in no time at all. Move your existing Windows PC to a Mac or install a fresh copy of Windows XP, Windows Vista or Windows 7 in just 3-clicks

The fastest just got faster
Enjoy 3D graphics nearly 40% better and booting Windows is 41% faster than the previous version. From your productivity programs, 3D graphics applications to playing the latest PC games - no compromise in the speed at which your programs perform

Brilliant graphics, perfect sound
Give your Mac a Windows 3D graphics experience that’s unlike anything else! Support for DirectX 9.0c/9Ex Shader Model 3.0 along with 5.1 surround sound create a powerful graphics experience and immersive environment for gaming, music and movies

Run literally thousands of Windows applications like Microsoft Office, Outlook, Access, Project or programs like Quicken, Quick Books, AutoCAD, Revit, Corel Draw and many, many more -- all at near native speed on your Mac, and of course without rebooting.
Never compromise! From PC-only productivity software to graphic intense applications and games, the new Parallels Desktop 6 for Mac has you covered.

Why is Parallels Desktop for Mac the #1 choice if customers worldwide?

Parallels defined the category to run Windows on Mac without rebooting. Parallels Desktop for Mac has always been designed and developed with the Mac user in mind. Parallels invented unique technologies that defined the way you work using two operating systems and its applications side-by-side, without compromising performance, like:

Who is Parallels Desktop 6 for Mac for?

Whether you are a home user, a business professional, a student, a passionate gamer or your company plans to work with Mac or already has Mac. With Parallels Desktop 6 for Mac you simply get the fastest, smartest and most powerful way to run Windows on your Mac without rebooting.

We got Developers and Administrators covered!

With Millions of customers worldwide, the award-winning Parallels Desktop for Mac is the Nr. 1 choice of customers to run Windows on Mac -- without rebooting