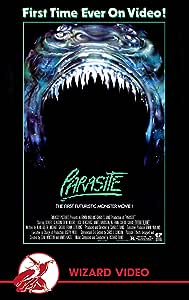 Charles Band's blood-spattered post apocalyptic 1982 monster shocker PARASITE returns to VHS! A major film from both the early 80's 3D horror movie boom and the VHS rental era, Charles Band's bizarre, dsytopian sci-fi monster movie stars Robert Glaudini as rogue scientist Paul Dean who, in a Nuke-ravaged future, invents a parasite that his sinister corporate employers have commissioned to control what's left of the population. With one of the toothy beasts lodged in his guts and another in a high-tech canister, Dean hits the road with laser-gun-toting bad guys on his tail. Along the way he meets a gaggle of punks and thugs who want to harm him and handful of decent folks who want to help him. Meanwhile, the ravenous parasites threaten to burst forth and lock their jaws on everyone, indiscriminately. With early FX by future Oscar winner Stan Winston (JURASSIC PARK, PUMPKINHEAD), a haunting, experimental score by the great Richard Band (MUTANT, LASERBLAST) and atmospheric photography by Mac Ahlberg (PUPPET MASTER), this surreal amalgam of MAD MAX, ALIEN and 60's Spaghetti Westerns also features rocker Cherie Currie (The Runaways) and a young Demi Moore, in her very first screen appearance. Full Moon's ultra-limited edition PARASITE VHS collectors edition is an exact replica of the original Wizard Video "big box" gate-fold release from 1982, lovingly recreated and including the full-length feature film on a high-quality VHS tape. It's the ultimate PARASITE collectible!

Finds a way to worm itself into your heart.

Underrated SciFi-horror flick has everything a B movie trash fan could ask for.