You've subscribed to Recipe for Adventure! We will preorder your items within 24 hours of when they become available. When new books are released, we'll charge your default payment method for the lowest price available during the pre-order period.
Update your device or payment method, cancel individual pre-orders or your subscription at
Your Memberships & Subscriptions
There was an error. We were unable to process your subscription due to an error. Please refresh and try again. 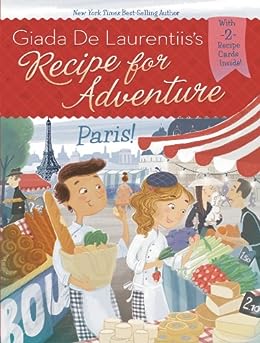 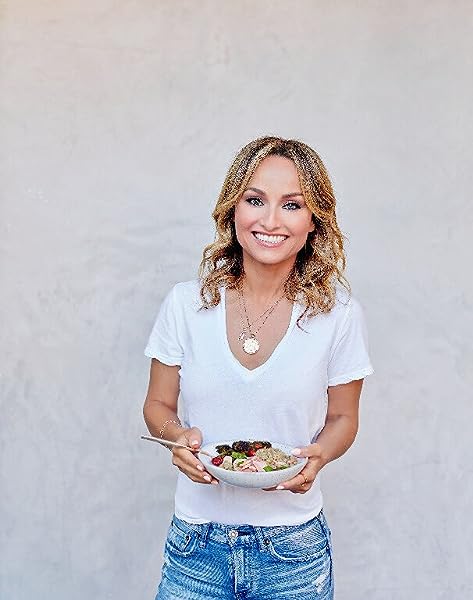 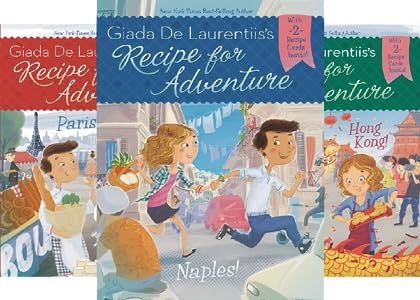 Giada De Laurentiis was born in Rome and grew up in a big Italian family. They spent lots of time together in the kitchen, which is where Giada iscovered her love of cooking! Later, she would hone her skills at Le Cordon Bleu, a very cool cooking school in Paris. Many puff pastries and a graduation later, Giada began working in a fab restaurant called Spago in Los Angeles. Shortly after, she founded her very own catering company. She is now the Emmy Award-winning star of Food Network's Everyday Italian, Giada's Weekend Getaways, Giada in Paradise, and Giada at Home, as well as the author of six cookbooks. She lives with her husband Todd and daughter Jade in a cozy house by the beach in Los Angeles. Giada loves the colors pesto-green and eggplant-purple and Nutella pancakes are her favorite treat to share with Jade. --This text refers to an out of print or unavailable edition of this title.

This book is dedicated to my aunt Raffy, who always inspires me to be adventurous in cooking and in life!

All Alfie could see was the goal. With each step he guided the ball toward the net, where a frightened-looking Jackson stood guard.

Quick as a cheetah, Alfie dodged the other players. From the corner of his eye he saw people shouting and waving their hands, but he tuned it all out and kept his focus steady. He aimed. He kicked. The ball sailed past Jackson, who reacted so slowly that he didn’t even raise his hands to block the ball until it was already bouncing in the corner of the net. Victory was Alfie’s.

Alfie ran screaming across the soccer field while the other team—which was really part of his own team, since this was a practice game—looked away, probably ashamed of their own performance.

“Bertolizzi!” Coach Schrader called from the sidelines. “Get over here!”

Alfie ran toward Coach feeling as if he’d found his place in life. This was the first year he’d played a sport in the after-school program, and it was turning out to be the best decision of his ten-year-old life. In fact, Coach was probably about to make him team captain!

However, Coach Schrader’s face looked a little red, like he’d been the one racing across the field toward total domination.

“What was that?” Coach asked, gesturing toward the field.

“Well, the jerseys.” He tugged on the yellow jersey his side wore for the practice game.

“Alfredo,” said Coach. He rarely called the kids by their first names, and he had never called Alfie by his proper name. “You had shirts all over you. Didn’t you see?”

“The ball, Bertolizzi. Why didn’t you pass the ball? You had two teammates in the clear.”

“Is that what you think?” his coach asked.

Alfie was positive this was a trick question. Of course he knew that winning was the point—they weren’t out here to just kick the ball back and forth—but he got the feeling he couldn’t say that out loud. So he said, “No, sir,” even though he really wanted to say, “Well, yeah. Duh!”

Alfie was 100 percent positive you couldn’t say duh to your coach.

“We have our first game on Saturday,” Coach said, as if Alfie needed reminding. He couldn’t wait! “I need players on the field who are a part of a team. Not some one-man show.”

Alfie suddenly became very aware of his surroundings. The other players were standing on the field not too far from them. Coach wasn’t yelling at Alfie, but Alfie was sure those kids could hear every word. Even worse, some kids—including a few girls from his class—were sitting in the bleachers doing homework and watching practice.

“There’s nothing worse than an obnoxious winner,” Coach said. “Until you can be a respectful team player, I’m going to have to bench you for Saturday’s game.”

“How am I supposed to learn to be a team player when I’m sitting on the bench?” Alfie asked desperately. It didn’t even make sense!

“Hopefully you’ll figure that out,” Coach said. “I expect you to be here suited up at every practice, on time with the rest of your team.”

“Suit up to do nothing? No thanks,” he said.

“I’ll tell you this once,” Coach Schrader said, lowering his voice. “If you’re not at the game on Saturday, supporting your team, then you’re off the team. Is that clear?”

The last thing he wanted was to get kicked off the team. But sitting on the bench the whole game? That was just about the worst thing that could happen.

“Should I order pizza from Presto Pesto for dinner?” Zia Donatella asked that night.

“Zia!” said Emilia, Alfie’s sister. She was older than him by one year, but sometimes she acted like a thirty-year-old. “You hate Presto Pesto.”

“I don’t hate anything, and neither should you,” Zia said. Her long salt-and-pepper hair was pulled back in a braid, and the faded, fitted jeans she wore looked straight out of a Western movie. A spaghetti Western, thought Alfie.

“Well, I don’t want it,” Emilia said. “I’d rather you make a pizza from scratch.”

“Oh, really!” Zia laughed, touching her stone necklace as she did. Zia had all sorts of trinkets from her travels around the world. Those stones just might be from ancient Egypt. “You think I can just whip up a homemade pizza like that?”

“Leave her alone, Emilia,” Alfie said. “We can order in if you want, Zia.”

Alfie only said this because Emilia was getting on his nerves. Everyone was getting on his nerves, except for Zia. As soon as he’d gotten home from school, his mom demanded he clean up the study, where he was sleeping while Zia stayed in his room. Then when his dad got home, he told Alfie he needed to take out the trash. Everyone was on his case today.

“When you say new,” Alfie said, “what exactly do you mean?”

The first time Zia had cooked for them, something utterly impossible had happened. As she made them an Italian treat called zeppole, she told Alfie and Emilia about growing up in Naples, Italy, and how she would always buy a warm, freshly made zeppole any time she had a little pocket money. When Alfie and Emilia bit into the fluffy fried treat, they were transported—literally!—to Naples. They spent an entire day there with a boy named Marco, whose family made the best pizza in all of Naples. They even won the top prize at the city’s annual pizza festival.

So now that Zia had that look in her eyes and said she was going to cook “something new,” Alfie and Emilia became suspicious.

“Let me go pack a bag,” Alfie said. Maybe if they went to Naples again—and he hoped they would—he could be better prepared.

“No. State qui ed aiutami!” Zia said. “Stay and help. The food is always better when you cook together.”

Mom ruffled Alfie’s hair as she walked by him, and he pulled away. “Wow! Someone’s grumpy.”

“I’m not grumpy,” Alfie said, even though he totally was. How could he not be after the way he was treated today?

Mom washed her hands. As she dried them on a towel, she went to the refrigerator. Meanwhile, Zia drizzled olive oil in a pan and turned on the burner.

“Is there ever a good day at school?” Alfie said.

The last thing Alfie needed was to get in trouble, so instead of being mad, he decided to tell everyone what was wrong.

“School was okay,” Alfie said. “Soccer practice was a beating.”

“I thought you said you were going to be the big star on the team, captain and everything,” Emilia said with a smirk.

“I am, and I will be,” he said defiantly. “It’s just that Coach wants to give some of the other players a chance to play, so he’s thinking of sitting me out for Saturday’s game.”

4.4 out of 5 stars
4.4 out of 5
40 global ratings
How are ratings calculated?
To calculate the overall star rating and percentage breakdown by star, we don’t use a simple average. Instead, our system considers things like how recent a review is and if the reviewer bought the item on Amazon. It also analyzes reviews to verify trustworthiness.
Top reviews

KTop Contributor: Cake Decorating
5.0 out of 5 stars Great Book
Reviewed in the United States on January 24, 2014
Verified Purchase
Paris #2 written by Food Net works Giada De Laurentiis is a wonderful book for children as well as Adults I liked it. This would be a hard book for young children to read probably suitable for 8 and up,also in the back of her book includes two recipes that the children can make with an adult supervision.
Read more
2 people found this helpful
Helpful
Report abuse

Ryan
5.0 out of 5 stars Super, super book for our younger friends!
Reviewed in the United States on December 19, 2013
Verified Purchase
Very well written and understandable for the younger, soon-to-be chefs of the future! Great info and very entertaining. Definately loves it!The book gives insiration to younger individuals and helps foster interest in learning to cook, as well as information about places around the world. Giada does it, again!
Read more
3 people found this helpful
Helpful
Report abuse

CC
4.0 out of 5 stars Great Book for my Grandaughter
Reviewed in the United States on October 8, 2013
Verified Purchase
These are great books for the kids to read. They learn about other places and food. it is like they are there.
Read more
6 people found this helpful
Helpful
Report abuse

Johnny W Bass
5.0 out of 5 stars Love her
Reviewed in the United States on October 31, 2013
Verified Purchase
We bought this one and the Naples book as well and my wife has read these to our kids several times, they love them! We're waiting for the next to be released!
Read more
2 people found this helpful
Helpful
Report abuse

Jeanne Hopkins
4.0 out of 5 stars Purchased for future enjoyment with grandchildren
Reviewed in the United States on April 2, 2015
Verified Purchase
Purchased for future enjoyment with grandchildren. I am a Giada DeLaurentiis fan, so was enticed by this series, for children. In the meantime, we will try the Hot Chocolate recipe.
Read more
Helpful
Report abuse
See all reviews