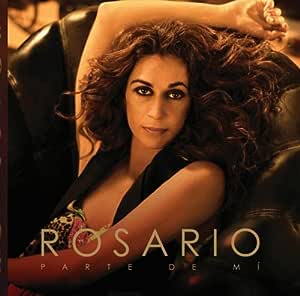 After a 25 year career, Rosario felt it was time to do this album with songs so close to her heart. She feels this album is a gift not only to her fans, but also herself.

More on Rosario: Rosario, the youngest daughter of Lola Flores and Antonio Gonzalez, the Pescaílla, was born on November 4, 1963. Her life from the beginning was predestined to live for music, given the origins and influence of her family. Her first big success came with the album "De Ley" 1992, where she performed some of her brother Antonio's best songs, like "Mi Gato" and "sabor sabor." In 1994, Rosario returned with "Siento", with songs as happy and danceable as "Ese Beso" and "Estoy aqui." Two years later, after the death of her mother and her brother, she published "Mucho por vivir" an album full of enthusiasm and hope, which included the tender song "que bonito." With the release of her fourth album in 1999, "Jugar a la locura" Rosario opted for more rock and electrical feel. It was with "Muchas Flores" (2001) when Rosario received International validation after winning the Latin Grammy for Best Female Pop Album. In this album Rosario combined ballads, bossa, rumba catalana, Caribbean beats and pop, making hits such as "Al son del tambor" and "La casa en el aire". Her second Grammy came with "De mil colores" in 2003. In "Contigo me voy", Rosario deployed a range of styles in which she gave all of her inspiration, voice and strength. Now, after more than 25 years, Rosario traveled to the confines of her memory to offer us a piece of her musical universe in "Parte de Mi," An album that is the soundtrack of her life and pays tribute to the songs which have filled her soul.

4.7 out of 5 stars
4.7 out of 5
27 global ratings
How are ratings calculated?
To calculate the overall star rating and percentage breakdown by star, we don’t use a simple average. Instead, our system considers things like how recent a review is and if the reviewer bought the item on Amazon. It also analyzes reviews to verify trustworthiness.
Top reviews

DGL
5.0 out of 5 stars Love this CD
Reviewed in the United States on September 17, 2009
Verified Purchase
These are just new versions of old songs, but Rosario is so talented that the result is a beautiful music selection. Even my husband liked it and he is not a fan of this type of music.
Read more
2 people found this helpful
Helpful
Comment Report abuse

Blanca Quinones
5.0 out of 5 stars Five Stars
Reviewed in the United States on September 8, 2015
Verified Purchase
Love hearing of other latin singers. Her voice is such so clear and powerful.
Read more
Helpful
Comment Report abuse

rafael rivera
5.0 out of 5 stars Ole por Rosario
Reviewed in the United States on December 21, 2011
Verified Purchase
Love her voice, love her style...a more subtle cd with great songs of hers and other
famouse artists like Juan Luis Guerra 440, sung her style...most are romantic and a bit melancholic...but nevertheless a treat...with excellent miscicians...no wonder this production was a Grammy nomenee !!! liked it so much I reordered 3 more for best friends...Ole por Rosario