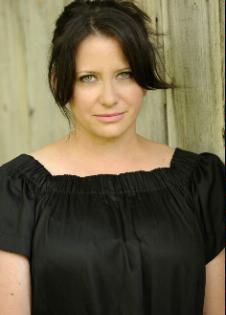 Chosen by USAToday.com as a HOT NEW ROMANCE!, --

“Intriguing premise, fiery dialogue, and digs about celebrity-obsessed culture that moves at the speed of Twitter…”, Publishers Weekly, on Precious Blood

"...Hurley brings her deadpan wit and blackest humor to the first tale in this trilogy about spirituality, sacrifice and supernatural romance.", MTV Hollywood Crush, on Precious Blood

Tonya Hurley is the author of the New York Times bestselling series ghostgirl and the Blessed trilogy. She has worked in nearly every aspect of teen entertainment: creating, writing, and producing two hit TV series; writing and directing several acclaimed independent films; and developing a groundbreaking collection of video games. Tonya lives with her husband and daughter in Brooklyn, New York.
Start reading on your Kindle in under a minute.

4.2 out of 5 stars
4.2 out of 5
8 customer ratings
How does Amazon calculate star ratings?
Amazon calculates a product’s star ratings based on a machine learned model instead of a raw data average. The model takes into account factors including the age of a rating, whether the ratings are from verified purchasers, and factors that establish reviewer trustworthiness.
Top reviews

Heather C.
3.0 out of 5 stars Okay, but Not as Good as the First Book
Reviewed in the United States on January 22, 2014
Verified Purchase
I loved the first book in this series! Precious Blood was a fantastic read. However, Passionaries was a bit mediocre in my opinion.

I like the title, and I believe it is quite fitting for the book. A minor character in the book defines what passionaries are. They are some kind of books related to the Catholic religion. I don't know if that's fictitious or not (I did try searching for it and found nothing).

The cover is very gorgeous as are all of the covers of Tonya Hurley's books. The cover fits the book especially with the guitars and the sword.

The world building was a bit hit and miss. There were times when it seemed like something like this could happen. I mean, who says we can't have modern day saints? However, there were also times when it seemed a bit too unreal such as when people were getting murdered. For example, in one scene, the girls get attacked so they end up killing their attackers. They don't get arrested because there's no evidence. Surely they would've caught them on CCTV or someone would've seen the girls with blood all over them. Plus, there'd be so much forensic evidence. I also felt that sometimes there was sometimes some fight scenes just for the sake of having a fight scene.

The pacing started off slow but eventually find a decent pace. The pacing isn't as good as the first book in the series, but it still held my attention.

As for the plot, I don't really know what's going on. At least in the first book, it was the girls finding out they were saints. However, after reading this book, I don't know what's going on! I realize the girls are saints and there are some people that don't want the world to know that, but what I don't know is the why. Why do these people not want the world to know these girls are saints? I felt that the answer is just not very clear. Passionaries did have a plot twist that I never saw coming. There's also a big cliff hanger at the end of the story as to make way for the third book in the series.

The characters were all fabulously written. The girls are stronger in this book, and their saintly personalities show through. Saying that, Cecelia is more hardcore in this book then in the first one. At least I thought so. Dr. Frey is still very cunning as ever in Passionaries. One thing that did irk me was that Hurley brought in the character of Finn. To me, Finn is a totally pointless character. I really didn't see the relevance in bringing him into the story.

There were times when the dialogue did seem a bit awkward although this was mostly in the beginning of the book. I felt that the meeting between Dr. Frey and some of his associates at the beginning of the book had painful dialogue. It just didn't seem to flow naturally. Luckily, the problem is quickly solved. There is some swearing in Passionaries as well as graphic violence.

All in all, Passionaries fell short of my expectations. It was a little bit too confusing, and the world building just didn't seem all that realistic. I do want to read the next book in the series because I've invested so much time in this series. However, the expected publication is some time in 2015, so I may give it a miss since I tend to forget things that happened in books after so long.

I'd recommend this book to those aged 17+ who want to know more about Lucy, Cecelia, and Agnes.

(This review can also be found on my blog).

Jan Hawkins
5.0 out of 5 stars Waiting for the next book in the trilogy!!
Reviewed in the United States on March 16, 2014
Verified Purchase
I chose this rating because the storyline kept me interested from beginning to end. I have read and enjoyed all of Tonya Hurley's books
Read more
Helpful
Comment Report abuse

Clementina R. Morton
5.0 out of 5 stars Faith vs. Evil:Which will Prevail?
Reviewed in the United States on January 27, 2014
Following the Massacre at the Cathedral of Perpetual Help and Sebastian's death, Lucy, Agnes and Cecelia return to their lives as Sebastian had suggested. Now, however, they are Superstars and followed by throngs; some asking for their prayers and intervention; others denigrating their Faith.

The girls discover that Sebastian's heart is missing, and unbeknownst to them, Dr. Frey has it. Their pursuit is to find it. Dr. Frey and the World's Power Brokers want the girls and their message of Faith destroyed. Cardinal DeCarlo, Advisor to the Pope, visits Dr. Frey. The girls must be quickly lured to their destruction. The Pope, unaware of DeCarlo's duplicity, tells him that he is sending an investigator to test the girls' authenticity.

When one of the girls goes missing, the other two follow Dr. Frey and are able to locate her. They arrive just in time to find the Cardinal preparing to torture her. Not allowing the Cardinal the satisfaction of destroying her, our Saint, in a vivid and breathtaking way, and according to her Destiny, destroys herself. The Investigator arrives; DeCarlo is taken away, and the two saints, while mourning their friend, know they too, are moving towards their own destinies. Dr. Frey has once again escaped. He has been busy, intervening in the lives of Bill and Jesse. Will Dr. Frey escape in the final book of The Blessed Trilogy or will the World be saved from Evil? We look eagerly forward to finding out.

The Author's description of these very real time girls aka saints, and their thoughts about their true identities, and the exciting yet frightening ride to an inevitable end - or so it seems, continues to carry us along.
Read more
Helpful
Comment Report abuse

Cristina Isabel
5.0 out of 5 stars Passionaries
Reviewed in the United States on July 2, 2016
The three girls are still lost about what they're supposed to do. And now, with Sebastian gone, they have no one to turn to but each other. It seems that no matter what happens things are going from bad to worse. Not knowing who to trust and the dangers that face them if they continue to venture deeper into what Sebastian meant about being saints, their true purpose in this life. Time is of the essence. Passionaries truly shines as it delivers a new meaning on what we really believe our true worth is on this earth. It certainly outdoes Precious Blood as it brings us one step closer to the nail biting ending.
Read more
Helpful
Comment Report abuse

Books and Iced Coffee Book Blog
5.0 out of 5 stars Just as good as the first book!
Reviewed in the United States on January 7, 2014
I found this book just as exciting as the first installment to the series. I really enjoyed the development of the plot as well as the twists and revelations within the plot. The feel of the book matches the plot really well, just like the first book. I think that the author did such an amazing job with the setting and emotional description that pulls the audience alongside the characters throughout the story. I haven’t read a lot of “dark”- ish themed books (althoughI’m trying to get myself into, hence, this review) only due to the lack of supply of the genre at the local bookstore, and after reading this, I would really love to read more novels with the similar genre.

Anyways, I love how the characters really developed in this installment. I enjoyed reading about how they cope as they come to terms with their fate/destiny. They all seem relateable in a way. Although I was very sad that Sebastian was gone :(.

Overall, I thought that this was such an exciting book! If I had a lot of free time on my hands, I think I would’ve devoured this book in a day or two :) Ms. Tonya Hurley did such a good job with this book. I felt that it definitely lived up to the first installment of the book. Such an amazing read!