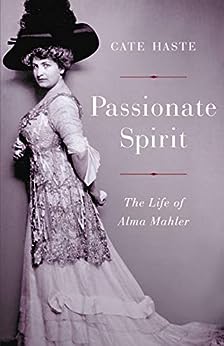 "A well-rounded portrait of an imperious woman and her eventful life."―Kirkus Reviews --This text refers to an alternate kindle_edition edition.

Cate Haste is a biographer, historian, and filmmaker. She is the author of a number of books, including Nazi Women and the award-winning biography Sheila Fell: A Passion for Paint. Haste lives in London. --This text refers to an alternate kindle_edition edition.

Amazon Pianist
2.0 out of 5 stars Newly published biography of Alma Mahler
Reviewed in the United States on May 4, 2020
Verified Purchase
Although touted as a new, ground-breaking biography of Alma Mahler, claiming to shed new light on her musical ability, this book offers nothing more than a rehash of other literary portraits of her. The writing is pedestrian, and often needlessly racy. Spelling out specific sexual references is not the same as including information culled from research: it's gossip. Nor does turning her into a musical martyr serve her well. A definitive biography of Alma Mahler has yet to be written. Meanwhile, there are a few slender volumes as well as excellently researched and detailed inclusions in various biographies of Gustav Mahler.
Read more
3 people found this helpful
Helpful
Report abuse

James Arbuckle
4.0 out of 5 stars Alma Mahler - The times they were a-changing!
Reviewed in the United States on February 22, 2020
Verified Purchase
Alma was a bellwether for her epoch: seeming to follow her illustrious and famous husbands and lovers, but really at the forefront of great changes for her times, for her men who were musicians, an architect and a novelist and - not least - for women every where. She lived in and through highly interesting times in Europe and in the world at large. Her life story will fascinate and inform students of the birth of the modern age in the first half of the 20th Century. A book I would give to my daughter.
Read more
3 people found this helpful
Helpful
Report abuse

D. Kovacs
5.0 out of 5 stars The best biography of this ultimate grande dame of the arts
Reviewed in the United States on September 17, 2019
Verified Purchase
I’ve been waiting for a decent biography of Alma. The books from the 80s and 90s on Alma range from good to boring. Alma may have been a lot of things, but she was never boring, so how could you write a boring book about her?? I appreciated the Liszt biography by Hilmes, but I didn’t want to crack his book on Alma entitled Malevolent Muse. Again, Alma may have been a lot of things — but to call her malevolent? That’s a bit harsh, and I see no evidence for it. As one reviewer said, she must have had something...and the author of this new biography delves into exactly that, without denying any of the darker side of Alma. She was a life-giver yet somehow demanded all the oxygen in the room! How do you do that?? This book captures it well.
Read more
One person found this helpful
Helpful
Report abuse

Renee DoGood
5.0 out of 5 stars What a Life
Reviewed in the United States on August 5, 2020
Verified Purchase
Fascinating book about a woman in the middle of a musical and artistic maelstrom in fin-de-siecle Vienna. If you are interested in this period of intense creativity in Austria, you will enjoy this book. It is well documented, much of it from Alma's extant diaries. However, one has to wonder just how accurate those diaries were. Her narcissism was on full display throughout the entirety of her life.
Read more
One person found this helpful
Helpful
Report abuse

bashh
4.0 out of 5 stars Alma, Story of an Narcissistic It Girl.
Reviewed in the United States on November 16, 2019
Verified Purchase
Good book about a horrible woman. The author states right at the beginning that she likes Alma. So she seems to overlook or excuse a lot of Alma’s unpleasant behavior. Seems to be well researched and sets Alma into the period.
Read more
2 people found this helpful
Helpful
Report abuse

Constance Holden
2.0 out of 5 stars Uninteresting
Reviewed in the United States on November 12, 2019
Verified Purchase
Long, tedious and boring. Do plan to read the autobiography
Read more
Helpful
Report abuse

David H.
3.0 out of 5 stars Disappointing writing style
Reviewed in the United States on December 7, 2019
Verified Purchase
Mostly quotes from letters and diaries, almost reads like cut and paste with little flow to the writing.
Read more
Helpful
Report abuse

Paul Gelman
4.0 out of 5 stars A passionate and immoral woman
Reviewed in the United States on September 11, 2019
This is a very readable book on one of the most famous and-one must say-and most infamous women in the history of music. A woman who loved many men and was loved by many more men, she was jealous, creative, and many times irrational. She was thrice married, to Mahler, Gropius and Werfel.
When WW2 started, she had to flee from her homeland, Austria, to France and then to the USA. She was a woman who had many personal tragedies (she lost three of her four children at an early age each) and died at the ripe age of 86 in New York after having had many strokes .
The author used many new sources, hitherto unknown and gives many details about the cultural, political and social times that were in the backgroud of her life during the 20th century. So far, so good.
However, this book has some points which merit to be called controversial. In my view, the authors' insistence that Alma's legacy was in the many compositions she left is dubious. One can hardly talk about her as being a composer.
Second, there are some errors, for example a photo following page 320 where Otto Klemperer is called a composer. This was never so. There are some more inaccuracies .With all this said, one can enjoy this book , if you are interested in a light read.

Jingwei Yu
5.0 out of 5 stars German-Austrian Art and Political History in High Drama
Reviewed in the United Kingdom on December 27, 2019
Verified Purchase
To give a glimpse on the name-dropping nature embedded in this woman's life:

"For Alma's seventieth birthday on 31 August 1949, Gustave and Gusti Arlt asked her friends to contribute to a leather-bound book of appreciations. Seventy-seven people - companions from every stage of her life - responded, including Kurt von Schuschnigg from his exile in St Louis, the writers Carl Zuckmayer, Freanz Theodor Csokor, Lion Feuchtwanger, Heinrich Mann, Fritz von Unruh; composers Benjamin Britten, Ernst Krenek, Darius Milhaud, Igor Stravinsky; conductors Erich Kleiber, Eugene Ormandy, Leopold Stokowski and Bruno Walter. Willy Hass, Werfel's boyhood friend, sent a tribute to this 'timeless woman' with her keen mind', 'unfailing helpfulness', and her charm, who 'beautified the lives of everyone who has had the honour of loving and honouring you'. Walter Gropius wrote from Cambridge, England, 'Past and present join together! Heartfelt thoughts!'

"Schoenberg was not present but he composed a birthday canon based on the text: 'The centre of gravity in your own solar system circled by glowing satellites, this is how your life appears to the admirer.' ... Thomas Mann was unusually effusive as he praised 'the joyful stimulation that exudes from your personality, a human nature in female form, a great woman..." (p.379 of the book)

Alma's life really feels like a soap opera cast against one of the most tragic episodes of modern history. To read her life is to read a brief timeline of the German-Austrian art and political events from the turn of the century until after the war. But this biography itself is much more than name-dropping. The portrait of a struggling woman before the age of femininity is through and through. The opinions taken from her immediate family and friends circle are well balanced. Direct reference to her own often disputable account is careful and always cross referenced with other sources whenever possible. Overall it's a very satisfying read.

The only bone in the chicken that I can pick is that the central thesis - "music was the voice through which she could express her passionate spirit. Her own music is her lasting, and living, legacy" - was not at all fully explored. Merely one page at the very end of the book to summarise Alma's life-long work in music. There is no systematic analysis on her style and influence. But then Cate Haste is not a specialist on musical history, nor is Alma Mahler's feet only deep in music. Alma was controversy itself, and she is best served that way. A definitive statement doesn't do justice to her. So maybe the book is better off without the last page that gives the feeling of being snatched up at breakfast on the day it was sent to print, as Puccini often did.
Read more
2 people found this helpful
Report abuse

Ellen
4.0 out of 5 stars What a life!
Reviewed in the United Kingdom on September 6, 2020
Verified Purchase
I knew nothing about Alma Mahler before reading this and not sure if I liked her but this is still a wonderful biography. And you get to understand what kept Freud so busy in Vienna!
Read more
Report abuse
See all reviews