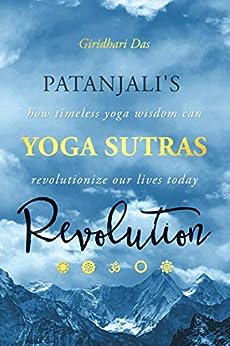 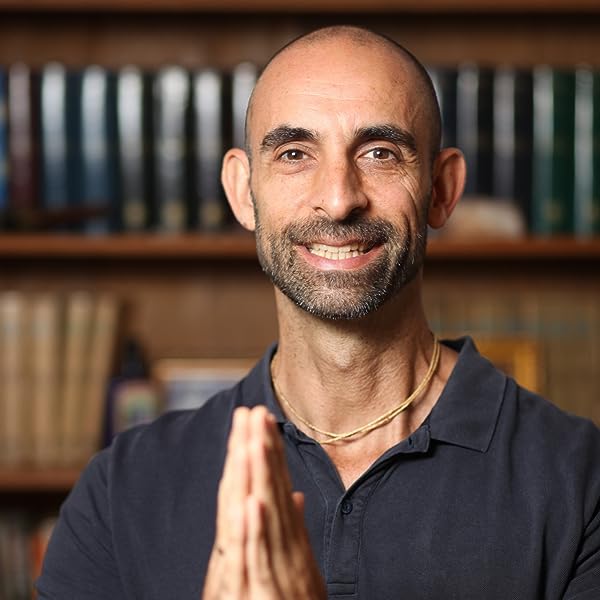 by Giridhari Das (Author) Format: Kindle Edition
See all formats and editions
Sorry, there was a problem loading this page. Try again.

Patanjali’s Yoga Sutras is one of the most important books about meditation, self-improvement, and the practice of yoga. This 2000-year old text describes how the mind works, how we can obtain peace, and how we can direct our thoughts, with the goal of achieving full freedom from all suffering.

The Yoga Sutras can be hard to decipher, let alone put into practice, but in this version, a practical presentation of the text, you will find a useful, easy-to-understand translation and commentary.

The world needs a revolution of consciousness. We must change the way we go about life and how we deal with one another. In this book, you’ll see how yoga can provide us with a blueprint for this revolution.

The author, Giridhari Das, is a Brazilian yoga guru who created The 3T Path, a down-to-earth presentation and application of yoga in the context of modern life that is changing the lives of thousands of people.

“The Yoga Sutras by Giridhari Das is perhaps the most entertaining and easy to read version of this classic text, among the dozens I’ve seen. Even the book’s layout and illustrations make the journey painless, like watching some really good movies on a long flight. The profound core message of the Yoga Sutras is indeed timeless, as relevant and needed today as ever. And Giridhari Das has shown, to quote Mary Poppins, that a little bit of sugar makes the medicine go down.” - – Hridayananda Das Goswami Acharyadeva, PhD in Sanskrit and Indian Studies, Harvard University

“In Revolution, his relatable translation of and commentary on Patanjali’s Yoga Sutra, Giridhari Das shares with us a lifetime of research and experience in ancient yoga traditions and guides us through the sutras one by one, helping us understand them from our contemporary perspective and apply their wisdom to our day-to-day lives.” - –Dr. Carl Herzig, Professor of English, St. Ambrose University

“Thoroughly enjoyed it and didn't want it to end. Great read and inspiring realizations with lots of practical application to improve the inner quality of your life.” – Visnu-maya DD

Giridhari Das, or Giri for short, is a Brazilian self-help and spiritual teacher, author, and speaker. He has been practicing bhakti-yoga, the yoga of devotion, and working with self-development for over 20 years. His mission is to present the 3T Path, a transformative process to meet and transcend the challenges of life in the 21st Century, based on the knowledge of yoga found in both ancient Sanskrit texts and the latest research in the fields of positive psychology and neuroscience. The 3T Path can be easily understood and applied as a means of self-improvement and self-realization in the world today.

Giri was born in Prague in 1969 as Gustavo Dauster, the son of a Brazilian diplomat. A few years later he and his family returned to Brazil, where he stayed until he was 9 years old. Then he moved to London where he lived for the next 8 years and studied at the American High School. Later he spent a year in the USA at Brown University and, after permanently moving back to Brazil, completed his degree in economics.

His career was just beginning when he was introduced to the bhakti path through a business contact. He spoke to him about Krishna consciousness, and his wife gave him a copy of the Bhagavad-gita As It Is. He was impressed with the knowledge found there and soon become seriously committed to the path, the daily practices and the studies.

In 1993, he met his spiritual master, Hridayananda Das Goswami Acharyadeva, and after developing a close relationship with him as his disciple, he took formal initiation in 1998, receiving from him the spiritual name, Giridhari Das.

For many years, he participated actively in ISKCON in various positions of administration and leadership in Brazil. For 10 years he was in charge of the Brazilian branch of the BBT, the publishing house of the Hare Krishna movement, and after that he served for several years as president of the governing body of ISKCON Brazil.

Today he owns and runs a Yoga Resort called Pandavas Paradise in Chapada dos Veadeiros in the highland plateaus of central Brazil. He lives there with his wife, Charana Renu Dasi (Rhiannon Dauster), and his two young sons, Bryn Govardhana and Macsen Krishna. He met Charana in Wales in 2007 while touring with his spiritual master. She has also been practicing and teaching bhakti-yoga since 1999.

He enjoys teaching students and guests at their yoga resort and at other spiritual centers in Brazil and around the world, and for many years he has been teaching and guiding people through email, but more recently he began to feel the need to reach out to a larger audience and in 2014 started a YouTube channel for that purpose. He currently records videos for two YouTube channels in Portuguese and one in English. He has also published four books on yoga and self-realization in Portuguese and The 3T Path in English.

The focus of his teaching is the 3T Path, a systematic, modern presentation of the ancient path of self-improvement and self-realization in yoga and Krishna consciousness. He developed the 3T Path after many years of dedicated study and practice, to share his experience and realizations in bhakti, and to address the needs and challenges of people today.

Cynthia G.
5.0 out of 5 stars An Indispensable Guide to Understanding the Yoga Sutras
Reviewed in the United States 🇺🇸 on March 20, 2019
Verified Purchase
Very helpful introduction to the yoga sutras. Fairly easy to comprehend for such a complicated discourse. Reading this book, I really appreciated the path that is laid out for spiritual growth, as well as the depiction of a yogic life along with the challenges and solutions along the way. All of the Sanskrit terms are defined throughout in a comprehendable manner.
Read more
2 people found this helpful
Helpful
Report abuse

Radha Krishna
5.0 out of 5 stars Quick and easy to ready/insightful
Reviewed in the United States 🇺🇸 on March 26, 2019
Easy to read and understand. Valuable ancient wisdom that still can be applied to modern life. Not a big book, worth checking out.
Read more
3 people found this helpful
Helpful
Report abuse

Bill Reed
2.0 out of 5 stars Go elsewhere for Patanjali
Reviewed in the United States 🇺🇸 on November 5, 2019
I bought this to replace a hard copy of Patanjali, thinking a "modern" commentary would be helpful. Instead he is using this as a marketing piece for his "3T" lifestyle practice, which he mentions on nearly every page. I'm sure it will be helpful to some, but if you want lifestyle get his 3T books directly. If you want Patanjali, stick with Satchidananda or Vivekananda's commentaries.
Read more
3 people found this helpful
Helpful
Report abuse
See all reviews

Renata
5.0 out of 5 stars Everyone who is looking for yoga path should read this book!
Reviewed in the United Kingdom 🇬🇧 on December 12, 2018
Verified Purchase
This book is marvellous, it has showing easier way to learn yoga path from sacred texts and well being contemporary issues. I'm glad to found it!
Read more
Report abuse
See all reviews
Report an issue
Does this item contain inappropriate content?
Report
Do you believe that this item violates a copyright?
Report
Does this item contain quality or formatting issues?
Report