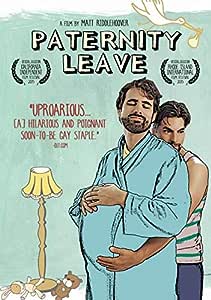 Greg, a 30-year-old web designer, is settled into a stable and healthy relationship with Ken, a criminal defense attorney. Caught in a moment of passion on the eve of their four year anniversary, Greg soon begins feeling nauseated, fatigued, moody and ? most unfortunately ? fat. At his wit's end and his boyfriend's insistence, he sees a doctor who's stumped and refers the couple to a specialist. To everyone's amazement, Greg is pregnant. Shock, stress, and fear settle in, and Greg's relationship gets put to the ultimate test. Paternity Leave poses a modern answer to the age old question: "Are we ready to be parents?"

4.0 out of 5 stars
4 out of 5
148 customer ratings
How does Amazon calculate star ratings?
Amazon calculates a product’s star ratings based on a machine learned model instead of a raw data average. The model takes into account factors including the age of a rating, whether the ratings are from verified purchasers, and factors that establish reviewer trustworthiness.
Top Reviews

Susie Umphers
5.0 out of 5 stars A movie with humor, romance and some truths about maturity
Reviewed in the United States on January 29, 2020
Verified Purchase
The general premise is that for some reason, men around the world are suddenly able to get pregnant and give birth. Our focus is on Greg (who will eventually become pregnant) and several of his relationships. The first, with Alex I found rather painful. Alex is clearly as sweet guy and Greg and his doctor friends have an incredibly condescending conversation about him because he does not have the education Greg does. Greg goes along with it and takes that attitude home to Alex, who leaves. At this point I thought Greg was a grade A number one jerk, as the script intended. His friends hook him up with lawyer Ken, they get involved and Greg gets pregnant. Ken is overjoyed when he thinks they are going to be famous for being the first couple with a male birth. When other men start giving birth before Greg, we see Ken show himself to be grade A number one jerk number two in the film. This marks the turning point where we get some really serious scenes and some really funny ones. The first superb serious scene occurs when Ken is whining the changes his life is going to undergo like needed a car suitable for a child, etc. etc. Finally Greg has had enough and tells him that he cannot "be his rock" all the time now that he is undergoing all the pregnancy changes and that Ken needs to step up and provide some reciprocal support too. This breaks the relationship and Ken leaves. We then see Greg hunting for a doula and that is hysterical. He finally finds the ideal one in Thomas who may be my favorite character is this movie. He is charming, funny, intelligent an all around great guy (at this point I was kind of hoping Ken was gone for good). However, this is a romance and we begin to see both Ken and Greg start to mature and miss each other. Obviously, they make up, have a healthy baby and fadeout (to presumable live happily ever after). Watch particularly for a late scene where Greg meets Alex again and be sure to watch the last scene of the newscast which has a very pointed and very funny (depending on our political views) political point to make. Liked the film more and more as it went on. Definitely one to watch from the always talented Charlie David.
Read more
One person found this helpful
Helpful
Comment Report abuse

Kendra T
5.0 out of 5 stars Such a great movie
Reviewed in the United States on January 23, 2020
Verified Purchase
I really loved this. There really are not enough LGBT movies out there with a happy ending, and this gave it to me in spades. The male pregnancy aspect was definitely an unusual concept because it treated it as a natural phenomenon rather than a fantasy element, but I actually loved that. This explored all of the challenges of a typical unexpected pregnancy like mood swings, altering of the relationship, body changes, and fear of being a good parent. Ken and Greg were a great couple, and I loved watching their relationship and challenges play out. The cast did a great job as well. Very enjoyable.
Read more
One person found this helpful
Helpful
Comment Report abuse

LacrYmosa Wolford
5.0 out of 5 stars Live MPREG!
Reviewed in the United States on January 20, 2020
Verified Purchase
Omg this was sooooo fun to watch! I loved the complex relationship between Greg and Ken. Even when Ken was a bit of an a** you know? Lol. But it was funny, had very real issues pregnant women already face but with a very male twist. I love reading MPREG so if you already like reading it, you’ll love this movie so much more. You’ll appreciate it better as well. There was a little bit of everything and it reminded me of a book I read by Aiden Bates where men were just finding out they could get pregnant. Again it is a funny movie with males able to get pregnant!
Read more
One person found this helpful
Helpful
Comment Report abuse

Jazz
4.0 out of 5 stars An Interesting Concept!!!
Reviewed in the United States on February 1, 2020
Verified Purchase
This is the first time that a movie with this concept as come across my way and I enjoyed it. It was one of those things where I got to see what I read so much about with mpreg and I really enjoyed it. It was interesting to see a man going through what millions of women go through everyday. I loved the concept of this movie. Greg was my favorite character, because we got to see how this pregnancy made hi grow as a person. Ken gave me mixed emotions. Like he was just kind of a little selfish to how being pregnant made Greg feel. It was interesting watching the changes that this unexpected pregnancy brought to their relationship. I enjoyed this movie because it was imperfectly perfect. It showed how unplanned pregnancies can turn your entire life upside down. I loved it. I only didn't give it 5 stars, because Ken made me so mad.
Read more
Helpful
Comment Report abuse

KC
4.0 out of 5 stars A great movie
Reviewed in the United States on January 25, 2020
Verified Purchase
I was not sure what to expect from this movie, but I am glad I watched it. I found it to be enjoyable. It was a good mix of humor, drama, and the realities of pregnancy, along with the stress it can place on a relationship. Aside from the delivery, which seemed to be way too farfetched, it was a beautiful, sweet story of parents experiencing their first (unexpected) pregnancy. I like that the focus was on the pregnancy and the relationship, rather than oversensationalizing who was giving birth.
Read more
One person found this helpful
Helpful
Comment Report abuse

Kathryn M
5.0 out of 5 stars Loved this!
Reviewed in the United States on January 24, 2020
Verified Purchase
I absolutely loved this movie. The concept was interesting and not something I have seen before in a movie. I read mpreg romances and so when I saw this movie I got so excited to read it. And honestly I am not disappointed. There is the drama/angst of the couple dealing with the fact that anything can happen and now has.... there is also the humor of it all. I thought the actors did a fantastic job bringing the characters to life. Highly entertaining story that I definitely recommend.
Read more
One person found this helpful
Helpful
Comment Report abuse

R Keebler
4.0 out of 5 stars Sweet look at a pregnant man and his issues
Reviewed in the United States on January 30, 2020
Verified Purchase
Paternity leave takes on the premise that men are suddenly getting pregnant. Charlie David as Ken and Jacob York as Greg were great. Greg (the pregnant one) was totally believable as a pregnant guy. Ken was a bit of a jerk but overcame the dumb genes thing.

I liked that the movie treated the whole pregnancy thing as normal, without a stereotypical story line. I enjoyed the lead actors very much. Though I wasn’t familiar with Jacob York I liked his expressiveness. I listen to a lot of audio books and have always been excited to find a Charlie David narrated book. I love his voice.

I would recommend this LBGTQ movie to anyone who loves a good story and a happy ending.