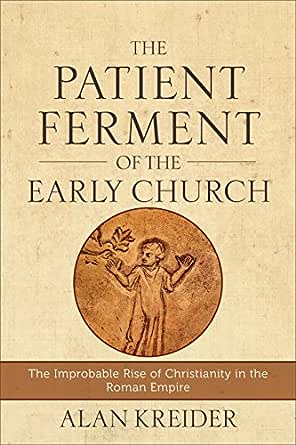 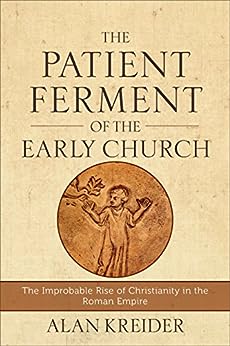 The Patient Ferment of the Early Church: The Improbable Rise of Christianity in the Roman Empire Kindle Edition

"A timely history for the church in our secular age"

"Alan Kreider has done it again. Here he utilizes his immense grasp of early Christian sources, texts, and scholarship to illuminate for us the virtue of Christian patience and its formative nature in articulating an approach to worship and life. Highly recommended."
--Maxwell Johnson, University of Notre Dame; author of Praying and Believing in Early Christianity

"In this lively and insightful study, Kreider draws on deep learning to offer a picture of the early Christian communities at a time when their future was anything but certain. Ancient men and women come to light as people whose improbable success in winning converts was the direct result of their own struggle to live with--and live up to--the powerful ideals of patience and humility. Kreider has the rare ability to read ancient sources from a fresh perspective. A marvelous and inspiring book."
--Kate Cooper, University of Manchester; author of Band of Angels: The Forgotten World of Early Christian Women

"At a time when many scholars interpret the rise of Christianity in terms of power, Kreider provides a refreshing and warranted scenario of early Christian growth from the 'inside.' The reader is invited to discover the slower and more subtle processes that have been neglected in arguments for the rapid rise of Christianity. Herein one will find a means to better balance the scholarly dialogues prevalent today."
--D. H. Williams, Baylor University

"In this remarkable book, Kreider refocuses our attention on patience, the cardinal virtue of the early church's witness, with rich attention to how this was cultivated in worship and catechesis. I can't imagine a more timely history for the church in our secular age."
--James K. A. Smith, Calvin College; author of Desiring the Kingdom and You Are What You Love: The Spiritual Power of Habit

"'Time is greater than space.' Pope Francis has been urging this principle on both the church and movements for peaceful social change. As he wrote in The Joy of the Gospel, 'This principle enables us to work slowly but surely, without being obsessed with immediate results' or 'trying to possess all the spaces of power and of self-assertion.' Kreider's thoroughly researched yet marvelously readable book demonstrates that Francis is actually calling Christians back to the nonviolent patience and winsome witness of the church's first centuries."
--Gerald W. Schlabach, University of St. Thomas --This text refers to the paperback edition.

Alan Kreider (1941-2017; PhD, Harvard University) was professor emeritus of church history and mission at Anabaptist Mennonite Biblical Seminary. For many years he lived in England, where he was director of the London Mennonite Centre and later director of the Centre for Christianity and Culture at Regent's Park College, Oxford University. Kreider authored several books. --This text refers to the paperback edition.

D. Hesselbarth
5.0 out of 5 stars Profoundly challenging; I'm going back to this over and over
Reviewed in the United States on May 7, 2017
Verified Purchase
The remarkable growth of the early church has puzzled and challenged scholars. How did a tiny sect that attracted mainly the poor and unimportant and faced waves of persecution grow? How did they sustain their vigor and their distinctiveness such that well into the third century they were still well known for their non violence and care of the poor and downtrodden? Why did the church make baptism and membership so difficult? I've never found satisfactory answers. Kreider's exhaustively researched book did more than answer those questions. It stirred and challenged my thinking about how to "do church."

He argues, with compelling evidence, that a central conviction by the early Christians had much to do with their sustained vitality. They centered on the teachings of Jesus, in particular the sermon on the mount. They actually believed they were to live in obedience to the upside down Way of Jesus. It was this distinctive and intriguing lifestyle - Kreider uses the term "habitus" or their habitual behavior - that the church insisted upon and that attracted others. They patiently lived in community, expecting that over time, the impact of the light of their lives would "bubble up" or ferment in the lives of their neighbors.

So, rather than emphasize evangelism, the early Christians emphasized catechesis - careful formation and teaching. Only after a lengthy period of time - up to three years! - during which the prospective member was mentored and drilled in the life of Christ, was the person allowed to be baptized and take the Lord's Supper. They had to demonstrate, prove, that they were indeed genuinely living the life of Christ. Caring for the poor, sharing their resources, returning good for evil, turning the other cheek - those things had to be demonstrably evident.

Kreider ends by contrasting this patient habitus with the changing focus after Constantine. His examination of Augustine's redefinition of faithful Christian living that provided a way for Christians to both claim allegiance to Jesus' teachings yet use force and violence was both incisive and deeply saddening.

These days, most followers of Jesus do a better job of rationalizing why they can't take the Sermon on the Mount as more than platitudes. This book further challenges me, and I hope, the church at large, to actually live like Jesus! What a novel idea.

There are just a handful of books that have deeply influenced me, books that I find myself returning to again and again. The Patient Ferment is one of those books now. I hope this book becomes widely read, and even more, widely influential. May it disturb our comfort...
Read more
13 people found this helpful
Helpful
Comment Report abuse

Jose Sopla
5.0 out of 5 stars Worth Reading
Reviewed in the United States on August 1, 2016
Verified Purchase
Certainly worth the read. The main theme is how the character of a community, in this case the community of Christians of the Roman Empire, changes when it becomes a major tool of government, in this case from one of growth through patience and free will to one of growth through waning patience and often force.

Certainly exciting time to be Christian in a western civilization country, whose governments by now view Christians with hostility as a minority body, certainly a challenge for Christians who once again may have to put patience at the forefront of their character.
Read more
7 people found this helpful
Helpful
Comment Report abuse

Amazon Customer
4.0 out of 5 stars A pacifist's look at early Christianity .
Reviewed in the United States on June 26, 2018
Verified Purchase
If I came away with one thought , it was that the early church began to decay immediately after the death of the Apostles. How the church can go from the Ethiopian eunuch being baptized immediately upon belief to the church requiring two years of catechism before a person can be baptized within 50 years of Jesus's death is beyond me. Also , it was interesting how women were an intricate part of the early church , but as the church formalized , it became increasingly male-dominated . I especially appreciate the authors humble call for the church to return to a patient habitus without dictating how that is to be accomplished. Also, a step-by-step guide would be easier to follow . It just wouldn't be practical.
Read more
3 people found this helpful
Helpful
Comment Report abuse

Rob Y
5.0 out of 5 stars The power of patient presence
Reviewed in the United States on July 7, 2020
Verified Purchase
We are all shaped by the culture we live in and it's hard to imagine a way of being other than what we see around us. Kreider takes us back 2000 years to examine what animated the Church in the first four centuries CE and he invites us to watch how it changes as we move into and through the 4th century. There are HUGE lessons for us to learn as we navigate our current reality by looking back to see what happened when patience became more elastic, love became more pragmatic, and a sense of anxious urgency began to shape the Church's way of being in the world.
Read more
Helpful
Comment Report abuse

Mtnuglet
5.0 out of 5 stars In today's atmosphere of the Great Commission being so important
Reviewed in the United States on January 23, 2017
Verified Purchase
Well researched book. In today's atmosphere of the Great Commission being so important, which I agree it is, this book brings up the attitude that it seems as though the early church had a patient, long view towards growth. As Kreider points out, part of this was due to potential threat of persecution that the early church had to deal with on a day to day basis, which led them towards greater caution. However, that was not the only motive behind their slower growth strategy. Want to learn more, then buy the book and read it.
Read more
One person found this helpful
Helpful
Comment Report abuse

harold turpin
5.0 out of 5 stars A MUST READ!
Reviewed in the United States on July 17, 2018
Verified Purchase
this is a great book to read. the author tells by researching the early writings of the church after the time of the apostles, how the church grew in times of persecution. the results will surprise you for they did not practice evangelism the way we do today to get the church to grow. this is a highly recommended book.
Read more
One person found this helpful
Helpful
Comment Report abuse
See all reviews

Russell Sawatsky
5.0 out of 5 stars Lessons from the Early Church for the Church Today
Reviewed in Canada on April 9, 2017
Verified Purchase
A fascinating introduction to the early church. In my opinion, this study of the pre-Constantinian/pre-Christendom church offers a great deal of insight for us in these post-Christendom times.
Read more
Report abuse