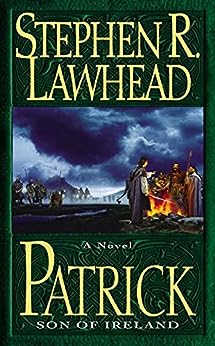 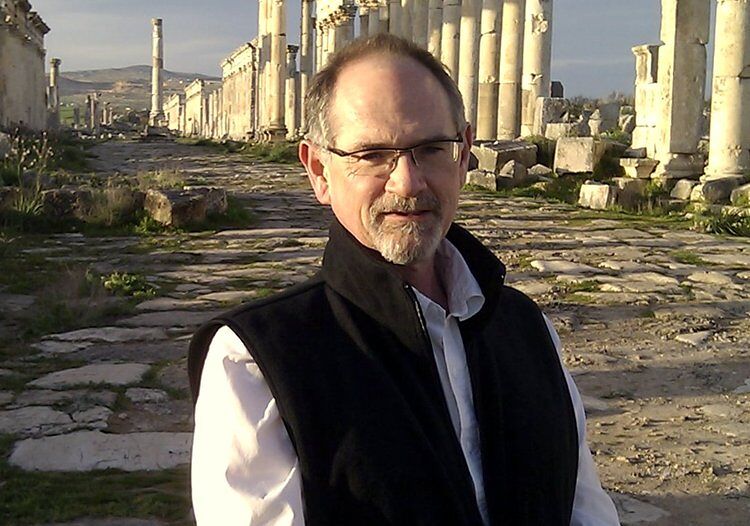 Devotees of prolific historical novelist Lawton (The Iron Lance) will enjoy this picaresque, which follows the legendary eponymous Irish saint through the "lost years" between his escape from slavery and his missionary work in Ireland. Though Succat, the hero, does not receive his more familiar name until late in the story and doesn't encounter even a single snake, he blazes a thrilling-and meticulously researched-trail across the Holy Roman Empire. Succat, the son of a Christian family of well-to-do fifth-century Britons, is captured by Irish raiders and sent to Ireland as a slave. After years of brutal conditions, he manages to escape. Having lost his faith in the Christian God while a slave, Succat studies druid theology and lives in a home with other druids, who give him the name "Patrick," Celtic for nobleman. He eventually returns to Britain; serves for a while as an assistant to Bishop Cornelius, who helps him find his faith again; studies in Gaul; and goes on to Rome, where he becomes a city official, marries and has a daughter. Yet Patrick is haunted by his memories of Ireland and comes to believe that he has a special mission there: to convert the Irish people to Christianity. His triumphant return changes the history of Eire. Lawhead wisely keeps the fantasy and folklore to a minimum and never grants Succat superhuman qualities. Patrick is unfailingly sympathetic and believable, and his story of losing and finding faith will resonate with a wide spectrum of readers.
Copyright 2003 Reed Business Information, Inc. --This text refers to an out of print or unavailable edition of this title.

*Starred Review* Presumably the first installment of another of his fine medieval trilogies, Lawhead's Patrick portrays the famous saint's youth, beginning with his privileged, reckless young manhood in Wales. Patrick is captured by pirates and spends seven painful years as a slave to an Irish chieftain. At last he escapes, in some ways betraying the woman he loves, and makes his way to Gaul. He becomes a soldier, rises in the ranks, and marries a Roman noblewoman. This may be the novel's weakest point, for the reader knows Patrick's wife has to die, or he'll never return to Ireland for his true life's work. In any case, Patrick is well-researched, earthy, and full of action--about all one could desire in a historical novel. John Mort
Copyright © American Library Association. All rights reserved --This text refers to an out of print or unavailable edition of this title.

A magnificent historical novel about the early life of the man who would one day be known as St. Patrick

In the summer of the year AD 405, Irish raiders under the command of King Eochaid attack the western coast of Wales, setting fire to towns and farms, stealing cattle and grain, and carving a fiery swathe through the peaceful countryside. Many of those who survive the attack are rounded up and carried back to Ireland.

Among the survivors is a 16-year-old boy named Succat--the impulsive and willful young scion of a British noble family--who is sold in the slave market to a merciless ruler. When Succat is gravely punished after a foiled attempt to escape, he comes to the attention of Cormac, a novice Druid eager to practice his healing skills. Succat learns to respect the Druid's lore and love of learning and is given a new name, Patrick, the Celtic word for nobleman.

What follows is the story of Patrick's missing years--years of calamity, defeat, and crushing disappointment that form him into a bard and advisor to the High King of Ireland, and lead to the mission for which his name will be remembered throughout history. --This text refers to an out of print or unavailable edition of this title.

Stephen R. Lawhead is an internationally acclaimed author of mythic history and imaginative fiction. His works include Byzantium and the series The Pendragon Cycle, The Celtic Crusades, and The Song of Albion. Lawhead makes his home in Austria with his wife.

`An enjoyable, sweeping and often touching tale of bravery 'SFX `This is a rip-roaring adventure story; the pace rarely flags. There's scheming, murder and betrayal aplenty'Interzone `A vivid historical setting and a lengthy and satisfying plot'Publishing News --This text refers to an alternate kindle_edition edition.
Read more

4.6 out of 5 stars
4.6 out of 5
134 global ratings
How are ratings calculated?
To calculate the overall star rating and percentage breakdown by star, we don’t use a simple average. Instead, our system considers things like how recent a review is and if the reviewer bought the item on Amazon. It also analyzes reviews to verify trustworthiness.
Top reviews

Deby
5.0 out of 5 stars Riveting
Reviewed in the United States on January 20, 2020
Verified Purchase
Very well written and researched. Couldn't put it down. Stephen Lawhead's books are so thoroughly researched and well written I read them over and over and I also have them in audio books. It was fascinating to hear the back story of Patrick and what made him who he was to Ireland
Read more
2 people found this helpful
Helpful
Report abuse

Syl
3.0 out of 5 stars Left Disappointed
Reviewed in the United States on August 31, 2020
Verified Purchase
I purchased and read this book with high hopes of learning how Patrick went about converting the peoples of Ireland to Christianity. Ironically that’s the one thing I did not learn. I waded through endless material about his Druid days, but very little about his Christian mission. Why??? Granted the book is very well researched and written but it ended way too soon. I was shocked and let down when I came to the end!! I’ll have to go looking for another historical novel that tells me. Yes, I could have read another book about Patrick’s missionary days, but I thought it would be interesting to also learn about his early days. That was all good. Why didn’t the author include Patrick’s missionary days in Ireland? I’m seriously disappointed.
Read more
Helpful
Report abuse

Susan Mecredy
5.0 out of 5 stars Best book I have read in years!
Reviewed in the United States on June 14, 2016
Verified Purchase
This is the first novel I have purchased in years. I had checked it out from our library and had to renew it in order to finish it. It is a thick book written in intelligent vocabulary and excellently written in first person. It kept me reading way too late at night as I didn't want to put it down. When I finished it, I decided it was a must have for my personal library. I can't recommend this book enough.
Read more
6 people found this helpful
Helpful
Report abuse

Active Senior
5.0 out of 5 stars One of the best I’ve ever read!
Reviewed in the United States on October 20, 2020
Verified Purchase
Not only a well-written great tale, but one with a strong message of discernment that many readers will see as a story of themselves. I did. Thanks Stephen.
Read more
One person found this helpful
Helpful
Report abuse

Kendall
5.0 out of 5 stars Nice transition between new and older Celtic traditions
Reviewed in the United States on March 15, 2021
Verified Purchase
Great story with Lawhead's characters developed very throughly, as you would expect from Mr. Lawhead.
Read more
One person found this helpful
Helpful
Report abuse

Eric Wilson
3.0 out of 5 stars 3 1/2 Stars...Am I Missing a Sequel?
Reviewed in the United States on May 10, 2003
Verified Purchase
I'm a big fan of Lawhead's "The Iron Lance" and his "Song of Albion" series. With high hopes, I purchased this historical novel. My knowledge of St. Patrick is limited, and I looked forward to discovering more of his life and his spiritual influence in Ireland.
"Patrick: Son of Ireland" does many things well. The settings are believable and well-researched, the language fluid, and the dry details turned into fascinating tidbits. I particularly enjoyed the Roman battle scenes and descriptions of the Plague. Sobering stuff. Succat, later known as Patrick, is a character with flaws and foibles, a man who grows slowly into the understanding of his calling. And when Succat comes to a final point of humility and turning, Lawhead paints a succint and touching scene. He employs Pelagius, who plays a minimal part in only the final thirty pages of the book, to address Succat: "You have learned what a man can do in his own strength...Perhaps now it is time to learn what God can do with a man who knows the limits of his strength."
Unfortunately, the book never allows us to see the result of this turning. We witness years of futility in Succat's life, and, in fact, we ourselves grow weary of his attempts to escape slavery and of the deceits he thrusts upon even those he claims to love. I appreciate that all this brings Succat to a medieval mid-life crisis, but I would've enjoyed seeing the working out of his newfound knowledge. I even started to suspect that Lawhead would be throwing a sequel our way. Instead, he throws us a bone--a prologue and epilogue that tidily skim over Patrick's years of hard spiritual work.
I trod my way along the arduous trails of Succat's life, found some wisdom to be gained and some eventual rewards, but felt cheated by the blithe conclusion. Am I missing a sequel, or is this all we get?

Marigold
5.0 out of 5 stars I really enjoyed this book
Reviewed in the United States on July 18, 2016
Verified Purchase
I really enjoyed this book. Actually this is my third time reading it. My daughter owns the hardcopy and I have borrowed it from her in the past. I decided to get my own copy as I know it is one I will read every few years. Well written. Great story-teller.
Read more
2 people found this helpful
Helpful
Report abuse

sally
5.0 out of 5 stars Patrck
Reviewed in the United States on June 23, 2019
Verified Purchase
This was a great read. Never a dull moment.
Read more
One person found this helpful
Helpful
Report abuse
See all reviews

The Gael
5.0 out of 5 stars Patrick the man
Reviewed in the United Kingdom on January 4, 2014
Verified Purchase
I have found this book to give me a look at what Patrick the man might have been. the frail and very human Patrick, with all the human feelings and doubts. The book also shows Tara and New Grange and how Patrick must have seen them in the possible every day usage of his time.
Read more
One person found this helpful
Report abuse

elizabeth-anne mckinnie
5.0 out of 5 stars More of Patrick please!
Reviewed in the United Kingdom on February 5, 2015
Verified Purchase
Well written but it left me wanting to know what happened subsequently, to Patrick.
Read more
Report abuse

taxman2
5.0 out of 5 stars Excellent story
Reviewed in the United Kingdom on January 21, 2013
Verified Purchase
Recommended by friend - not what I usually read but the storyline is great and I am enjoying this genre.
Read more
One person found this helpful
Report abuse