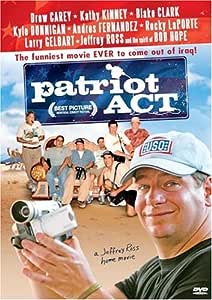 Inspired by the passing of U.S.O. perennial Bob Hope, Friars Club roast-master Jeffrey Ross takes Drew Carey up on an invitation to join the U.S.O. in their ongoing mission - delivering punch-lines to the front lines. Having just bought a new camcorder, he travels to Iraq and captures his rare, intimate, and often times hilarious experience on camera. Armed with nothing but that camcorder and some jokes, Ross shoots his own life-changing experience as he travels alongside six other well known comics, entertaining battle weary G.I.'s stationed in some of the most remote parts of the Sunni Triangle.

When standup comedian Jeffrey Ross joined Drew Carey's U.S.O. show that toured through Iraq during the first year of the American occupation, he took along a video camera and made a clumsy but strikingly intimate portrait of the armed forces. Performing in venues as different as the Baghdad Civic Center and a camouflaged camp in the middle of the desert, seven comedians (Ross, Carey, Kathy Kinney, Blake Clark, Kyle Dunnigan, Andres Fernandez, and Rocky LaPorte) did what they could to entertain soldiers who suffered sand, heat, and being shot at--but the brief snippets of rough comedy are little more than a sidelight. The most intriguing aspects of Patriot Act (which, despite its title, is largely apolitical) are the simple conversations with G.I.s, bellhops, translators, and others, who endure a difficult situation with a weary smile and a little glimpse of hope. It's the ordinary effort of life that comes through, even when surrounded by bombed buildings and armored vehicles. Ross has no great insights, but he proves an affable and earnest tour guide. --Bret Fetzer

William D. Thurmond
5.0 out of 5 stars Saw him in Baghdad, great show
Reviewed in the United States on August 8, 2006
Verified Purchase
Just ordered the DVD, so I can't comment on the film. However, Jeffrey's performance in Baghdad was tremendous. He was by far the funniest comedian to perform that evening, with Kathy Kinney a close second, who simply read the newspaper and provided an hilarious, unscripted commentary. His "poetry" was inspired. The theater was packed with troops (and a few Iraqis who seemed confused -- stand-up doesn't translate too well). Everybody had a great time forgetting about the war for an hour or so. I'm sure this DVD will bring back a good memory from a time and place that had relatively few.

Kudos to Jeffrey, his fellow comedians, and to all those who make the trek to entertain troops at war. Your sacrifice, and the risk you take, is greatly appreciated by those of us in uniform. I'm sure Bob Hope is smiling appreciatively.

Mikhail K.
5.0 out of 5 stars Laughing is Allowed
Reviewed in the United States on March 1, 2012
Verified Purchase
This product receives 5 stars based on my appreciation in it making me laugh. The documentary style is unique for that time and a style that seems to be more prevalent as more and more documentaries come out.

As for the participants, I was able to meet all of them during their visit to Baghdad. They were all very thankful for us troops as we were all thankful to them. I remember seeing the small video camera Jeffrey Ross had braced on the table next to him as we all walked by to get signatures. Their willingness to take photos with us soldiers might have extended their visit and our line time but it was well worth the wait.

All of this is why I enjoyed the movie and hope you will too.

K. Wert
5.0 out of 5 stars GREAT
Reviewed in the United States on February 9, 2009
Verified Purchase
"Patriot Act" was a very good dvd. It is a comedy but I cried a lot through it because my son has been in Iraq/Kuwait twice. I kept looking for him - didn't see him though. Of course he has since come home and been deployed elsewhere. I am just so grateful for the entertainers so unselfishly give of there time and take the risk of going over to where our precious troops are to entertain them. That is just so admirable and appreciated.
Read more
Helpful
Report abuse

vince west
5.0 out of 5 stars Patriot Act: A Jeffery Ross home Film dvd
Reviewed in the United States on September 25, 2015
Verified Purchase
VERY VERY funny and shows how scary it can be over there for the guys and troops. Drew Carrey and his group of comics including Jeffery Ross put on great shows and face A LOT of danger. Short but sweet dvd. And surprising too.
Read more
Helpful
Report abuse

Nathan W. Weier
5.0 out of 5 stars I was there!!!
Reviewed in the United States on May 6, 2007
Verified Purchase
I was in Tikrit, Iraq when Jeffrey Ross, Drew Carey, Kathy Kinney and others came to entertain us. It was awesome, and a much needed laugh! Jeff even mooned us when the song, "I like big butts and I can not lie..." was played, I never laughed so hard in my life! Our company was at a diffrent base from where they performed and because it was a night show we had to stay at that base and truck some gear there to stay over for this show, but it was well worth it!!!
Read more
3 people found this helpful
Helpful
Report abuse

G. Walker
3.0 out of 5 stars A little rough around the edges and preachy
Reviewed in the United States on May 8, 2012
Verified Purchase
I love Jeffrey Ross, but this movie isn't very good. It's very low budget and it shows. It's also waay too preachy about the war in Iraq and how awesome America is for invading another country. It was cool being able to see that part of the world being filmed by a normal guy though.
Read more
Helpful
Report abuse
See all reviews