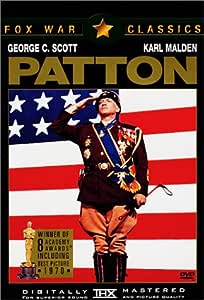 Secure transaction
Your transaction is secure
We work hard to protect your security and privacy. Our payment security system encrypts your information during transmission. We don’t share your credit card details with third-party sellers, and we don’t sell your information to others. Learn more
Details
Ships from
Lunch money
Sold by
Lunch money
Return policy: This item is returnable
You may be charged a restocking fee upto 50% of item's price for used or damaged returns and upto 100% for materially different item.
Read full return policy

George C. Scott, Karl Malden, Michael Bates. One of the greatest but most complex military geniuses ever is depicted in Oscar-winning form by Scott who won and abruptly refused the coveted Best Actor Award for his extraordinary performance. DVD released 11/6/2001.

4.8 out of 5 stars
4.8 out of 5
6,258 global ratings
How are ratings calculated?
To calculate the overall star rating and percentage breakdown by star, we don’t use a simple average. Instead, our system considers things like how recent a review is and if the reviewer bought the item on Amazon. It also analyzes reviews to verify trustworthiness.

Steven R. Swanson
2.0 out of 5 stars Great movies, crummy BluRays
Reviewed in the United States on June 24, 2017
Verified Purchase
This set gets a one star rating for the way the playing of the movies was setup on the BluRay disks.

These are four great movies that I've enjoyed many years and I wanted the BluRay editions to see the best images I could on my new 4K television. I've watched 3 out of the 4 so far.

I have several major complaints.

First, the BluRay disks are setup so I have to watch trailers for other movies that I don't want or even like. I did not buy the BluRays to watch crummy trailers for bad movies! This happens every time you watch the movies for as long as the BluRay remains in your collection.

Second, the menus are locked so you can't select what you want.

Third, the BluRays are setup such that there is no way to resume watching where you had to stop or power down the player for any reason what so ever.

Fourth, having to fight with the BluRays to avoid the trailers or to resume watching where I left off impairs the enjoyment of great movies.

I really wish that producers would think about their customers than their advertising office. Because of having to watch the crummy trailers and not being able to resume the movie where I stopped, I would not buy this set again nor would I have bought it in the first place if I knew these problems existed.

Update: I finally watched the fourth movie, Sand Pebbles. That disk didn't have the problems that the other three have. It was pleasant to be able to watch a movie with out trailers for other movies and to be able to stop the movie and be able come back to the stopping point with out fighting the BleRay set up. I raised my rating to two stars because this disk was done right.
Read more
58 people found this helpful
Helpful
Report abuse

KMVT
5.0 out of 5 stars Patton Was the Real Deal
Reviewed in the United States on June 16, 2018
Verified Purchase
Patton was the real deal. As a man, his belief in re-incarnation played a role in victory. Whether that is physically true is unseen, but as a scholar he knew the land and the historical spirit of the land intimately. He knew the enemy as well as himself; a self-taught psychologist in a way. A true warrior always on the offensive, Patton was not fatuous in his abilities; victory is not and cannot be political; it is the total and complete annihilation of the enemy. Patton was a bulldozer. His temperament had ramifications, but it is completely irrelevant as I can't imagine one with a thirst for blood is at all normative in behavior. He was never insubordinate. (I think some of comments was simply misunderstood humor). Eisenhower ranked generals in order of greatness/ importance, placing Patton third. Spatz and Smith took one and two as strategists. Eisenhower said Patton was a a brilliant executor. In this thinking, there should be two categories: strategy and implementation. Patton was an authentic general. Overall, the greatest generation worked as a united, complete whole. Patton summed it up best - Every man is vital. Even the soldier who boils water so you don't get the shits is essential. As for the film, I'm a critic in no way. I enjoyed the movie. The focus is not guts and gore such as in Saving Private Ryan, et al, which is purposeful because it doesn't detract from the film's focus. There needs to be more films on Patton offering more perspectives. I'd like one that focuses on his childhood and education. Given his belief in re-incarnatiinon, we need a more intimate portrait. into the man. The ending is perfect. Rather than focusing on the car accident, it was symbolized by heading off into the sunset.
Read more
25 people found this helpful
Helpful
Report abuse

will crow
2.0 out of 5 stars the reason we hate dictators
Reviewed in the United States on November 7, 2020
Verified Purchase
Patton's everything that wins wars, and makes people hate. I said it right, he's the reason people are moved to the extreme distance of hate in their hearts. He's rude, pompous, arrogant, he's belligerent and overbearing. Nothing about him works with peacetime.
Even his wartime presence is filled with half hearted salutes, visible disdain for combat troops resting after hard fought battles and the perils and hardships of being a common foot soldier.
Yes, he's supposed to be a tireless foe of the enemy, but he's so disagreeable, and so abusive to his own troops it's nearly impossible to have any empathy or even respect for him as a man.
Maybe he was 'the man for the moment' but he was quickly maneuvered out of the chain of command when more competent tacticians and commanders were available.
He's the reason we as the human race, forget the names of 'great leaders' and instead laud the works of poets, mathematicians, scientists, and artists.
Our bully beat up your bully, now lets get on with the task of living, and loving, and enjoying life.
Read more
2 people found this helpful
Helpful
Report abuse
See all reviews

Robert H.
5.0 out of 5 stars A flawed genius
Reviewed in the United Kingdom on May 6, 2020
Verified Purchase
Didn't know much about Patton before. However watching this movie gave me a better understanding of him. Long but great movie. George c Scott is outstanding. Can see why he won awards. Patton as a man was a genius in war. Lo had a big ego which at times got him in to trouble. Recomend this movie
Read more
2 people found this helpful
Report abuse

Il Padrino
5.0 out of 5 stars Powerful Performance
Reviewed in the United Kingdom on December 28, 2018
Verified Purchase
Very few movies will ever be classics that will stand the test of time. George C. Scott delivers a performance that makes Patton a relevant and powerful movie that will be watched and watched for years to come. Well worth buying.
Read more
3 people found this helpful
Report abuse

Billersk
5.0 out of 5 stars A classic WW2 movie in Blu-Ray quality
Reviewed in the United Kingdom on June 16, 2018
Verified Purchase
What a movie .... looks great on Blu-Ray and it's one of those films that you can enjoy more than once. George C Scott was amazing in the part and at the end you have some serious questions to ask. A WW2 movie classic that has passed the test of time.
Read more
5 people found this helpful
Report abuse

Gordon Ross Sinclair
5.0 out of 5 stars Nostalgia.
Reviewed in the United Kingdom on February 23, 2018
Verified Purchase
Arrived as stated. Haven’t watched it yet but saw it when it was released at cinema so am aware of content. Used his famous ‘6 Ps’ quote throughout my working life - ‘Proper Planning Prevents P*ss-Poor Performance’ ...
Read more
4 people found this helpful
Report abuse

Lewis Logue
5.0 out of 5 stars Rommel... You magnificent b****** I read your book!
Reviewed in the United Kingdom on April 16, 2019
Verified Purchase
An amazing film and debut of Francis Ford Coppola, who would later write the screenplay for The Godfather. An amazing performance by George C. Scott who plays the American general, George S. Patton, who (no pun intended) commands the scene he's in. Accompanied by excellent practical effects and a soundtrack by Jerry Goldsmith. I would go more in depth, but that would require a video on its own right. Overall, a great movie and a worthwhile watch.
Read more
3 people found this helpful
Report abuse
See all reviews