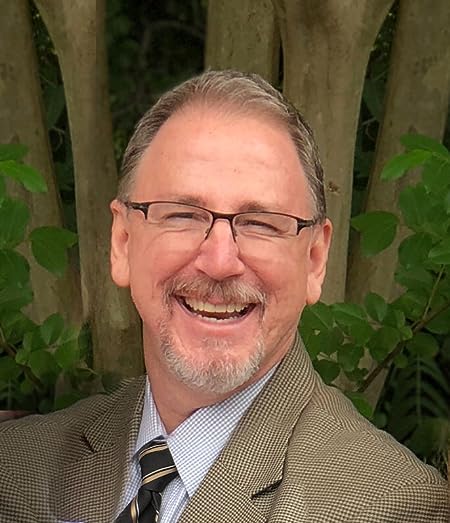 Paul Kendall is an author who writes on the topics of marriage, parenting, family and spiritual growth. His material is drawn from his own life's experiences including nearly 30 years of counseling individuals and couples, making his writings practical and very personable. When reading his books, you will feel as though you are listening to a dear friend.

Paul is also the host of the nationally syndicated radio program "Family Matters." Paul is the Senior Pastor at United Family Church in Lewisville, North Carolina.

Paul and his wife, Evie have been married for 40 years and have two incredible children, Alex and Rene', as well as a wonderful son-in-law, Austin (married to Rene'), a beautiful daughter-in-law (married to Alex) and two precious granddaughters, Hope and Ella (Rene' & Austin's children).

In Paul's Amazon portfolio, you will find full books as well as short booklets (usually priced for .99 or free) that focus on smaller topics. 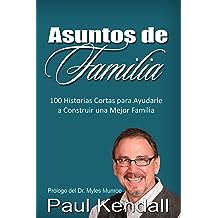 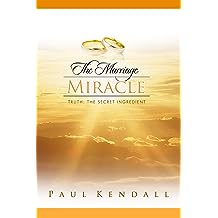 The Marriage Miracle: Truth: The Secret Ingredient Nov 20, 2014
by Paul Kendall
( 5 )
$9.99
Truth, that’s what you've opened this book to find; you want information that is solid and trustworthy. You need truth because truth always works, just like two plus two always equals four. Truth will work in your marriage every time, regardless of your circumstances.
“The Marriage Miracle” would be a facetious title for a book if it were based on a man’s theory but this book is not based on man’s theory; it’s based on the most trustworthy source of wisdom—God’s Word.

Isaiah 55:11 says that “God’s Word will not return void;” how is that possible? Because God’s Word is truth, and truth always works. That scripture goes on to say that whatever His Word is spoken into will prosper; it prospers because the truth replaces the lie and when your decisions and actions are based on truth your circumstances begin to change. This book is filled with Biblical principles of truth that will bring new life to your marriage if you simply apply them.

As you read these pages, you will learn techniques that when applied to your marriage, will always work. Now I know the idea of learning techniques may sound less than exciting, until you realize that you are already using them in your marriage. The problem is they are not working; you’re not getting the results that you desire. Therefore, your greatest challenge in this book will be to replace your ineffective techniques with new ones, based on principles of truth.

My wife Evie and I have been married for nearly 30 years now, but in our 13th year of marriage we hit rock bottom. It was a very, very dark time. We were two signatures away from a divorce and basically just trying to decide what would be best for our two children under the circumstances, when somebody suggested that we go to marriage counseling. I didn't like that idea because I always considered myself to be the helper and not the helpee. Besides, I was a minister and truthfully I was pretty embarrassed to go. But I decided to go for one reason only: so that after my divorce, I could look my two children in the eyes and tell them, “I tried everything to make it work with your mother… even counseling!” It was definitely the wrong reason to go, but it got me there. We joined one of their groups and went on to learn things in that program that we had never heard before. At the end of the twelve weeks we were not all better, but we had all of the tools that we needed to get all better. We continued to use the tools for weeks and months and I’d like to tell you that we got better quick, but it actually took us about two years to get to where we needed to be. That might seem like a long time, until you consider the fact that that was about 17 years ago. So two years now seems like a drop in the bucket and certainly worth all of the healthy years of marriage that we've enjoyed since then. Our children have also been able to grow up in a house with their biological mom and biological dad present. So, I know things may seem really tough for you. I’m sure that they are, but I want to encourage you to put your trust not in a person, not in a book, but in God’s truth, and trust God to transform your marriage just like He did mine.
Read more
Other Formats: Paperback 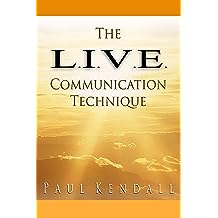 The L.I.V.E. Communication Technique: A Better Way to Communicate Dec 7, 2014
by Paul Kendall
( 1 )
$0.99
Poor communication is the #1 relationship killer; whether it's a spouse, child, coworker or just a friend, the inability to communicate effectively could cause the relationship to suffer greatly and possibly be its demise. Simply put, many people do not know HOW to communicate effectively. Even when we have the best intentions, our words are easily misunderstood and communicate something we never meant to say. Conversely, we often misunderstand what others are trying to communicate to us--and the dysfunctional cycle continues day after day.

Wouldn't it be great to develop a new way to communicate that insures you receive and deliver the right messages? This little booklet (2,400 words) will help you do just that. It may take some time to develop, but once you've mastered the L.I.V.E. Communication Technique, it will become your new way of communicating--and people will begin to tell you, "I love talking to you ... You always seem to really listen and understand."
Read more
Other Formats: Paperback 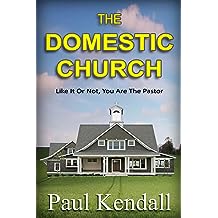 The Domestic Church: Like It Or Not, You Are The Pastor Dec 12, 2014
by Paul Kendall
$0.99
When I say the word “CHURCH” the first thing that comes to mind is probably the place where people gather every Sunday to worship and hear sermons about how to live a Christian life. What you’re experiencing when you are at that place is the “Congregational Church.”

This is the church that meets in your very own home 365 days a year and never closes. Its ministries influence the lives of every member of your family whether the teaching is intentional or unintentional.

This little booklet (2,700 words) will help you see that the most important church is … The Domestic Church.
Read more
Other Formats: Paperback 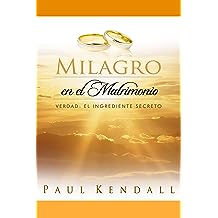 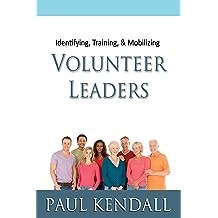 Identifying, Training, & Mobilizing Volunteer Leaders Dec 8, 2014
by Paul Kendall
$2.00
It’s the age old complaint; “We never have enough volunteers.” It’s the 80/20 rule; “20% of the people do 80% of the work.” It’s the burn-out syndrome; “He was doing everything and he just got burnt out.” The church has a history of difficulty when it comes to volunteerism. I suffered the same for most of my thirty years in ministry until I became a pastor at a church of 1,700+ congregants and was forced to come up with a solution for my department. The end result is a department of 16 very strong ministries, run on a small budget, led by 31 directors and 126 leaders that minister to over 500 people per month. All of which are … volunteers.

If that were not good enough, these volunteers show no sign of burning out or quitting. They’re actually energized and reproducing themselves. The programs are continuing to grow and spread to the point that other churches are requesting our material. What is the secret ingredient? The short answer is simply this: solid curriculum, detailed training, and mobilizing people to do the work of Christ. It’s a concept called “discipleship.” Jesus came up with it a long time ago and it still works to this day. Exactly how does that happen in our modern society? The long and much more detailed answer is in the remainder of this booklet.
Read more
Other Formats: Paperback 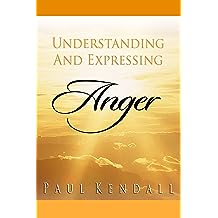 Understanding and Expressing Anger Dec 1, 2014
by Paul Kendall
( 5 )
$0.99
Anger, everyone deals with anger. Some deal with it better than others, but until you understand the root of anger you will never know how to handle it and properly express it. This little 3,500 word booklet is a chapter from The Marriage Miracle book which is also available here on Amazon. If you benefit from this excerpt, you will benefit from the larger book.
Read more 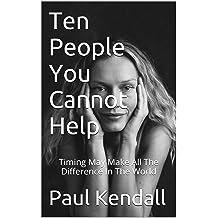 Ten People You Cannot Help: Timing May Make All The Difference In The World Nov 23, 2014
by Paul Kendall
( 9 )
$0.99
Ever wondered why some people simply WILL NOT receive your help? It may be that they are simply not ready to accept yours or anyone's help. Continue to try and you will find yourself exhausted and frustrated. But how do you know if a person is a candidate for your help or not? I've made the answer to that question very simple and clear in this short booklet (approximately 2,500 words) by describing the Ten People You Cannot Help.

This teaching has received the most interest and response of all my Family Matters radio programs over the past fifteen years. Listeners and readers have found great insight and comfort when they discover WHY their friends and loved ones are not responding to their attempts to help--and--learning the signs of when that person IS ready to receive their help.

The point of this book is not to kick people to the curb, but to identify when they are ready to receive your help. The timing may make all the difference in the world!
Read more
Other Formats: Paperback 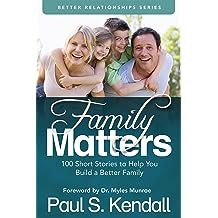 Family Matters: 100 Short Stories to Help You Build a Better Family Nov 22, 2014
by Paul Kendall, Myles Munroe
( 5 )
$4.00
This erudite, eloquent, and immensely thought-provoking work gets to the heart of the deepest passions and aspirations of the human heart’s desire for a successful family. This is indispensable reading for anyone who wants to live life above the norm and experience God’s design for the original family. This is a profound authoritative work which spans the wisdom of the ages and yet breaks new ground in its approach and will possibly become a classic in this and the next generation.

This exceptional work by Paul Kendall is one of the most profound, practical, principle-centered approaches to this subject of the Family that I have read in a long time. The author’s approach to this timely issue brings a fresh breath of air that captivates the heart, engages the mind and inspires the spirit of the reader.

The author’s ability to leap over complicated theological and metaphysical jargon and reduce complex theories to simple practical principles that the least among us can understand is amazing. This work will challenge the intellectual while embracing the layman as it dismantles the mysterious of the soul search of mankind and delivers the profound in simplicity. Paul’s approach awakens in the reader the untapped inhibiters that retard our personal development and his antidotes empower us to rise above these self-defeating, self-limiting factors to a life of exploits in spiritual and mental advancement. The author also integrates into each chapter time-tested precepts giving each principle a practical application to life making the entire process people-friendly.

Every sentence of this book is pregnant with wisdom and I enjoyed the mind-expanding experience of this exciting book. I admonish you to plunge into this ocean of knowledge and watch your life change for the better.