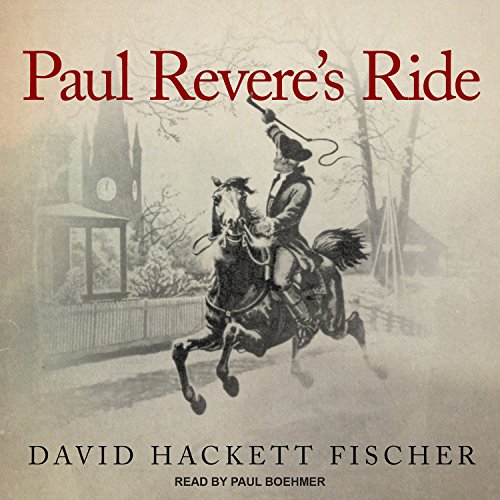 Paul Revere's midnight ride looms as an almost mythical event in American history - yet it has been largely ignored by scholars and left to patriotic writers and debunkers. In Paul Revere's Ride, David Hackett Fischer fashions an exciting narrative that offers deep insight into the outbreak of revolution and the emergence of the American republic. Beginning in the years before the eruption of war, Fischer illuminates the figure of Paul Revere, a man far more complex than the simple artisan and messenger of tradition. When the alarm riders took to the streets, they did not cry, "The British are coming", for most of them still believed they were British. Within a day many began to think differently. For George Washington, Thomas Jefferson, John Adams, and Thomas Paine, the news of Lexington was their revolutionary Rubicon.

Paul Revere's Ride returns Paul Revere to center stage in these critical events, capturing both the drama and the underlying developments in a triumphant return to narrative history at its finest.

Special invitation from Audible!
Learn more about Membership
List Price: $29.95
You Save: $3.74 (12%)
By completing your purchase, you agree to Audible’s Conditions Of Use
Sold and delivered by Audible, an Amazon company
Share

4.7 out of 5 stars
4.7 out of 5
621 global ratings
How are ratings calculated?
To calculate the overall star rating and percentage breakdown by star, we don’t use a simple average. Instead, our system considers things like how recent a review is and if the reviewer bought the item on Amazon. It also analyzes reviews to verify trustworthiness.

Whisper
5.0 out of 5 stars An excellent read. While Fischer's unabashedly pro-American slant may trigger ...
Reviewed in the United States on May 28, 2017
Verified Purchase
An excellent read.

While Fischer's unabashedly pro-American slant may trigger PTSD in certain west-coast hipsters, he presents an accurate, well-documented, informative, and extremely readable account of the battles of Lexington and Concord. Not only that, he gives an excellent sense of popular opinions of the Revolution, the daily thoughts and priorities of the average pre-American citizen, and how these two interacted... thoroughly shattering the modern pseudo-intellectual myth that the American Revolution was the pet project of a small group of wealthy colonial elites who resented the restraining influence of the British crown.

While it is very clear that the author approves of the Revolution, the work maintains a healthy sense of objectivity and does not stray in propaganda (however justified it might be if it had). The British regular forces and their officers are treated not as a faceless enemy, but as historical and personal figures who are to be understood not only in terms of their actions, but with thought and analysis given to the motivations and beliefs behind them (in fact, it is revealed that a fair number of these were decidedly pro-colonial and Whigish in their private sentiments).

While thick with historical data, and very well referenced and supported, this work nonetheless manages to be not only an easy, but a positively enjoyable, read for the layman.

Daniel Putman
5.0 out of 5 stars Living history well beyond Paul Revere
Reviewed in the United States on February 17, 2016
Verified Purchase
The title of this book is unfortunate because it hides the depth and scope of what the author has done. David Hackett Fischer has brought to life an episode in American history that for most Americans is simply a name. I am not talking about Paul Revere’s ride but the Battle of Lexington-Concord. The book focuses on Revere’s life prior to the Revolution and somewhat on British General Gates but is so much more. One of Fischer’s goals is to show how the contingencies of history – a small event here, a miscommunication there – lead to events that have worldwide and time-spanning significance. He accomplishes that goal extremely well.

The details are impressive and insightful. Besides having a great deal of new information about Revere himself, Fischer has gathered information about all the other characters that I knew only by name if at all. This is not about the big names like Sam Adams and John Hancock but about individual militia members – their lives and the background leading up to the battle. Fischer’s use of letters is superb. He brings these people to life in a way I have never seen. But, remarkably, he does the same for the British soldiers who are usually nothing but place holders in the historical myths and legends. They become real people with their own fears, loves, problems and frustrations. When Lexington-Concord occurs about 60% of the way through the text, the men killed and injured are real human beings on BOTH sides. Fischer gives us their personal histories and portrays both the British and the Americans so empathetically that the battle in some ways becomes for the reader a true tragedy. It remains a show of incredible bravery and a rallying point for American freedom but it also becomes a great example of young men’s lives being blown apart by the vagaries of war and, for the British soldiers, by misjudgment and miscommunication at the top. Fischer gives incredible images, again supported by documentation, of American householders fighting British Regulars on their doorstep and dying to protect their homes and families. He shows the ability, almost impossible to believe, of American militia leaders organizing large numbers of individuals from different villages who were never used to being organized on such a large scale and against deadly fire. Fischer clearly shows that much of what we know about Paul Revere’s Ride is embellished legend but he also shows beyond doubt that the Battle of Lexington-Concord was not just a bunch of individual marksmen behind stone walls shooting at marching British troops. The organization of the Americans, as well as the ferocity of individual skirmishes, was completely new to me. This is an essential read for anyone who wants to understand in depth the first battle of the Revolution in terms of strategy, organization, and the human cost involved.

Fischer’s actual description of Lexington-Concord is utterly gripping. Fischer writes in a fluid easy-to-read style that keeps the reader intensely interested in the flow of events. It is an excellent war novel in the last 100 pages of the book except that it really happened. I never expected this when I first saw the book. Revere’s ride was not just one but many and it was definitely not only Revere who rode. But as impressive as Revere’s dedication and courage were, it is all a preamble to the incredibly human story of Lexington-Concord that Fischer brings to life. I recommend this book in the strongest terms. It is living American history at its best.
Read more
36 people found this helpful
Helpful
Report abuse

Radio Ross
5.0 out of 5 stars History as ti REALLY was.
Reviewed in the United States on July 9, 2016
Verified Purchase
Be prepared to have everything you've known about Paul Revere turned on its ear. David Fischer has done an amazing amount of research - digging into the distant past and retrieving bits of information from arcane sources. All sources in this book are well documented so there are no suppositions. If you "know" Revere only through the Longfellow Poem you will have your eyes opened. In Fischer's telling, Revere was less than what the poem described but far more than even Longfellow imagined. I will not spoil the story for you but I will say that Revere and his countrymen are much better described, and their deeds detailed, in this work than any fanciful stories you may have heard. These were desperate times and the people of New England, wishing to be free of the control of Old England and it's king, more than rose to the occasion. This story tells of the beginnings of the American Revolution and well documents, with a particularly balanced view, the beginnings of that struggle. If you value American history this is a must-read tome. It provides well documented clarification to a subject to which most of us have only had only apocryphal exposure.
Read and have your mind opened.
Read more
20 people found this helpful
Helpful
Report abuse
See all reviews

Glenn
5.0 out of 5 stars A story that must be told, re-told and told again
Reviewed in the United Kingdom on July 23, 2020
Verified Purchase
The bravery of those who led the charge in freeing the US from British rule is a story that shold be told in a blockbuster Hollywood film. However, as it would be flattering to those who fought for freedom, it will never be made.
Read more
One person found this helpful
Report abuse

t gates
4.0 out of 5 stars Four Stars
Reviewed in the United Kingdom on June 18, 2016
Verified Purchase
I enjoyed this book,a good source for anybody interested in US history.
Read more
Report abuse

Amazon Customer
5.0 out of 5 stars Great book loved it
Reviewed in Canada on December 29, 2016
Verified Purchase
I would guess that writing historic novels has many challenges. Least of which is the burden on the author to make the story as captivating as possible even when the outcome of the event being described is already well understood by the reader. A rare skill indeed. David McCullough ( Washington, Adams, Truman, The Path Between the Seas .. many others ) has that rare talent. Paul Revere's Ride was by first book by David Hackett Fischer and I was - in McCullough fashion - drawn into the story. I heard about the book on a You Tube Newt Gingrich video addressing the NRA on a well worn topic - the Second Amendment. Gingrich described in rich detail the challenges that faced the 'Rebel Army' in facing down the British and the importance of having arms to engage the Regulars. During that speech, he mentioned Paul Revere's Ride by David Hackett Fischer as providing even more detail on the famous post rider from Boston and his historic midnight ride to alarm Lexington and Concord that the Regulars were on the march to confiscate the gun powder stored by the Rebel army. At the outset I though that the scope of the book would be a bit narrow and wondered how the author could possibly expand one event - albeit a significant event , that in effect started the American War of
Independence - into a whole book. Boy was I wrong! The numerous events and characters on both sides are brought to life in vivid details .. and the event is expanded into the macro level that now allows the reader to see the intricate details unfold that makes this a story of epic proportions. Great book loved it ..
Read more
Report abuse

Polee Katharee
3.0 out of 5 stars Three Stars
Reviewed in the United Kingdom on June 16, 2016
Verified Purchase
Not what I expected this true story to be
Read more
Report abuse
See all reviews
Back to top
Get to Know Us
Make Money with Us
Amazon Payment Products
Let Us Help You
EnglishChoose a language for shopping. United StatesChoose a country/region for shopping.
© 1996-2022, Amazon.com, Inc. or its affiliates