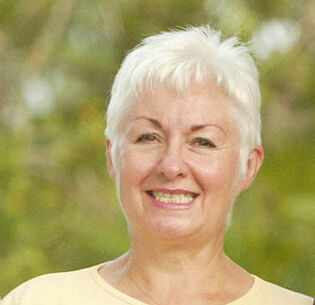 Pauline Hayton hails from the north east of England. She worked as a probation officer in her hometown of Middlesbrough before immigrating to the United States in 1991. She and her husband currently live in Naples, Florida with four abandoned cats who adopted them. She figures there must be a sign at the end of her drive that says two mugs live here.

She never, ever wanted to be a writer. It was not on her bucket list. Nevertheless, she started writing in 1996, after listening to her father's war stories and reading his tattered wartime diaries. She found them so interesting, she felt compelled to write them down for her grandchildren who had only ever known their grandfather as a doddering old man. The project turned into her first book, her father's war memoir, "A Corporal's War: the WWII Adventures of a Royal Engineer."

Researching for this book, she discovered the true WWII story of a remarkable woman, Ursula Graham Bower and wrote "Naga Queen" which is based mainly on the letters Ursula wrote home to her mother when she was living with the Naga tribes doing anthropological work. When the British Army discovered her, they recruited her into a clandestine unit to spy on the Japanese. She received a medal for her activities. While researching "Naga Queen" Hayton became friends with Ursula's daughter through whom Hayton became involved in bettering the lives of the Naga tribes in northeast India. This also led to a new book, "Chasing Brenda",(since renamed "Grandma Rambo") a lighthearted adventure in Nagaland, written after the author visited Magulong village, where she and her husband support a school, at a time when there was rebel activity in the area.

"Myanmar:In my Father's Footsteps. A Journey of Rebirth and Remembrance" is a travelogue of a trip taken in 2006. After surviving two battles with cancer, Hayton wanted to celebrate being alive and decided to visit the places where her father fought the Japanese in Burma during WWII. It was a healing, life-changing journey for her.

Her book "If You Love Me, Kill Me", a funny, sad and intense story, is based on the author's painful, personal experiences while caring for her elderly parents.

The author published her memoir "Still Pedaling" in 2015, with the hope that anyone facing hardships and challenges can lessen their pain by recognizing how a greater power is on hand, bringing help and support.

In 2016, Hayton published "Extreme Delight" an anthology of short true and fictional stories and poems, as well as her first children's book "The Unfriendly Bee."

"No Long Goodbyes" published 2019 is romantic fiction set in the 1942 Japanese invasion of Burma. This is the third book in a series to bring attention to a neglected part of WWII, the China/Burma/Indian theater of war, otherwise known as CBI. Hayton had not planned to write a romance, but the characters had other ideas. Everything that happened to heroine Kate, happened to refugees fleeing the invading force. More than half a million people walked out of Burma to India. It is estimated that between 20,000 to 100,000 died. Nobody has the correct figures. This book is my salute to those brave souls.

It's amazing when you are shown that you are on the right path in your writing. My first sale of "No Long Goodbyes" came almost by accident. I was introduced to a man whose friend fled on foot from Burma in 1942. He bought the book to give to this friend for his 93rd birthday.

My other two books that honor the forgotten army in CBI are "A Corporal's War" and "Naga Queen."

I recently published two short stories as ebooks: A love story "On Pilots' Wings" and a murder story "When the Bough Breaks."

Having changed the title of "Chasing Brenda" to "Grandma Rambo" I followed this with turning "Grandma Rambo" into a podcast that can be listened to like a radio play for free on any podcast provider. There is also a puzzle available through Amazon which you can do while you listen to the twelve episodes. The possiblity of "Grandma Rambo" being made into a movie looms.

While I continue to pound my keyboard, I wish you happy and enjoyable reading. 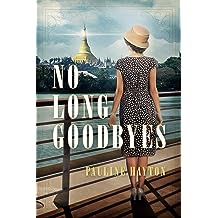 No Long Goodbyes Jun 1, 2019
by Pauline Hayton
( 3 )
$2.99
Wracked with guilt over the tragic deaths of her husband and young son, Kate Cavanagh leaves 1939 Britain to start a new life in Burma, where she falls in love and marries teak plantation manager Jack Bellamy, a widower with two young children.
The 1942 Japanese invasion destroys their idyllic life in Burma. With Jack away fighting the enemy, Kate must embark on a perilous 250-mile journey, on foot, with her children and their Indian ayah. They brave monsoon-sodden jungle, swamps and mountains along with half-a-million terrified, civilian refugees fleeing to the safety of India. Death from disease, exhaustion, and starvation surrounds them. Corpses litter the trail. Vowing not to lose another child in her care, Kate needs every ounce of courage and determination she can muster. Will it be enough to ensure their survival through some of the world’s most inhospitable terrain? 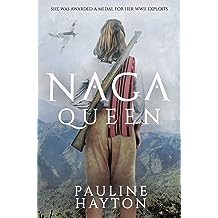 Naga Queen: She earned a medal for her WWII activities Sep 30, 2018
by Pauline Hayton
( 11 )
$4.99
In late 1930s Britain, a young woman yearns for the exciting adventures that seem to be reserved exclusively for men. “Come visit me in India,” her friend Alexa writes, and Ursula Graham Bower does, unaware that Assam is where her dreams will come true.

Flouting convention, she goes to live in the jungle-clad hills with reformed headhunters, the Zemi Nagas, where she finds fulfillment and a sense of purpose by recording their culture and providing much needed medical care. Her attempts to reconcile the distrustful Zemi with the British authorities are unsuccessful, until the 1942 Japanese invasion of Burma becomes the catalyst to heal the breach.

The British Army recruits her into “V” Force as a guerilla. Leading a band of Naga scouts and a platoon of soldiers, she watches the border areas. The Japanese invade India and, with British lines twenty miles behind her, the danger increases. Fearing the authorities will make her leave if they contact her, and that the Nagas will fold if she goes, Ursula signals H.Q.: “Going forward to find the enemy. Send more rifles.” The Nagas remain loyal in the most dangerous circumstances, even being prepared to die with her. They put their trust in Ursula and the authorities and the authorities trust them, and they do not fail each other. The Zemi suspicion of the British Government dissolves.

As the war moves into Burma, Ursula receives the Order of the British Empire Medal for her exploits. Lt. Colonel Betts, a “V” Force officer intrigued by the idea of a woman guerilla and seeking an unconventional wife, schemes to meet Ursula. She marries him, having found a man who loves her for living life on her own terms
Read more
Other Formats: Paperback 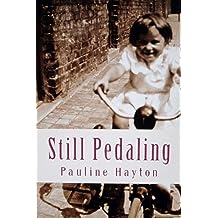 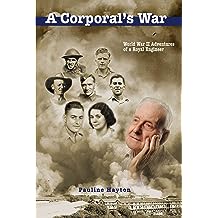 A Corporal's War: The WWII Adventures of a Royal Engineer Sep 30, 2018
by Pauline Hayton
( 3 )
$3.99
It’s 1939. Life is about to change for twenty-year-old Norman. Britain’s declaration of war against Nazi Germany brings unimagined opportunities for this working-class lad from northeast England. Conscripted into the army for seven years, he learns to drive everything but tanks. He blows up bridges, practices using poison gases, becomes a whizz with a rifle, sails the seas in a troop ship and makes his first flight ever in a plane.

After surviving Dunkirk by the skin of his teeth and building defenses to foil Germany’s expected invasion of Britain, the thanks he gets is a five-year posting to India and Burma—and a five-year separation from his wife and child. Heartbroken, he recalls his dad’s counsel: “You may pass that way only once. Learn what you can from the people and their cultures. Don’t waste time wishing you were back home because if you do, you’ll regret not making the most of your opportunities while you were away.’”

Did Norman follow his dad’s advice? Here’s a clue. When the family learns about his wartime adventures, they rename him Indiana Jones.
Read more
Other Formats: Paperback 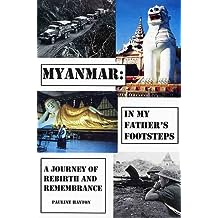 Myanmar: In my Father's Footsteps. A Journey of Rebirth and Remembrance. Aug 11, 2011
by Pauline Hayton
$2.99
Emotionally drained and physically depleted from aggressive cancer treatments, Pauline Hayton desires to once again feel really alive. Her solution is an adventure in Myanmar, formally known as Burma. She takes along her husband Peter, and a film crew, students from Boston University, to capture her travels on film to help her grandchildren remember her should she develop further cancers and die, as expected, from the harsh radiation treatments. She explores remote regions where tourists rarely go and travels the famous Ledo road, visiting the places where her father participated in The Burma Campaign, as a Royal Engineer in Britain’s Fourteenth Army. Hayton’s jaunt in Myanmar, in search of lightness and fun, turns into a journey of self-healing and of remembrance of Fourteenth Army soldiers who suffered tremendous hardship as they fought to retake Burma from the Japanese.
Read more
Other Formats: Paperback 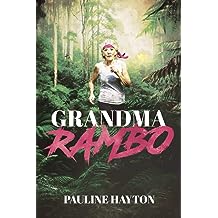 Grandma Rambo Nov 4, 2018
by Pauline Hayton
( 1 )
$2.99
Her sixtieth birthday, her self-centered husband, and the death of a friend have Brenda wondering what happened to her once adventurous spirit. Determined to get it back, she hotfoots it to a remote village in India.Family members give chase to persuade her to come home and life becomes hectic. When Brenda’s ditzy granddaughters arrive in India, rebels promptly kidnap them. With the police no help and her dander up, Brenda turns into “Wonder Woman” on a mission, embarking on a hare-brained scheme to rescue “her girls.” Her showdown with the maniacal rebel leader has Brenda fearing for her life and the lives of her granddaughters. Calling him a moron doesn’t help. Against all odds, she outwits the rebels. Using implements hidden in her bra, Brenda escapes with the girls under cover of night.Traipsing through jungle, dodging rebels and bullets, and fleeing angry bears—no problem for the wild child in Brenda that was there all along.
Read more
Other Formats: Paperback 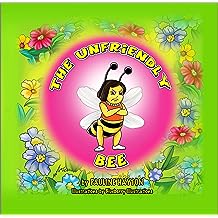 The Unfriendly Bee Oct 11, 2018
by Pauline Hayton, Blueberry Illustrators
$2.99
Beryl, the unfriendly bee, chases other bees away from flowers that have the most pollen.

“Get off this flower!” “Get lost! This flower is mine!” she shouts.

Beryl doesn’t care if she has no friends. She wants to win Queen-Bee’s merit badge for collecting the most pollen for the hive.

The other bees are annoyed and teach Beryl a lesson―that life is much better if you are a friendly bee. 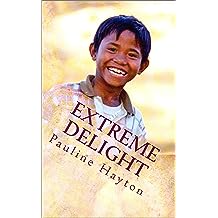 EXTREME DELIGHT: and Other Strories Feb 5, 2017
by Pauline Hayton
$1.50
An eclectic collection of writings the author has produced over the years: stories of real events relating to her worldwide travels and battles with cancer, fictional stories, poetry, magazine articles, toastmaster speeches --a mixture of everything in no particular order.
Read more
Other Formats: Paperback 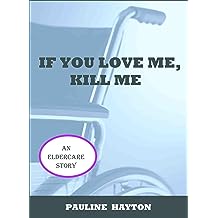 If You Love Me, Kill Me Apr 26, 2013
by Pauline Hayton
( 9 )
$2.99
When Pauline brings her eighty-three-year-old parents from England to America to care for them, she little realizes the hardships she endures will bring her to the brink of madness, murder and suicide.
Read more
Other Formats: Paperback