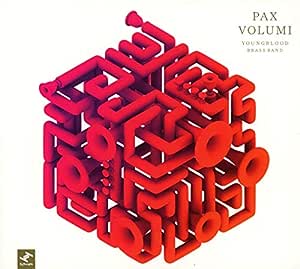 Youngblood Brass Band are a unique proposition; focused on creating consistently progressive, groundbreaking acoustic music, and employing whatever sonic means necessary to do so, the nine-piece ensemble marks the point at which the worlds and sounds of punk, brass band, hip hop and improv jazz collide. Youngblood assembled in the 90s and have been unleashing their energetic and inspiring shows on the worldwide stage since 2000. Although the band was originally formed by high school friends in Wisconsin, the line-up now comprises players from all over America (Madison, New Orleans, New York, Nashville, Minneapolis, Chicago).

Although not based in New Orleans, Youngblood have long been in thrall to the music of that city and have made countless visits to learn and immerse themselves in the serious business of the craft. They were initially introduced to Tru Thoughts A&R Robert Luis by Bennie Pete of Hot 8 Brass Band, a group with whom they have built a kinship over the years.

MRN
5.0 out of 5 stars Youngblood matures into its niche
Reviewed in the United States on September 10, 2013
Verified Purchase
Youngblood Brass Band has defined its sound by taking the vehicle of a traditional New Orleans brass ensemble, filling it up with rocket fuel, and burning tracks with a flair in spoken word, rock, punk, experimentation, and angst that just isn't accessible to the conventional New Orleans style. While some of their contemporaries are also pushing the boundaries of the New Orleans sound, no one is doing it like Youngblood.

Whereas some of their earlier albums straddled elements of more traditional styles, Pax Volumi shows the band confidently pursuing their own inspiration. This shows most in the fuzzy, deep bass prominent in "20 Questions" which persists through most of the tracks; the overall feel of album is grittier and edgier, while still sticking to the tight ensemble flourishes of their previous work. Most notably, the lyricist has reached his full stride here; some of their previous tracks felt fragmented between the band doing their thing, and the lyricist doing his--here the two play against each other without halting, for a much more powerful effect.

If you're a Youngblood veteran, you're bound to love the changes in Pax Volumi. If you're new to Youngblood from a New Orleans brass band interest, you might prefer Center:Level:Roar for a first taste, and then promptly graduate to this album. If you're coming from a rap interest, this album (or Unlearn for the guest artists) might be your best start on the band.

Wade Burch
5.0 out of 5 stars Brilliant
Reviewed in the United States on October 25, 2013
Verified Purchase
This album is brilliant. The first part of the album leans pretty on the rap side. Not as aggressive stylistically "Is That a Riot?" which is fine by me. I think the rhymes are much tighter and balanced this time around. I do miss the amazing Sousaphone action from the first couple of albums. Pax has more syth on the low end. Still a great sound though. The rest of the album is instrumental. The rendition of "Old Rugged Cross" was so slow I didn't recognize at first listen, now it's one of my favorite tracks.

All told I think this album is a solid buy. There are a smattering of hard hip hop tracks for the "Is That a Riot?" lovers. The rest of the album reminds me of some of the classic tracks from Unlearn. Either way you will want to turn it up loud and nod to the beat.

C. Dubuque
5.0 out of 5 stars Another great album by Youngblood Brass Band
Reviewed in the United States on May 24, 2014
Verified Purchase
While I am biased as a Youngblood fan, this album does not disappoint. Full of beats to move your feet, intelligent lyrics by David, and -oh yeah- Nat is back. There are some instrumental songs in here, too, including the traditional "The rugged cross/His eye is on the sparrow" which starts as a dirge and builds in power.

Listen to them all. Definitely worth the purchase. Oh, and if you get the chance to see YBB on tour, you won't be disappointed.
Read more
Helpful
Comment Report abuse

David Rose
5.0 out of 5 stars This album is ridiculously good
Reviewed in the United States on September 30, 2013
Verified Purchase
There isn't much else to say. YBB has really come into their own and what they have is great. Everything from the lyrics to the brass hits, from the drums to the overall sound quality is superb. I've been listening to their albums for a while, but this one is by far my favorite. Just wish they would play somewhere close by so I could hear them live...
Read more
One person found this helpful
Helpful
Comment Report abuse

Dan
5.0 out of 5 stars New Favorite Album
Reviewed in the United States on August 6, 2015
Recently Youngblood Brass Band used the term "Riot Jazz" to describe the genre of music that they play. Right out of the gate in "20 Questions" that sound is conveyed with blasting horns, crowd stirring lyrics, street style drumming and a call-response chorus.

"Whiskey Tango Foxtrot" is a hip hop style track with plenty of social commentary about the state of US culture, economics, politics and music. There even is a stylized allusion to what sounds like dubsteb ("is it weird enough..."). The reference is fitting, when considering the band's similar jarring yet melodic sounds and rhythms. Lyrically, the song shines as it cleverly flows through the phonetic alphabet. Enjoy following along and decoding it without looking up the lyrics to account for all the letters.

Overall the album delivers high energy, in-your-face brass music. You'll have a hard time figuring out whether you like the trumpets, trombones or saxophones most. They all seem to take center stage giving it all they can with a solo or flourish and then fall back as the other instruments take the spotlight. All the while, the drums and tuba keep the beat strong and moving forward. The tracks that feature the MC have educated wordplay and flow that requires repeated listening to fully appreciate.

This album is highly recommended to people who like energetic music from all genres: Brass, Hip hop, Jazz, Afro-Cuban, and Alt Rock. If you don't have a sweet spot in your heart for brass (and technically for some woodwind) you can skip this album. Otherwise, get some good speakers or headphones and enjoy the many layers of Pax Volumi.
Read more
Helpful
Comment Report abuse
See all reviews

Bobby
2.0 out of 5 stars Two Stars
Reviewed in the United Kingdom on August 17, 2014
Verified Purchase
Disappointing. Not a patch on is this a riot
Read more
Report abuse