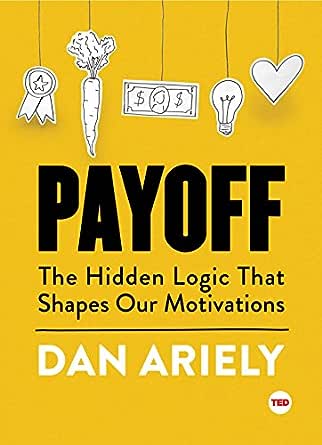 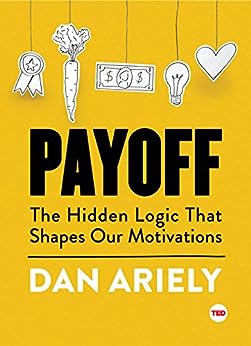 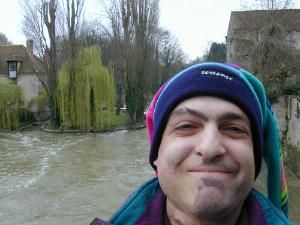 Enjoy a great reading experience when you buy the Kindle edition of this book. Learn more about Great on Kindle, available in select categories.
Read more Read less
click to open popover
Books In This Bundle (3 Books Total)
Page 1 of 1Start OverPage 1 of 1
Previous page
Next page

Dan Ariely, James B. Duke Professor of Psychology and Behavioral Economics at Duke University, is a founding member of the Center for Advanced Hindsight. He is the author of Payoff and the New York Times bestsellers Predictably Irrational, The Upside of Irrationality, and The Honest Truth About Dishonesty.

‘A quirky exploration of the mysteries behind human motivation . . . Ariely writes in an approachable, chipper style . . . A mostly provocative account of how inner turmoil drives us.’
(Kirkus Reviews)

‘A surprisingly empathetic and practical volume, behavioral economist Dan Ariely’s slim, 100 page primer on motivation will be the book you wish your boss had read.’
(Fortune Magazine)

‘[A] short and fascinating account of what motivates people at work and in every other aspect of their lives  . . . An insightful read for leaders who want to know how to get the best out of everyone around them.’ (BizEd)

' "Too many managers believe people are motivated by money", Ariely says ... "Gratitude and compliments are better motivators", Ariely says...This is all true, and characteristically engagingly written.'  (Financial Times)

How to Destroy Motivation, or: Work as a Prison Movie

Why it’s astonishingly easy to demotivate someone


Life is never made unbearable by circumstances, but only by lack of meaning and purpose.

A few years ago, I was invited to speak about the topic of decision making to a group of a few hundred engineers at a big Seattle-based software firm. During the years before I met them, the mandate for this carefully recruited, experienced, and brainy bunch had been to create something fabulously innovative that would become the next big thing for this staid software company.

The engineers dove into the challenge with enthusiasm. They conducted tons of research. They built an almost-working prototype. They were all proud of their work, having spent long hours—including evenings and weekends away from their families—to make this awesome thing happen. They believed their invention would transform their company and make it the innovation giant it should have been.

After a short introduction, I started talking about some research that I was working on. I began by describing a set of experiments that Emir Kamenica (a professor at the University of Chicago), Drazen Prelec (a professor at MIT), and I had carried out—studies that unexpectedly resonated with the engineers.4

In these experiments, we asked participants to build some Lego Bionicles. These are marvelously weird Lego creatures that kids can creatively assemble in many different ways. We picked Bionicles as the object of our investigation because the joy of Lego is almost universal across cultures and ages, and because building with them resembles, at least conceptually, the creative process that is so central to innovation in the workplace.

After these participants assembled their first Bionicle, we placed their completed creations under the table for later disassembly. We then asked: “Would you like to build another one, this time for eleven cents less, for $1.89?” If the person said yes, we gave him another one, and when they finished that one, we asked, “Do you want to build another?” this time for $1.78, another for $1.67, and so on. At some point, the participants said, “No more. It’s not worth it for me.” On average, participants in this condition built eleven Bionicles for a total take-home pay of a bit more than $14.

The participants in the second condition were promised the same amount of money per Bionicle, so they had the same financial incentive. But this time, as soon as they finished building a Bionicle and started working on the next one, we began disassembling their completed Bionicle. Right before their eyes. Once we finished undoing their work, we placed the parts back in the box.

The first group built their Bionicles in what we called the “meaningful” condition, so called because they were allowed to feel that they had completed their work satisfactorily. We called the second condition the “Sisyphic” condition—named after the ancient Greek story about Sisyphus, who was condemned by the gods to roll a boulder up a hill only to have it roll down again and again for eternity. Those in the Sisyphic condition managed to build an average of seven Bionicles—four fewer than those in the “meaningful” condition.

As I described this experiment to the engineers, I added that we also looked at individual differences in terms of Lego love. Some people are naturally enthusiastic about building Bionicles, while others not so much. We wanted to see how this individual difference translated to productivity. In the meaningful condition, some participants were unenthusiastic about making Bionicles, so they made fewer of them. In contrast, those who loved making these creations were happy to assemble them for relatively small amounts of money. Basically, people who loved the task kept on going because they enjoyed the process and found meaning in it. (Of course, we weren’t talking about Meaning with a capital M. These folks weren’t curing cancer or building bridges; they were building plastic toys, and they understood that their creatures would be taken apart quite soon.)

But here’s what was so interesting: In the Sisyphic condition, we discovered that there was no relationship between the internal joy of making Bionicles and productivity. Those who weren’t terribly excited about Bionicles created about seven of them—the same number as those who loved building them. In general, we should expect that those who love Bionicles would build more of them, but by dismantling their creations right before their eyes, we crushed any joy that the Bionicle-loving participants could get out of this otherwise fun activity.

As I was describing these results, one of the chief engineers stopped me. “We completely understand the experiment you’re talking about,” he said, “because we’ve all just been part of the Sisyphic condition.”

They all nodded in sorrowful agreement. The chief engineer continued talking. “Last week, our CEO told us that our project was canceled, that the whole initiative was going to be scrapped, and that soon we would be assigned to other projects.”

Up to that point, I had wondered why the people sitting in front of me were so lethargic and depressed. Now I understood.

“Your situation,” I told them, “is also the way that some movies depict breaking the spirit of prisoners. Does anyone here remember the famous prison-yard scene from the movie The Last Castle?”

Several people nodded. In the movie, Robert Redford plays the role of Eugene Irwin, a court-martialed three-star lieutenant general who is sentenced to ten years in prison. Soon after he is imprisoned, he challenges the warden over the bad treatment of prisoners and is punished for insubordination. His punishment is to move enormous rocks from one side of the prison yard to another. The task is so daunting that many of the prisoners think he will pass out before finishing; others cheer him on. After hours of back-breaking work, Irwin manages a final push of energy. He pulls up the last huge rock, carries it across the yard, and drops it triumphantly onto the pile. The prisoners go wild. It looks like a happy ending—until a few seconds later when the warden tells the prisoner he’s not finished with the job and orders him to put the rocks back. --This text refers to an alternate kindle_edition edition.
Read more