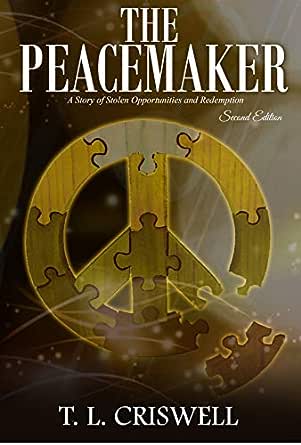 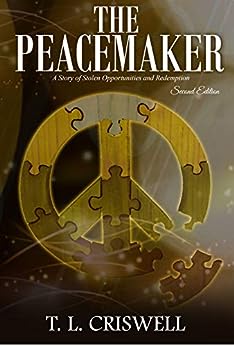 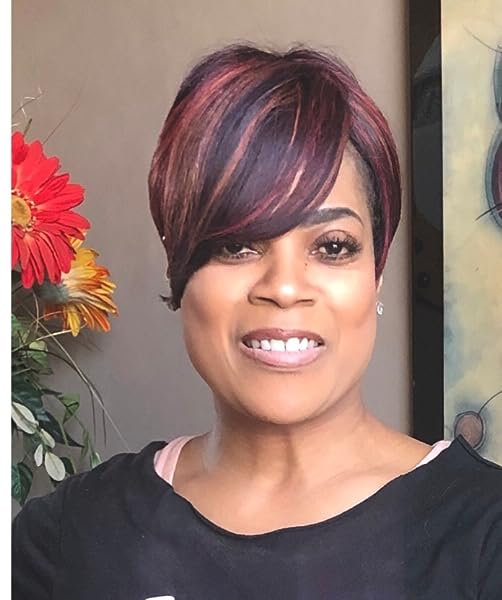 The Peacemaker: A story of stolen opportunities and Redemption Kindle Edition

4.6 out of 5 stars
4.6 out of 5
74 customer ratings
How does Amazon calculate star ratings?
Amazon calculates a product’s star ratings based on a machine learned model instead of a raw data average. The model takes into account factors including the age of a rating, whether the ratings are from verified purchasers, and factors that establish reviewer trustworthiness.

avidreader
5.0 out of 5 stars Wow
Reviewed in the United States on March 10, 2018
Verified Purchase
I start a book with no expectations and just enjoy the story. This one however, was different. I fell into it and didn’t even think about anything else! The power of love, redemption and even karma woven throughout the story is what made it so powerful to me!

I believe that once you read this book, The Peacemaker will be on your top ten list of one of the best reads of all times!
Read more
2 people found this helpful
Helpful
Comment Report abuse

Reading for the soul
2.0 out of 5 stars Indie Review...
Reviewed in the United States on November 19, 2012
Verified Purchase
Two years ago, Jayson Lee Jackson II was a fifteen-year-old Detroit youth arrested for the shooting of his best and oldest friend, Michael Stephens. Making matters worse was the fact that Michael, a sports star, had recently won a four-year basketball scholarship to Michigan State. Although he claimed it was an accident, Jay was sentenced to juvenile detention. Now that his sentence is up for review, Jay could be looking at hard time unless he gives the judge a reason for her to rule otherwise.

On this most important of days, Jay thinks back on his early life, his friendship with Michael, and all that led to that fateful day two years ago. We learn of the fractious relationship between Jay’s parents, Jackie and the Big Man. And we see Jay growing up surrounded by violence and temptations that make Nana, the grandmother who is raising him, fear that he might never make it past his teenage years. Raised under similar circumstances, Michael tends to walk the straight and narrow whereas Jay falls in with a bad crew. What pushes him over the top is his discovery of the dark secret that lies at the heart of his parents’ relationship.

The author has written a novel full of good intentions. The biggest problem with the story is the fact that, as a character, Michael is a little too saintly to believed. Perhaps this is necessary to put Jay’s flaws in greater relief, but did the author really have to make the basketball phenom such an unalloyed paragon of virtue? Awash in sentiment, the story’s overabundance of sincerity threatens to smother the characters and their relationships. Although reminiscent of such modern classics as Louise Meriwether’s Daddy Was a Number Runner, this YA novel unfortunately takes contemporary inner-city problems and reduces them to the level of a clumsily executed TV afternoon special.

Reviewed by Kenneth Salikof for IndieReader

YA Librarian
5.0 out of 5 stars A YA Must Read
Reviewed in the United States on January 10, 2013
Verified Purchase
Criswells' literary debut is the best young adult offering of the decade! This writer takes us through the emotional progression of young Jayson Jackson as he emerges from juvenile delinquency to societal responsibility delivering a tumultuous hard knock that propelled the transition. This book is will bring you to tears as you share with Jayson the passions of the guilt that will forever be a part of his life. Kudos to Criswell for such an thought provoking contribution to our young readers!
Read more
5 people found this helpful
Helpful
Comment Report abuse

Bossladyyo
5.0 out of 5 stars TL Criswell
Reviewed in the United States on November 21, 2012
Verified Purchase
This book is a definite must read. I enjoyed it thoroughly; there were times where I had to put it down but didn't want to. This book brought tears to my eyes, it made me think of my son who could've gone down the wrong path. It also made me think was I being the best parent I could be. As parents we lead by example and our kids look up to us whether we are Right, Wrong or indifferent. I'm just in aw on the many important key points this book touched on. Congrats and Big ups to you TL Criswell; Gods hands were ALL over you.

Ltease
5.0 out of 5 stars AWESOME
Reviewed in the United States on April 24, 2013
Verified Purchase
The is a must read I could'nt put it down. I read it through my 12 hour shift. I cried, I laughed and could totally relate to what the author wrote. I "LOVE IT" so much that I've made arraignments to have copies sent to the prisons that minister to young juveniles that is troubled but has not made it to prison yet. The book is an useful tool in helping our young folks became productive citizens and keep our young men free and together with their family. May GOD continue to bless you and I am waiting for the next book.
Read more
Helpful
Comment Report abuse

puddin
5.0 out of 5 stars riveting
Reviewed in the United States on January 18, 2013
Verified Purchase
This was a very well thought out book by the author Mrs Criswell. Something relatedable to just about anyone who is raising a male child or who has raised a male child. Very captivating and well written. Cant wait for the next book. Please dont change your style Mrs Criswell.
Read more
Helpful
Comment Report abuse

Amazon Customer
5.0 out of 5 stars This one will keep you guessing!!
Reviewed in the United States on August 18, 2013
Verified Purchase
This is a great suspenseful quick read. Anyone that has a son, nephew, or mentors a young man needs to read this and then bless them with this book. This is a powerful story about the choices that most young men are faced with on a daily basis. Should they do the right thing or take a chance by getting a quick fix.

T.L. keeps you guessing throughout the whole story by intertwining the lives of two young men. This is a fictional story with so many true elements. Most young men are faced with this predicament at sometime in their lives. I recommend that everyone read this book. It will help you deal with and connect to young men of any race!
Read more
Helpful
Comment Report abuse

Dbrink
5.0 out of 5 stars Must Read !!!
Reviewed in the United States on May 31, 2016
Verified Purchase
This book exceeded my expectations . The book was so good I literally read it in one night. T.L. Criswell captured me from the beginning to the end. She left me wanting more. Looking forward to reading more of her books.
Read more
Helpful
Comment Report abuse
See all reviews from the United States