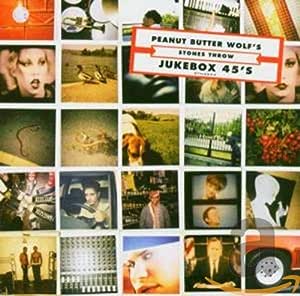 This compilation from DJ, producer, and Stones Throw label honcho Peanut Butter Wolf succeeds on several levels. As a collection of his label's 7-inch singles, it allows digital collectors to cop what had only been available to vinylheads. But more than that, Jukebox 45's serves as an introduction to and celebration of the Stones Throw ethos, an amazing sampling of the indie label's envelope-pushing hip-hop, experimental soul, and old-school funk. Madlib, the "star" of the Stones Throw stable, is well-represented across these 22 tracks (as both rapper and producer), contributing to a variety of projects. There are also five rare-groove tracks dug up from the late 1960s and early 1970s that fit rather nicely next to the original material. Kudos to PBW and Stones Throw Records for this nasty set--and for all their innovative, rump-shaking, head-spinning music. --Marc Greilsamer

JBug
5.0 out of 5 stars Great collection of 45 rpm music brought to the modern world
Reviewed in the United States on August 15, 2011
Verified Purchase
I can't get enough of what the Peanut Butter Wolf brings to my ears. As one of the premier music diggers of our generation, he brings the forgotten (even older than old school) back to our ears with this robust collection of artists. For the money, I don't know if I've purchased a better cd.
Read more
Helpful
Comment Report abuse

fetish_2000
5.0 out of 5 stars One of 'Stone Throws' most criminally overlooked Releases....
Reviewed in the United States on October 27, 2005
The 'Stones Throw' label, has now become something of a label with a emphasis on 'Quality over Quantity'. With the majority of the releases snapped up by fans, due the consistent amount of superb releases emanating from the label. This is partly due to beat-constructor 'Madlib' providing the production for many of their Hip-Hop releases. But to not give kudos to label-head, and DJ 'Peanut Butter Wolf' would be foolish, as he has been the driving force, behind a lot of the releases, and compilations that the label has put out.

Here, he compiles an compilation of alternative rap, leftfield funk, freewheeling instrumentals, Psychedelic Soul, energetic breakbeats & rare-groove. Already a self confessed vinyl-junkie, he skillfully manages to produce a compilation that highlights a lot of the 'Stones Throw' roster, as well as some rare dusty 45's. And because the collection compiles such a diverse range of genres, (usually with a slightly weird / leftfield sound), this is anything but your usually Funk / Hip-Hop Compilation, and will be of most interest to those that love those rare/underground compilations, that compile hard to find / or little known / weird sounding tracks, into one tidy album.

"Madlib" features heavily throughout this compilation, (under various guises), and so he kicks things off with the superb beat-heavy instrumental "Chops and Thangs". his 'Quasimoto' alter-ego, gets an airing with his subtle remix of one of best leftfield Hip-Hop tracks "Microphone Mathematics". 'Dudley perkins' with the soft & Quirky Neo-Soul of "Flowers". 'Ernie and The Top Notes' stretch funk into interesting shapes with the sad, slow groove of "Things could be Better". Madlib pops up again on the next two tracks under his 'Yesterdays New Quintet' moniker, which is primarily a Jazz-Funk experiment, fused with Fender Rhodes keyboards, and drifting Hip-Hop beats, of which both tracks "Harlem River Drive Interlude" & "I Am Singing" both benefit. One of the more decidedly odd tracks on here, is 'Captain Funkaho's' shimmering tribute to the golden era of videogames (the 80's) with his bizarre hybrid track which is a homage to the 'Atari 2600' games consoles, with cheeky videogame sampling ahoy, (and rather oddly one of the best tracks here). The 'Beat Conductor' (aka Madlib) offers up a tight locked rhythm, with the rousing and dope beats that we've become used to with his work, with slight nods to, Experimental soul, and old-school funk, on the track "Breaks of Meditate". 'Stark Reality', is a band that is known to few, but what they become proficient and known for, were playing melodies, that in theory resembled children T.V. theme tunes, and blasting the melodies into submission with psychedelic acid-rock that is pummelled with fuzztone guitar. Strange, surreal a little unsettling, with their track "Rocket Ship", they deserved to better than fading into obscurity, but their music was a little too 'Out there' for mainstream consumption.

Live instrumental beat group 'Breakestra' who specialise in performing Live vintage soul, funk, and jazz breaks, hand in the uptempo funky grooves of "Getcho Soul Togetha, Pt 2", which is like a sublime compact selection of Deep Funk/soul & Revival packed into its 4 Min's playing time. (Seek out their albums if you don't have them already). Old-Skool Hip-Hop is aptly represented with the golden age rap of the late 'Charizma' & 'Peanut Butter Wolf's' - "Devotion' 92, with Charizma's confident and literate lyrical swagger, being the perfect accompaniment to Peanut Butter's excellent freewheeling and exuberant production. There are a couple of tremendous low profile tracks, mixed in-amongst these tracks. "Fabulous Soul's - Take Me", is a little heard rare-groove gem, that needs to be heard. Turntablist 'A-Trak' drops the superb sample heavy "Enter Ralph Wiggum", and along with "LA Carnival's - Color", make up some of the more obscure tracks on the disk. Madlib finishes out the disk, with the last 4 tracks, via his aliases, starting with the 'Beat Conductor's "Lost Lust" handling the Hip-Hop beat side of things, and 'Yesterdays New Quintet' perfectly balancing the superb fusion of Hip-Hop, Soul and Jazz, with the two tracks "mystic Brew Interlude" & "Knucklehead" (Which both seem to have been created especially for this compilation). And last but not least is a throwback to Madlib's early days, when he was part of the old-school revivalist rap Group 'Lootpack', who expertly combine exceptional Hip-Hop beat infused with great helps of Funk/Soul (courtesy of Madlib), and quick witted battle rhymes, calling into question 'wack Mcees'.

And so what you are left with is an exceptionally well put together compilation that has a little bit of everything in there, for those (like me) that like a fairly broad selection of genres, to listen to. Admittedly at least half the tracks here, have had Madlibs involvement somewhere down the line, but it's testament to his productions skills, that unless you knew otherwise, you'd be none the wiser. If you enjoy Stones Throw's exceptional "The Funky 16 Corners" funk compilation, then if you don't mind the inclusion of Hip-Hop/Soul/Beats making their way into the compilation, than this is as equally as worthwhile, as virtually anything the label has put out, and it's arguably the record I probaby return to most. I'm not saying it's their best release, it just that, such is the diversity in tracks, that it tends to combat overfamiliarity with the album. This is a release that is whole heartily recommended to anyone that loves the 'Stones Throw' Label, and anyone looking for something a little different (quirky??) in their compilations.

Kevin C. Wheeler
4.0 out of 5 stars Random Funk/Hip-Hop mix tape
Reviewed in the United States on March 23, 2003
I checked this one out after getting way into The Funky 16 Corners, which is a great mix of old-school funk tracks that most of us have never heard of.
This is not the same as that, but you can easily tell that some of the same people put it together. This does have some great old-school funk tracks, but it has more eclectic hip-hop that I can't put a specific genre on. Some of it's kind of out there. Like an instrumental cover of Stevie Wonder's "I am Singing," done with what sounds like a kid's keyboard. I don't love the whole thing, but there are some great tracks that you probably won't hear anywhere else, and it does make a great companion to "16 Corners."
Read more
2 people found this helpful
Helpful
Comment Report abuse
See all reviews