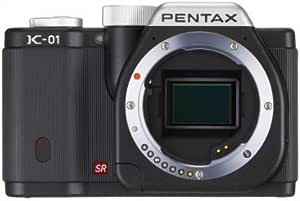 Brand: Pentax
4.2 out of 5 stars 64 ratings
| 23 answered questions
Available from these sellers.

any warranty is to be sought through the manufacturer. seller gives no warranty.

4.2 out of 5 stars
4.2 out of 5
64 global ratings
How are ratings calculated?
To calculate the overall star rating and percentage breakdown by star, we don’t use a simple average. Instead, our system considers things like how recent a review is and if the reviewer bought the item on Amazon. It also analyzes reviews to verify trustworthiness.
Top reviews

Amicus Curia
5.0 out of 5 stars Deflation in Action
Reviewed in the United States on August 1, 2012
Color: Body Only (Black)Verified Purchase
My strongest negative feeling is the price on this came down $15 since I ordered it 3 days ago. And yeah, it has no VF, but then neither does it have any mirror slap. It has the same excellent APS-C sensor it's big brother (K5) has and even better video mode selections PLUS it has focus peaking.

Despite all the carping, the body felt VERY comfortable in my big hands. The lens lock design for this body actually is sleeker and more ergonomic than the K5's. I'd purchased a Rokinon 85mm f1.4 prime a couple of years back, then buried it in my kit bag and pretty much forgot about it. When the K-01 arrived, I dug it out and slapped it on. WoW! A lens/body marriage made in Heaven. It felt perfect, the body and lens easily balanced with one another. The clarity and brightness in low light were a pleasant surprise. Unlike the K5, this body has Focus Peaking. It's not only a welcome backup for my K5, but has unique advantages in its own right.

The rubber cover for the SD/SDHC/SDXC memory card slot is a bit more meddlesome than the hard door/cover on the K5, but it does NOT 'flop' once you take the time to slide/secure it back in place. This body has an external stereo mike input, and UNLIKE the K5, it has audio level control. It also has a built in stereo mic and I think the K5's built in is mono, though its jack is stereo.

This unit may not be a spy's dream camera, but it should be any serious photographer's 'go to' camera for all around versatility and excellence at an unbelievable affordable price (currently). When I count up the advantage of being able to utilize my Pentax legacy/modern lenses, this thing just screams, "Buy me!"
Make no mistake, this is no toy. The dials and buttons feel solid, not cheap. I would have liked a longer neck strap in the retail package.

I almost forgot something other reviewers ignored, the popup flash mechanism feels very secure and well engineered--almost like a fine Swiss watch. I'd have liked weather proofing in this unit, but there's nothing 'cheap' about the feel. As for the rubber sides instead of solid cover, perhaps that provides a little extra protection against unexpected minor bumps. Don't be afraid of trying this camera, especially with something more than the kit pancake lens. Kudos to the designer and manufacturers of this quality tool.

ADDITIONAL THOUGHTS: Another bonus feature the K-01 offers which the big name brand reviewers have all apparently missed is, not only does this body's pop up flash FEEL refined and well engineered with PLENTY of critical thinking invested in the design--It IS! e.g. The K5's pop up flash was not available when the Rode Video Microphone (stereo) is mounted in the hot shoe. But the more thoughtfully designed K-01 allows a mic such as the Rode SVM to be mounted in the hot shoe AND allows the built in flash to operate simultaneously without having to remove the mic to allow for the built in flash. Given the instantaneous ability to switch (via the 'red' button) from single shots to video, this is a feature I doubt any other APS-C hybrid still/video camera of this quality on the market offers. Frankly, this camera's design is beginning to look like it's over some of its critics' heads.

BTW, the larger body some critics disparage compared to the petite mirrorless competitors likely doesn't overheat its chip & electronic circuitry as rapidly as its smaller P&S cousins. Another nice feature that's not mentioned in the reviews obsessing on the K-01's size/lines is it has not just interval timing for stills, but for video as well! That means you could set it up to catch a series of rush hour foot traffic, or any other anticipated regular event. This duckling is turning into a pretty elegant swan.

When the price on this dropped to 346 smackers on Amazon (free shipping! No tax), I couldn't resist buying a 2nd. At that price it's cheaper than many less endowed P&S cameras. At that price, they're GIVING this excellent photography tool away as though it were a lens accessory!

Enthusiast
5.0 out of 5 stars The Pentax K-01 is One Sweet Camera
Reviewed in the United States on May 22, 2015
Color: Body Only (Black)Verified Purchase
The Pentax K-01 is one sweet camera. My interest is in taking the best possible still photos at a price I can afford. Critics overlook what a superb design this is for using manual lenses. I use a compact, old Takumar f1.4, 50mm manual lens (of considerable fame) with a T-thread to K-mount adapter. In manual mode, the K-01 provides either manual or automatic exposure. A new focus-peaking feature outlines the scene in white lines at the exact point of manual focus, and the scene can be magnified for sensitivity. Thus the focus problem with manual lenses is completely solved. With a large APS-C sensor and an f1.4 lens, there is usually no noise, and I almost never need the flash.

The K-01 has the traditional high build quality of a Pentax. It is somewhat heavy and feels like a small brick. The 3" monitor is bright with high resolution, and hardly seems to discharge the battery. The monitor should be articulated, but is not. In common with critics, I regret the loss of an optical viewfinder. However the weight of the K-01 combined with its shake compensator always gives me a perfectly sharp picture. And without an optical viewfinder I do not need to be changing my glasses. RAW files that I always shoot, are simply edited and converted in-camera to JPEG before downloading. This helps a lot in my workflow. The K-01 is everything a camera should be in a mirror-less design that is free of the DSLR tradition.

I often try to buy "used, like new" equipment at Amazon, who define this as - in perfect condition in original box with all accessories. Then you get new-looking equipment at half price, though sellers sometimes do not notice the rule. My system cost $350. total, and this provides the still-photo performance of a new system costing over $1,000.
Read more
5 people found this helpful
Helpful
Comment Report abuse

Gaiking
4.0 out of 5 stars Solid body but, not for everyone.
Reviewed in the United States on April 1, 2013
Color: Body Only (Black)Verified Purchase
I purchased the Pentax K-01 to get back into photography and I figured this was a good choice as I had a few primes laying around from my K1000 days. Now let me say I'm not going to get into all the technical specs of the camera as that isn't what photography is all about and, while there will be a few specs, they will only fit to serve a point.

This camera is very unconventional in appearance and comes in multiple colors (I went boring and bought the black model, body only). This really is all about your personal choice here but, I actually think it looks very nice as far as cameras go.

Now the build quality is very high and the only issue I have is with the Rubber side cover and how flimsy it feels. Other than that, the metal body and switches are top notch even if the body isn't weatherproof.

This camera can really deliver solid images when coupled with decent glass and using the RAW image format. Digital noise is very low going way up into the ISO range, contrast and sharpness are also very good and there's a whole host of image settings in the camera, to give you just the look you wants.

Pentax could have jumped on board with all the other mirror less designs but, they remained loyal to their base instead and delivered a body without the mirror box but, left enough spacing and their normal lens mount in the body. This means every Pentax lens just works with this body, even without an adapter and I wish more of the other camera companies would take a page from this book.

Another area where Pentax remained loyal was the hotshoe. Several of the other companies decided to forgo the hotshoe altogether but, Pentax again remained loyal to their supporters and used the same hot shoe as their other DSLRs.

These are very big for those with lots of expensive Pentax gear and I have to give big props to Pentax for this.

The cameras metering system seemed very functional and pretty solid on accuracy. I found no major issues with blown highlights or excessively dark underexposed images. This is about as solid as any other in this class.

The auto focus seems to be fairly accurate and has decent consistency overall. However, it is a pretty slow system when comparing it to the leaders in this market segment. If you're in good lighting, you will get good results but, as the EV ranges drop so does the accuracy. This is the one area I expect Pentax to improve significantly in the next generation of this body.

The K-01 is a solid body for the money and if you have any investment in Pentax gear, this is no doubt, the mirror less body for you. If you're new to the world of Digital Interchangeable Lens cameras, then give it a good solid look and see if the body meets your needs. If you're on a budget, then this body is also a good choice for you. If you need speedy AF and faster than 3 fps shooting or you are invested in another systems glass, then pass on this body.
Read more
8 people found this helpful
Helpful
Comment Report abuse
See all reviews
Pages with related products. See and discover other items: mirrorless camera, mirrorless digital camera