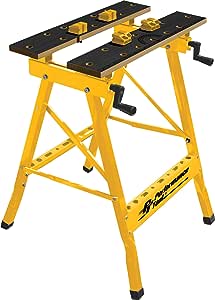 4.1 out of 5 stars
4.1 out of 5
799 global ratings
How are ratings calculated?
To calculate the overall star rating and percentage breakdown by star, we don’t use a simple average. Instead, our system considers things like how recent a review is and if the reviewer bought the item on Amazon. It also analyzes reviews to verify trustworthiness.

Maker Mac
3.0 out of 5 stars First off, the bends are intentional...
Reviewed in the United States on July 3, 2017
Size: Multipurpose WorkbenchVerified Purchase
I dont like giving lower review scores, but I need to be honest. Once it's out together this item serves as exactly what it's supposed to be - a basic, rather cheap, portable folding workbench. My issues are in two areas.

First, the "bends" or "dents" in the legs are intentionally part of the design. However this is not necessarily clear at first, especially since I received a damaged box (the outer Amazon packing was intact - it was the product packaging inside that was as shown in the photos) and the small spanner wrench included was "damaged" bent too. The leg bends are deep and symmetrical on all four legs, but the schematics in the Instructions are extremely Tiny and none of the photo angles on the box show the inner legs. So I want sure if if it had a damaged item until it was fully assembled and I could see the angles.

Second, there were missing parts. There were dozens of small spare washers, but the 16 (3/4") wood screws necessary to secure the top of the bench to the metal vice / frame were missing. Luckily I had a box of screws around the house...

Overall,the structural quality is exactly what I expected it to be and I expect it will do its intended job (I will post otherwise if it doesn't) and I will chalk it up to a damaged box with missing pieces. But I don't know whether the damage and missing parts occurred at the level of Amazon, the manufacturer or the distributor. I just expected better product QC. That's all.

Alamist
2.0 out of 5 stars What. A. Joke.
Reviewed in the United States on November 26, 2018
Size: Multipurpose WorkbenchVerified Purchase
I purchased this item as a cheap, accessible bench to use for the odd diy project. Already I'm not impressed.

When I opened up the box, there was a label pasted on the original packaging indicating a return from a previous customer. So... Great - I got a used product that I paid for as if it was new.

Also, the instructions are incredibly vague and they provide NO extra parts in the event of something being defective. Unfortunately for me, one of the nuts was defective, and I was unable to install one of the screws.

I would suggest looking elsewhere. Sure... The product EXISTS and provides the physical items it describes. But, there is certainly something sketchy involved as well.
Read more
7 people found this helpful
Helpful
Comment Report abuse

M. D. Mosher
3.0 out of 5 stars As long as your expectations aren't very high, this is an adequate workbench.
Reviewed in the United States on November 29, 2015
Size: Multipurpose WorkbenchVerified Purchase
This is exactly what I expected it to be; a cheaply made "work bench" that does the job as long as you don't expect too much of it. But it serves it's purpose perfectly; it was cheap, it was easy to assemble, it's lightweight, and it's sturdy enough for what I need it to do. I have a couple of Workmates back home, but there was no way I was going to spend that much for my current situation (military base overseas). So, I had this shipped to have something better than a stack of tires to work little projects on.

Pros: It was cheap enough that I won't shed a tear leaving it behind at the end of this tour; assembly was very straight forward (even included "tools" to assemble itself); it folds up sufficiently to make it somewhat store-able, and is easy to carry due to it's minimal weight; and it's strong enough for "sawhorse" work, up to 200 lbs, or so it says. The paint job was nicely applied, so it should remain rust-free for some time.

Cons: As I've said, it's cheap; stamped metal, particle board, plastic parts. It certainly doesn't have the "overbuilt" qualities of my Workmate benches, as material and design is the minimum required to achieve function. The work surface is small, even when you expand the tabletop to max opening. And about the opening mechanics; unlike my Workbench, each side cranks independently, and don't have very much clamping power. The "bench dogs", the little plastic thingys, really aren't strong enough or large enough to provide sufficient grip; they'll hold a board down to cut it, but they won't hold material solidly enough so you can work on it (like a door so you can put a hinge on it).

Having said all that, I'm still satisfied with the purchase. It's exactly for what I expected it would be and sufficient for the type of work it's being used for over here. I'd even consider buying a couple for home as upgraded sawhorses. Sure, they won't replace my Black & Decker Workmates or my Keter folding worktable, but at less than half the price for the cheapest of either of these certainly makes up for the shortfalls.
Read more
17 people found this helpful
Helpful
Comment Report abuse

markld
5.0 out of 5 stars Good Lightweight portable bench!!! BARGAIN!
Reviewed in the United States on July 1, 2017
Size: Multipurpose WorkbenchVerified Purchase
Oh this is a sweet portable work bench and you get what you pay for like particle boards tops... I am not a fan of particle boards, and I will probably make a couple of new top boards when these wear out. The reason I got this bench was while at a jobsite, I just need to clamp and hold on to a pipe and screw on fittings. If I can get 20-25 uses for this bench, ill take it.
Update: Bench is holding up, its really easy and portable to lug around. I have treated it with hard tasks and it has come through. For what I put it through it held up fine. I think I will get at least 25 uses out of the particle board tops, however, I am impressed with the frame, it appears that it will hold up for quite awhile.
Read more
8 people found this helpful
Helpful
Comment Report abuse

Kindle Customer
4.0 out of 5 stars Good value for the money. Easy assembly.
Reviewed in the United States on October 20, 2016
Size: Multipurpose WorkbenchVerified Purchase
Really nice little workbench for the money. Easy to assemble and heavy enough to hold down a 2x4 to cut. Assembly instructions were very small and incomprehensible so I just followed the picture on the box. Worked!!! The Phillips screws holding the top to the legs were weak at best (impossible to drive all the way in, the heads stripped). I replaced them with 3/4 inch self tapping sheet metal screws. If those loosen up then pan head torx with a lock washer and end nut is next. I'll never figure up why they take a basically good product and cripple it with weak fasteners.
Read more
11 people found this helpful
Helpful
Comment Report abuse
See all reviews

Jessica B
1.0 out of 5 stars Very cheaply made
Reviewed in Canada on February 14, 2019
Size: Multipurpose WorkbenchVerified Purchase
I needed a small bench to use to saw wood. This bench is the small I was looking for, however not all the screws were included, the metal parts aren't rhe same shade of yellow and the whole thing wobbles. I will tweak it to make it more sturdy and use bolts I already have, but really??? I wouldn't recommend it.
Read more
4 people found this helpful
Report abuse

Robert
1.0 out of 5 stars 👎👎👎
Reviewed in Canada on June 27, 2019
Size: Multipurpose WorkbenchVerified Purchase
It says it'll hold 200 lbs it won't hold more than 50 trust me I broke it with like five pounds and yet still waiting to receive my money from them I had to tear it apart send it away to him and I don't get paid until he gets his product back so poor product poor ownership real letdown and disappointment it don't hold 200 lb
Read more
2 people found this helpful
Report abuse
See all reviews
Pages with related products. See and discover other items: folding garage storage, workbench for garage, working stand, shop bench, small bench vise, tool storage system