You've subscribed to Viridian System! We will preorder your items within 24 hours of when they become available. When new books are released, we'll charge your default payment method for the lowest price available during the pre-order period.
Update your device or payment method, cancel individual pre-orders or your subscription at
Your Memberships & Subscriptions
There was an error. We were unable to process your subscription due to an error. Please refresh and try again. 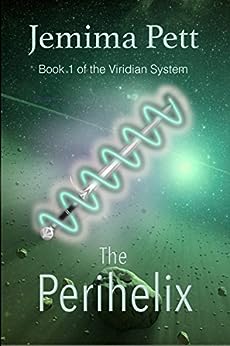 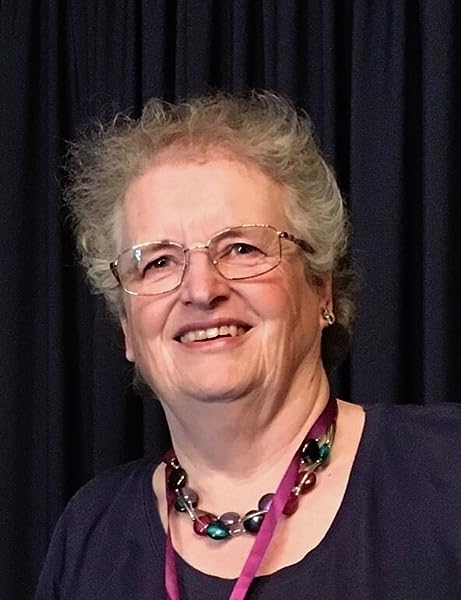 Listen with Pride
Explore the diverse array of titles—some funny, some brave, some thrilling, some sad—to find connection and inspiration. See more
Books In This Series (3 Books)
Complete Series 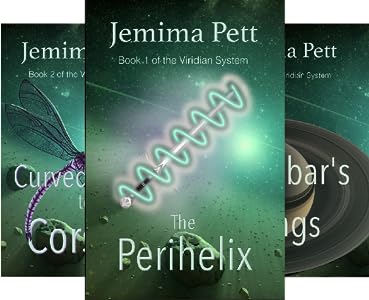 Jemima Pett started writing when she was 8 years old, and read all the scifi books in her local library when she was a teen - or so she thinks. Inevitably, once she had successfully launched the Princelings of the East series for young teens, she started thinking about space adventures. Her cross-disciplinary background in maths, astronomy, human resources, earth science and environmental technology leads her down some wild paths - and hopefully the characters can find their ways back again! --This text refers to an out of print or unavailable edition of this title.

TimDouglass
5.0 out of 5 stars Enjoyable read with a complex plot.
Reviewed in the United States on April 9, 2016
Verified Purchase
Overall I found The Perihelix an engaging and engrossing read. The writing is solid and without any of the grammatical glitches that can drive me nuts. There were a few formatting errors in the Kindle edition, which look to me like typical conversion problems from Word to Kindle - you would almost think Microsoft and Amazon didn't like one another.

I enjoy Science Fiction, and this is mostly Science Fiction, it does, however, have a smattering of fantasy mixed in, which made it somewhat less my style, although still very enjoyable. My major complaint about the book would be that there seemed to be too many planets, factions, and individuals who were occasionally hard to keep straight as far as their motivations and intentions were concerned. I also felt at times like I was joining the story half-way through and that there should be a prequel to fill in some of the background. But those were not serious distractions from my ability to enjoy the story.

The plot resolves the major theme well and also leaves a lot of unanswered questions, leading me to expect a sequel (and I will be disappointed if there isn't one).
Read more
Helpful
Report abuse

The Perihelix, book 1 of the Veridian System, follows Pete and the Swede in an intergalactic adventure as they race to find the five pieces of a legendary weapon before their enemies do. It's an exciting, action-packed story, with Pete, Lars, and their friends dodging kidnappers and murderers, running away from both the Federation and the Imperium, as well as attempting to keep their pasts buried. But pasts don't like to stay hidden, especially when someone is trying very hard to bring them to light.

I struggled to follow the beginning as Pett tried to set the tone for the rest of the story, but fortunately, it started to flow better somewhere in the middle of chapter 2 or 3. It isn't a kind of starting that pulls you in, but one that you have to work at a little. I found this a bit strange because Pett has published many books before this, including the Princelings Trilogy, so this shouldn't be an issue. Maybe a side effect of writing in a new genre?

The story sometimes suffers from having too many things happen at the same time, including a random stray miner saved by Pete and Lars. The 5 of them dash back and forth from planet to planet, and it sometimes get a little difficult to keep track. There's also a lot of allusions to hidden pasts and pasts that are being actively forgotten, but not all of them have been revealed yet, and I'm not sure if they will be, or if they are relevant. One person's past, which I would have been interested to find out about will likely not be revealed because she dies in the book (Not naming names! But yeah, people die in this book.) I can't really pinpoint anything specific though - just an overall feeling of it being cluttered.

Overall, it's still a good story. I guess I just didn't like the execution as much as I wanted to.
Read more
Helpful
Report abuse

Hellvis
4.0 out of 5 stars In space, no one knows your secrets...or do they?
Reviewed in the United States on March 30, 2016
I absoloutely loved The Perihelix, I found it engaging, exciting, and I love how the author wove in George and the Cavies in a nod to her other works (The Princelings series).

The pacing and action keeps the book constantly firing on all four cylinders as Pete, Lars and their companions blast their through space; planet hopping to keep just one step ahead of their enemies.

There's secrets enough to fill a cargo freighter, and the hints to the boys' pasts are agonising. The need to know is almost unbearable and there are those who would go to any lengths to obtain what they know, what they have.

I'm desperate to know more about the boys' backgrounds, and I'm even more intrigued by the potential directions their future adventures could take.
Read more
One person found this helpful
Helpful
Report abuse

J Lenni Dorner
4.0 out of 5 stars When sci-fi and fantasy collide in space and Chicago
Reviewed in the United States on September 14, 2016
The book is mostly heavy science fiction. Plenty of details for the sci-fi “geek” reader. Then there’s a bit of fantasy mixed in. A sword, knights, a dragon– fantasy. It is listed as Books › Science Fiction & Fantasy › Fantasy. However, it felt much more like science fiction to me. (See the genre: Speculative Fiction)

It was an interesting story with some unusual characters.
Read more
Helpful
Report abuse
See all reviews
Back to top
Get to Know Us
Make Money with Us
Amazon Payment Products
Let Us Help You
EnglishChoose a language for shopping. United StatesChoose a country/region for shopping.
© 1996-2021, Amazon.com, Inc. or its affiliates