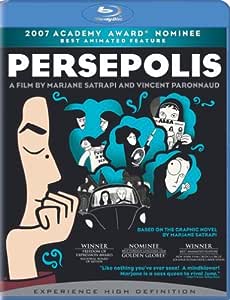 Persepolis is the poignant story of a young girl coming-of-age in Iran during the Islamic Revolution. It is through the eyes of precocious and outspoken nine-year-old Marjane that we see a people's hopes dashed as fundamentalists take power — forcing the veil on women and imprisoning thousands. Clever and fearless, she outsmarts the "social guardians" and discovers punk, ABBA and Iron Maiden. Yet when her uncle is senselessly executed and as bombs fall around Tehran in the Iran/Iraq war the daily fear that permeates life in Iran is palpable. As she gets older, Marjane's boldness causes her parents to worry over her continued safety. And so, at age fourteen, they make the difficult decision to send her to school in Austria. Vulnerable and alone in a strange land, she endures the typical ordeals of a teenager. In addition, Marjane has to combat being equated with the religious fundamentalism and extremism she fled her country to escape. Over time, she gains acceptance, and even experien

A fascinating and wholly unexpected take on Irans Islamic revolution beginning in the 1970s, Persepolis is an enthralling, animated feature about a spirited young woman who spends her life trying to deal with the consequences of her nations history. Based on an autobiographical comic book by Marjane Satrapi, the story concerns Marji (voiced as a teenager and woman by Chiara Mastroianni), whose natural fire and precociousness are slowly dampened by the rise of religious extremists. Marji grieves over the imprisonment and execution of a beloved uncle, then begrudgingly adapts to ever-tightening rules about dress, social mores, education for women, and expectations about marriage and divorce. Along the way, her grandmother (Danielle Darrieux) and mother (Catherine Deneuve) help keep Marji grounded during her rebellious teens and encourage her to find life beyond Irans borders, a decision that proves both a blessing and curse. An unique window onto a crucial chapter of 20th century history, Persepolis is graphically engaging with its black-and-white, bold lines and feeling of repressed energy, fit to burst. The emotional content is so strong that after awhile, one almost forgets the film is a cartoon. Satrapi co-wrote the screenplay and co-directed the film along with animator Vincent Paronnaud. --Tom Keogh