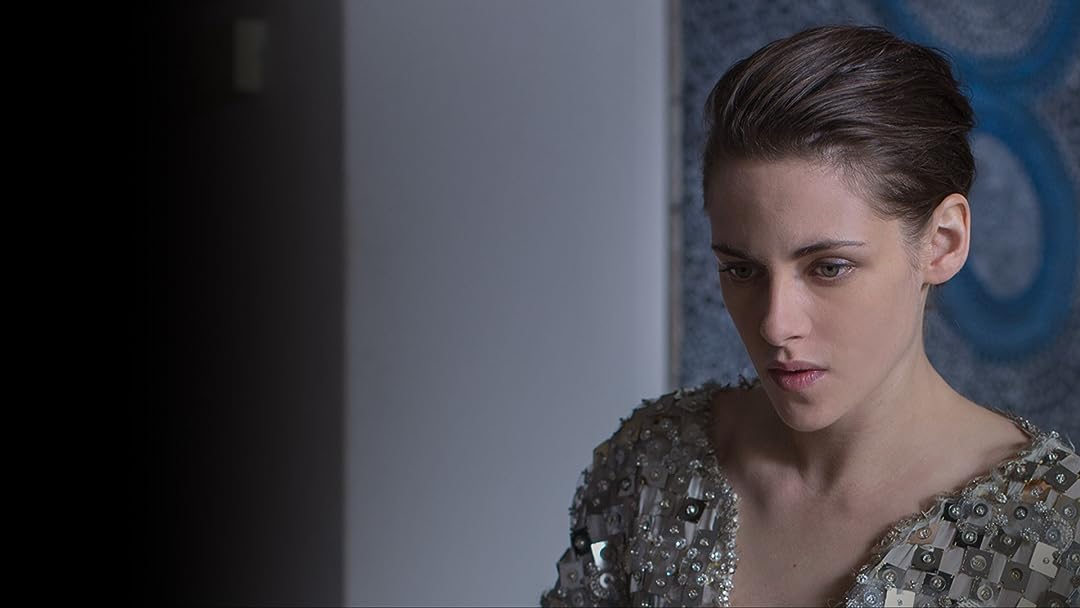 (701)
6.11 h 45 min2016NR
A young psychic is plunged into a dangerous game of cat and mouse when she makes contact with a sinister spirit. Kristen Stewart stars in this seductive thriller.

Lizzy LezReviewed in the United States on July 5, 2017
5.0 out of 5 stars
A Quiet, Understated Art Film
Verified purchase
Kristen Stewart seems to be the master of understatement, in the very best sense. This is a spare, understated movie, not a horror movie or a ghost story. It's a movie about loss and grief and the hope that somehow a person can still hold a real, physical connection to a loved one after death. The movie flows beautifully with excellent musical choices and the cold, stark landscape of Paris in autumn. I'm impressed that Stewart could basically carry the movie by herself with very little help from any other actors. I greatly enjoyed this art film and will watch it again before my rental runs out. It gave me the chance to practice my French, but most of all, I relished the very quiet, well-played performance by Kristen Stewart. Eah time I watch a new movie of hers, I admire her acting skills more.
65 people found this helpful

DRFReviewed in the United States on November 16, 2017
5.0 out of 5 stars
Was skeptical of this film at first but found myself slowly sucked in...
Verified purchase
By the time it was wrapping up I felt like I needed more time. It stayed with me days later. Bizarre experience. For anyone commenting about this being a horror movie except boring? Sorry but you're missing the mark. This was clearly made with the intended purpose of not being placed neatly into a single genre bucket. You can argue mis-marketing or excessive hype by critics. I'm also more than willing to buy the possibility the director never intended to answer several open-ended plot devices with overt smokescreen obfuscation. I found the pliability to be the most intriguing aspect of the story. Engrossing and thoroughly thought provoking. Recommend!
For those critical of Kristen Stewart, I found this role perfect for her as the character and story were every bit as fleeting as her specific style & delivery. Hard to imagine another pulling this off in the same manner and consistent with the director's intended vision.
23 people found this helpful

AmazonuserReviewed in the United States on August 8, 2020
1.0 out of 5 stars
something happens finally, at the 1 hour 15 minute mark.
Verified purchase
I am guessing this was a sundance film and I'm guessing it did not receive a wide release.

The film tried in a pseudo intellectual sort of way to bring several strands of ideas together--spiritualism in the 1800s in sweden and England, artists/"designers" as channels for a greater consciousness that uses them to create, the idea that a medium may be simply projecting their own thoughts onto inanimate objects.

The "intellectualism" here is that the film never really takes a position on any of this, and doesn't make a compelling argument for any of these ideas--they're not really new ideas, and they're not developed at all, in this film. The characters are likewise not developed--the only person who stands out, as usual, is kristen Stewart, playing (essentially) herself, as usual. She is extremely watchable and brings some kind of dramatic tension to scenes that are ostensibly about nothing. Unfortunately the material here is really too thin to sustain any narrative.

to be generous: 2 stars, for Kristen Stewart's ability to dramatically board and disembark trains in Europe.

Health JourneyReviewed in the United States on July 30, 2018
2.0 out of 5 stars
Worst Movie I've Seen This Year.
Verified purchase
I am a Kristen Stewart fan. However; this was the dullest and most uneventful movie I've ever seen. Although I have seen the rating here on Amazon for 3 stars, I still wanted to judge it for myself. And in this event, I wished I would've not wasted my time. The storyline jumps around too much. It doesn't delve deep into the psychic area nor does it delve deep into the issues being a personal shopper. It was confusing, I kept waiting for it to come through and it never did. All of the people who have given this 5 stars I'm utterly surprised. It was about a personal shopper who was a psychic, who had an anonymous stalker turned killer giving the gifts that she purchased for her celebrity boss, then about her grieving - almost communicating with spirits, it was just bad. I felt like Kristen's acting in this one was just as confusing in this movie as the movie itself. She's done better.
8 people found this helpful

MichaelReviewed in the United States on August 12, 2018
2.0 out of 5 stars
Personal Shoplifter
Verified purchase
What a mess of a movie. There are so many things that just don't add up. The references to Hilma af Klint (a little-known abstract artist) and Victor Hugo are overly time-consuming and have nothing to do with the plot. It's just window dressing, like the Gucci bags and Cartier jewels. The whole thing is pretentious.

Another major weakness is that the movie relies heavily on a chain of text messages to develop suspense. We probably read 50 or more of these tedious messages back and forth. Didn't anybody tell the writer that filmmaking is a visual medium?

I must admit that I could not follow the movie on a literal level at all. There was a poltergeist investigation and a mysterious murder and a dead sibling trying to communicate from beyond. These weren't subplots, but completely different stories. To cover all bases, we repeatedly hear that "things aren't what they seem." I got the feeling it was all some kind of game. But if so, I don't think it's a game that plays fair by the viewer.

The ending is especially ambiguous. Is it because the story is inherently open-ended? Or is it because there simply wasn't a way to wrap up all these loose ends? You be the judge.
6 people found this helpful

Deb2theCReviewed in the United States on July 24, 2020
4.0 out of 5 stars
Wonderful!! Scared me a lot!! Quite realistic, imo much more mature acting from K.S
Verified purchase
GONE is the former sweet teen actress from the "Twilight" years thanks be to whomever! In that young woman's shoes now stand a much more mature and definitely more accomplished actress whom it is now my pleasure to watch wield her art! Several months back I read an article in "Vanity Fair about Kristen Stewart during the reading of I decided to give her another chance to prove her abilities again (as compared to the "Twilight"series actress).The article mostly consisted of her modeling very chic clothing and her conversing back and forth about her more recent acting jobs and the recent reviews on those efforts. Unlike many similar interviews with the younger women who act in movies these days there was no tittle-tattle back and forth about her personal life, mostly because she pretty much refused to indulge the writer's queries. HOW REFRESHING! This is the first film of hers that I've seen since reading that article and I stand impressed by the more mature and ultimately more solidly accomplished actor that took over for the youngster she used to be. Keep up the good work and smart choices, Ms Stewart!!
One person found this helpful

Kim WeekleyReviewed in the United States on January 23, 2022
4.0 out of 5 stars
You will either like it or hate it, there's no middle ground here
Verified purchase
There's a divide in the reviews, those that absolutely love this movie, and those that absolutely hated it. I'm somewhere in the middle. I didn't hate it, but at the same time I don't really like it either. Some have referred to this as a thinking movie but it's really not. I enjoy movies that make you think but this one was too superficial and too spread out. It's a movie trying to be something it's not. It was so busy trying to be suspenseful while trying to be a whodunit while trying to be a movie about the paranormal but really all we get is Kristen Stewart on a bus, train, scooter, etc. What was the point of the entity she saw when trying to get in contact with Lewis? This movie was just all over the place. I don't regret watching it but wouldn't watch it again.

CzernoblogReviewed in the United States on January 25, 2022
2.0 out of 5 stars
Abysmal
Verified purchase
This film lacks even one sympathetic character. In fact, all of the characters are so thinly drawn they are barely characters at all. Kristin Stewart's character has the emotional breadth of a mayonnaise sandwich and the mental acuity of someone who has moved from glue-sniffing to experience the joys of trepanning.
On top of this, the plot is nonsensical. The protagonist behaves like a suicidal ninny who, left to her own devices, would just wander into traffic.
One person found this helpful
See all reviews
Back to top
Get to Know Us
Make Money with Us
Amazon Payment Products
Let Us Help You
EnglishChoose a language for shopping. United StatesChoose a country/region for shopping.
© 1996-2022, Amazon.com, Inc. or its affiliates