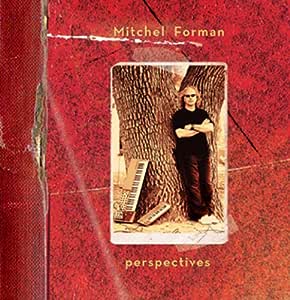 Keyboardist Mitchel Forman presents a unique “Perspective” on his new collection of classic jazz tunes, which includes signature songs by such jazz legends as John McLaughlin, Chick Corea, Wayne Shorter, Herbie Hancock, Keith Jarrett, Ron Carter and Russell Ferrante. In a career that has spanned two decades, Forman has performed with many of the artists whose compositions are featured on “Perspectives.” His bio and discography read like a virtual who’s who of modern jazz, and include work with musicians ranging from Stan Getz and Gerry Mulligan to Pat Metheny and Wayne Shorter. Talented on both acoustic and electric keyboards, Forman performs in a variety of settings on “Perspectives.” Joining him are an impressive set of players, including Trey Henry (Tierney Sutton, the Gerald Wilson Orchestra) on bass, Ray Brinker (Ray Charles, Pat Benatar) on drums, and Munyungo Jackson (Stevie Wonder, Herbie Hancock) on percussion.

One of the most versatile and accomplished pianists working in jazz today, Mitchel Forman pays tribute to his diverse musical influences – many of whom he’s recorded or performed alongside – on his eleventh recording as a leader, “Perspectives.” The CD, released on Forman’s own Marsis Jazz label, features the talented pianist performing songs by the Beatles, Wayne Shorter, Ron Carter, Herbie Hancock, Keith Jarrett, Russell Ferrante, Chick Corea, John McLaughlin, along with the Louis Armstrong classic “Wonderful World” and a couple of originals. Forman is joined on “Perspectives” by Trey Henry on bass, Ray Brinker on drums, Munyungo Jackson on percussion and Jeff Richman on guitar. The new CD is Forman’s first as a leader since 2002’s live “Mr. Clean.” In the interim, Mitchel continued as co-leader of the four-man band Metro, with guitarist Chuck Loeb. Metro has released five CDs, beginning with an eponymous debut in 1994, followed by “Tree People,” “Metro Café,” “Hip Bob,” Grapevine,” and – most recently - “Metrolive At the A Train.” Metro, which includes Mel Brown on bass and drummer Wolfgang Haffner (who also contributes to one track on “Perspectives,”) is particularly well received throughout Europe, where they tour every year. Equally acclaimed for his work as a sideman as he is as for his solo and group efforts, Forman has been a member of trumpeter Rick Braun’s band for the past several years, and a member of BWB (with Braun, Kirk Whalum and Norman Brown.) Throughout his two-decade long career, Forman has worked with an astounding array of musical luminaries, including John Scofield, Mike Stern, Janis Siegal, Dave Samuels, Diane Schuur, Gary Burton, Pat Metheny, Freddie Hubbard, Bill Evans, Ricki Lee Jones, Jeff Golub, Enrique Iglesias, and Brandon Fields. Forman’s career took off soon after he graduated from the Manhattan School of Music, when he began touring and recording with Gerry Mulligan, playing in both his big band and quartet. Work with Stan Getz followed. As he continued to develop an impressive resume as a sideman, touring with Phil Woods, Carla Bley, Mel Torme, and Astrud Gilberto, Forman’s solo career also began to take shape. In 1980, his performance at the Newport Jazz Festival was captured on what was to become his debut recording in his own right, “Live at Newport,” for the Japanese label East/West. Also in the 80’s, Forman joined John McLaughlin’s Mahavishnu Orchestra, spending 18 months on the road with the band, and contributed to two benchmark recordings: the seminal “Mahavishnu” and “Adventures in Radioland.” He then joined legendary ex-Weather Report saxophonist Wayne Shorter on the road and in the studio, and can be heard on Shorter’s “Phantom Navigator” (1991.) A complete discography can be found at www.mitchelforman.com.