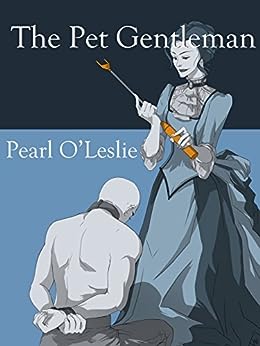 by Pearl O'Leslie (Author) Format: Kindle Edition
See all formats and editions
Sorry, there was a problem loading this page. Try again.
A wealthy and powerful lady takes a political prisoner, breaks him down and makes him into her pet. No extreme is too much for Annette and her decadent friends, as they transform the poet, Phillip, into a slave and pet gentleman, Adam.

Pearl O'Leslie (Miss Pearl) is a Canadian female dominant and writer. She cares about making her stories real and enjoys sharing her talent for writing sizzling erotica. When she isn't putting out books to read she likes tea, pastries and ethical kink.

bob_bell
5.0 out of 5 stars I typically only enjoy Femdom novels that are consensual
Reviewed in the United States on May 6, 2016
Verified Purchase
Very well written. I typically only enjoy Femdom novels that are consensual. This one was an exception to that rule. Philip/Adam was a political prisoner who had the luck of catching the eye of Annette who is politically connected to the ruling class. She elects to take ownership of Philip and begins to mold him into her ideal. Philip observes that when she is cruel too him Annette becomes sexually aroused. He doesn't seem to have a submissive nature at the start but the tortures he undergoes and the steamy hot love making that often follow, result in his compliancy toward Annette. Philip seldom does anything to displease her so I don't fully understand the motivation behind her harsh treatment of him other than she is simply turned on by her own sadism. Wow! As the story ends a strong and loving bond is developing between them as Philip seems to be in complete (consensual at this point) submission to her will. I can't wait for part 2 of this one!!
Read more
2 people found this helpful
Helpful
Report abuse

Skin Shallow
5.0 out of 5 stars So it's really good to see (and read) stories not just written by ...
Reviewed in the United States on November 17, 2015
It's “a given” that most erotica readers are female. Men, we are told, are visual, and go for visual stuff. I have doubts here, but even if it's generally true, I think we can safely assume that there is a written erotica category that caters predominantly to men. That this category is populated by stories of female dominance/male submission is just another example of how male-sub/fem-dom material, ostensibly being all about female pleasure, is in fact one of the most male-desire-centered niches.

So it's really good to see (and read) stories not just written by but appealing to dominant/sadistic women. And Pet Gentleman certainly does have such an appeal.

I really like Pearl O'Leslie blog – both the sexy posts and the thoughtful ones - but I was reluctant to give this novella length piece a go, because I'm not a huge fan of non-consent fantasies. But I'm glad I did and Pet Gentleman worked nicely for me.

Maybe it was the setting? I'm a sucker for world building and the totalitarian, Anglo-Ruritanian steam-punkish universe of Pet Gentleman both appealed in itself and added plausibility to the story.

Or maybe it was the convincingly effective way in which the main character utilized Stockholm Syndrome, classic torture/brainwashing techniques and behaviorist conditioning to break and recreate her subject and yet remained strangely human in that. And it was fun to imagine myself with her set of skills, her resources - and her lack of scruples. I'd like to know more of Anette's inner workings and of the world she inhabits to see where her sense of selfish entitlement and amoral innocence come from. If the title of the next installment in the series is anything to go by, some reveals might be coming. I'm looking forward to them.

As to Philip/Adam, I wanted more insight. He is neither a masochistic sub or an evildoer in need of punishment. He's Anette's project, picked for reasons having nothing to do with HIS sexuality. His inner transformation, although partially explained by his treatment, remains a bit of mystery. He's stoic and noble and rather good at that whole enduring thing (yummmm) but isn't he bothered by his growing mental enslavement and attraction? At least internally? And if not, why not? There's a bit about that towards the end, but I'd have loved more, on that and on his sexual evolution, throughout the story.

I can feel anybody reading this getting impatient. "This is erotica! Stop going on about world construction and characters and tell us about the sexy bits! Were they hot? Did you come?"

OK then. They were hot. Some very hot. Anette's sadism is thorough but within realms of realism, her arousal in response to Philip's pain and the sight and feel of his marked body convincing and very relateable, her utter selfishness both delightful and chilling.

And I did.
Read more
11 people found this helpful
Helpful
Report abuse
See all reviews

Quiet Night In
5.0 out of 5 stars Well written, authentic deviant erotica
Reviewed in the United Kingdom on January 25, 2021
Verified Purchase
Well written, authentic, Pearl's deep understanding of such relationships shines through. Especially valuable to get the female perspective. Some beautiful moments as Pet grows to relish and appreciate his place, and is rewarded by his owner. I wish it were much longer!
Read more
Report abuse