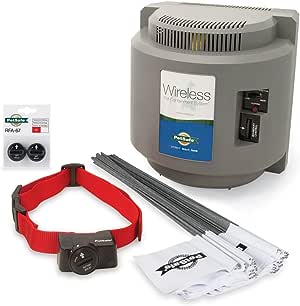 Offering safety and portability, the new wireless instant fence pif 300 from Petsafe is the first electronic containment system with instant installation. If you can plug in a cord, you can install instant fence: no unattractive poles to set up and no wires to bury. Instant fence uses a constant radio signal to create a "stay zone". When your pet leaves the area, he receives a mild correction until he returns to the containment area or until approximately 35 seconds have passed. Since Petsafe instant fence is completely portable, you can take it and your pet wherever you go. So your pet is safe, and your mind is at ease. Containment it is ideal for flat yards, and portable easy to install creates a boundary circle with a 180 ft. Diameter includes new, 2.5-ounce. Waterproof pif-275-19 receiver uses 6 volt battery module operates multiple collars system includes 50 training flags incase of power outage the system turns off the collar containment area can be increased with additional if-100 transmitters.

4.3 out of 5 stars
4.3 out of 5
448 global ratings
How are ratings calculated?
To calculate the overall star rating and percentage breakdown by star, we don’t use a simple average. Instead, our system considers things like how recent a review is and if the reviewer bought the item on Amazon. It also analyzes reviews to verify trustworthiness.

terdallaujar
5.0 out of 5 stars This Solved Our Problems
Reviewed in the United States on December 21, 2016
Verified Purchase
I would recommend this system.

We live in the county and there is a deer hunting club near our home where people pay to hunt in the fall of the year. We have several dogs in our yard that roam freely. The manager of the hunting club called to say that our dogs had been disturbing his hunting. Deer hunters have been known to kill dogs, so we knew we had to do something. I truly HATE to keep any dog tied. Seems one of our dogs is like the leader. So if she wants to run off, the other dogs will follow. We purchased this system and put it on the problem dog. We put the collar on the lowest shock setting. It literally took 1 day for her to understand what was going on. I put it on her in the early am and take it off when dark. The 90 foot radius doesn't sound like a lot but is very substantial for our surroundings. When she hears the collar start to beep, she heads back to her safe zone. Slowly she is learning her boundary. She comes to me every day now knowing that it is time to put her collar on. Our problem has been solved.

Amazon Customer
5.0 out of 5 stars Best decision I’ve made.
Reviewed in the United States on April 17, 2018
Verified Purchase
I don’t usually do review but I had to for this product.

It got to my house within three days. I only had to let it shock my dog twice before he learned he could not go any farther. Whenever he goes beyond the barrier he hears the sound and automatically turns around. If your dog is as hard headed as mine then this will be a really great way to let him roam outside freely. I still don’t let him stay outside by himself but that’s just how I am. I did have to put the flags up and turn it all the way up. When it shocks them it will hurt them and trust me it really did hurt me seeing it. I can tell myself now that it was the best decision I made. He can run in the yard and play without me worrying about him running after the neighbors cows or a car. He is much more happy now. I know some people have talked about a blind spot but I haven’t seen it yet. I have only been using it for four days so time will tell. As of right now I have zero complaints. I am extremely happy that my baby boy has so much freedom. He does seem so much happier now. If we do find the blind spot or anything happenes I will edit this review.

stephTop Contributor: Pets
4.0 out of 5 stars works on slopes, annoying that collar sometimes wont shock unless adjusted and tightened 'just right'
Reviewed in the United States on May 31, 2017
Verified Purchase
works as expected. We have a very sloped yard, so I was worried it would have problems, but so far so good. We have it set on highest range as we are on acerage, and our dog is a large breed (75 pound lab/collie). He's only 1 so still needs some training, but it's been a few days, and he seems to be figuring it out.
I had to put on the long prongs, and had to tighten the collar to make sure they are touching his skin. (The first day we tried with shock, it wouldn't work until we did those 2 things).
Also, the first day we did shock, he got freaked out and didn't want to go outside, period. And when we'd drag him out of the house... literally... he's pee right next to the house and then sit by the door to get back in. So we took a couple days off, and he got over it. Just tried the collar again today, walked him around the perimeter,and as soon as it would been he'd run back to towards the house away from it.

My ONLY complaint is that sometimes I put it on and it he doesn't get shocked until I mess around with the collar, get it tighter, etc... and you can only know if it worked if he gets shocked. I wanted to try letting him loose with it in the yard while I picked up kids at school today, and he ran right out into the road with the car... so it obviously wasn't fitting just right, and I didn't have time to mess around, test it out, so just had to chain him back up to his lead. I'm sure at some point he'll get good enough with it that even if the shock doesn't work, the beep will keep him in the boundaries, but for now, the collar seems a bit finicky. Especially since it's designed for an animal that's going to be shaking it around and scratching at it...

Mom of 3
1.0 out of 5 stars Invisible Line not set, moves all the time without moving the receiver and scares our dog!
Reviewed in the United States on August 18, 2017
Verified Purchase
Our 60lb Goldendoodle responds to the fence containment system very well, the problem is that the invisible fence line is ALWAYS changing without moving the receiver at all. I am not sure what changes the fence line probably wireless internet, large metal objects (cars in garage, washer/dryer) etc... But now are sweet girl is terrified to go outside with her fence collar on, she knows she will probably get zapped for no reason being no were near where the fence previously ended. It can move as much as 2-3 feet sometimes and other times when a car or other large metal device blocks the signal it creates huge holes in the invisible fence line!! I hate this thing and find it so frustrating, wish we had just rented a trench digger and installed a wired fence system so the line would NEVER move on her.
Read more
22 people found this helpful
Helpful
Comment Report abuse

SH
5.0 out of 5 stars Works GREAT!!!
Reviewed in the United States on March 12, 2018
Verified Purchase
We have a German Shepherd that would run away non-stop!! Nothing seem to break her of it because she was so stubborn. This is the only thing that has worked on her. I would highly recommend it has been the best invention ever!!
Read more
18 people found this helpful
Helpful
Comment Report abuse

Christy
5.0 out of 5 stars Great tool for dog owners!
Reviewed in the United States on January 26, 2018
Verified Purchase
This is a great product. Glad we found it before spending more money on invisible fence. Would recommend to anyone. We have a small morkie and it works like a charm on her. The training process went well and the instructions were excellent. Has multiple shock/alarm settings which is good. Wish batteries lasted longer but can’t complain.
Read more
15 people found this helpful
Helpful
Comment Report abuse

Gerry B.
5.0 out of 5 stars Easy set up and use.
Reviewed in the United States on June 11, 2017
Verified Purchase
Our dog loves to dart out the front door, and after a close call we picked up this wireless fence. We set it up to 'train' her where the fence using the beeps first and gave her treats as we turned away from the fence line. One day one of the kids let her out of the house and she made it to the fence and received a shocking reminder that the fence was active. Now she wanders out the door but easily turns back into the house without any issue.
The set up and training was easy. I am very happy with this product.
Read more
16 people found this helpful
Helpful
Comment Report abuse

NotBeingPaidToReview
2.0 out of 5 stars Bummed I couldn't Trust it
Reviewed in the United States on March 4, 2017
Verified Purchase
Bummed this doesn't work well. The shape of the field is not circular like you'd hope. I tried inside and everything interfered with it, not just metal or electronics. Tried outside while elevated as recommended and still the shape of the field was inconsistent. There were also gaps my dog could get through.

Missed the return window so I'm partly to blame. Hopefully I just got a bad one.
Read more
15 people found this helpful
Helpful
Comment Report abuse
See all reviews

Kim Weir
5.0 out of 5 stars Love this unit
Reviewed in Canada on April 30, 2020
Verified Purchase
Fast shipping plugged the unit in and worked with our other collar so we now have a spare
Read more
Report abuse
See all reviews