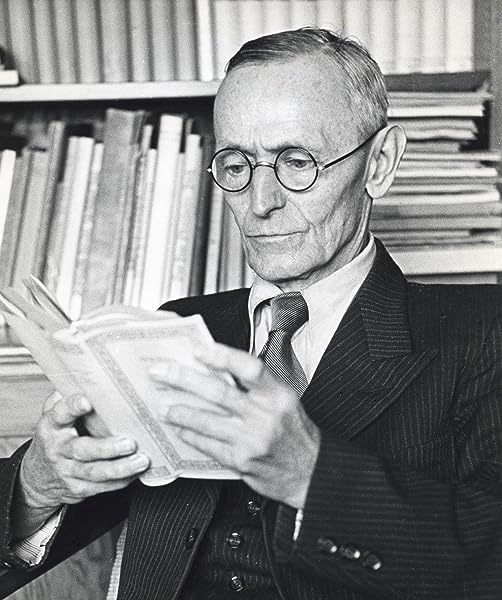 by Hermann Hesse (Author), Michael Roloff (Translator)
4.6 out of 5 stars 54 ratings
See all formats and editions
Sorry, there was a problem loading this page. Try again.

Peter Camenzind, a young man from a Swiss mountain village, leaves his home and eagerly takes to the road in search of new experience. Traveling through Italy and France, Camenzind is increasingly disillusioned by the suffering he discovers around him; after failed romances and a tragic friendship, his idealism fades into crushing hopelessness. He finds peace again only when he cares for Boppi, an invalid who renews Camenzind's love for humanity and inspires him once again to find joy in the smallest details of every life.

“Moving and profound. Hesse is a writer of suggestion, of nuance, of spiritual intimation.” ―The Christian Science Monitor

Hermann Hesse (1877-1962) was a German poet and novelist. He received the Nobel Prize in Literature in 1962. He was the author of works including Siddhartha, Steppenwolf, and Demian.

Hermann Hesse (1877-1962) was born in Germany and later became a citizen of Switzerland. As a Western man profoundly affected by the mysticism of Eastern thought, he wrote many novels, stories, and essays that bear a vital spiritual force that has captured the imagination and loyalty of many generations of readers. In 1946, he won the Nobel Prize for Literature for The Glass Bead Game.

4.6 out of 5 stars
4.6 out of 5
54 global ratings
How are ratings calculated?
To calculate the overall star rating and percentage breakdown by star, we don’t use a simple average. Instead, our system considers things like how recent a review is and if the reviewer bought the item on Amazon. It also analyzes reviews to verify trustworthiness.
Top reviews

Luke
4.0 out of 5 stars Foreshadowing
Reviewed in the United States on June 11, 2021
Verified Purchase
Peter Camenzind is not among Hesse's best work, but it's a worthwhile read for those that love Hesse and want to read all or most of his work. The story details the coming of age of Peter Camenzind, from his small village consisting mostly of his family, and onto his task of breaking free from the small confines, venturing out into the world to meet scientists, artists and others like himself. The novel is a good starting point of Hesse's own journey through life, from traditional paths to adventurous, spiritual ones. It marks the beginning of the adventure which would lead to great books like Narcissus and Goldmund and Siddhartha.
Read more
One person found this helpful
Helpful
Report abuse

Mr. Bojo Risin'
3.0 out of 5 stars Hesse's First Novel
Reviewed in the United States on May 27, 2014
Verified Purchase
Like many of Hesse’s novels, “Peter Camenzind” is a Bildungsroman, literally a “novel of education” wherein we witness the coming-of-age of the eponymous protagonist. As seems to be the case with Hesse, the protagonist develops while other characters tend not to; rather, they serve the purpose of driving the maturation of Peter Camenzind, particularly his friendship with Boppi. Hesse spares details when they do not contribute directly to this growth; the most fleshed-out portions deal with the thoughts and emotions of Peter Camenzind himself as he goes from the rural mountain village to one city after another before realizing the village is where he truly belongs.

Overall, “Peter Camenzind”” is a good but not great Hesse novel. A lot of the themes expressed here are developed more thoroughly in later novels. If you are new to Hesse, I recommend reading “Siddhartha” and/or “Narcissus and Goldmund” first. If you are already a Hesse fan, by all means read this book.
Read more
5 people found this helpful
Helpful
Report abuse

Thomas J. McFadden
4.0 out of 5 stars Prompt and in great condition.
Reviewed in the United States on October 6, 2019
Verified Purchase
I am most happy with my order. Having read Hesse's major novels I was delighted to find some more of his work to enjoy.
Read more
Helpful
Report abuse

T. Huff
5.0 out of 5 stars Five Stars
Reviewed in the United States on January 6, 2018
Verified Purchase
not to be missed for Hesse-Enthusiasts!
Read more
Helpful
Report abuse

Alpine Plume
5.0 out of 5 stars Once Again Brilliant !
Reviewed in the United States on November 2, 2013
Verified Purchase
What can you say: Always fantastic from the true Master !
A truly moving and touching story of one soul's journey through life.
Read more
One person found this helpful
Helpful
Report abuse

Patrick Welage
5.0 out of 5 stars Five Stars
Reviewed in the United States on July 10, 2016
Verified Purchase
Hermann Hesse is a brilliant writer. The book is beautifully written !
Read more
One person found this helpful
Helpful
Report abuse
See all reviews

Prof. A.
5.0 out of 5 stars Really enjoyed this
Reviewed in the United Kingdom on October 15, 2020
Verified Purchase
Fully recommend
Read more
Report abuse

peter john nolan
5.0 out of 5 stars a good read
Reviewed in the United Kingdom on August 24, 2017
Verified Purchase
The theme of the book is that longing for human company,searching for love and that great journey home. Typical Hesse but under developed. In todays world where isolation is avoided the book is a start to explore human nature.
Read more
Report abuse

Gratuz
3.0 out of 5 stars Pleasant Novel
Reviewed in Canada on March 2, 2019
Verified Purchase
Peter Camenzind was Hesse's first major book and should be read with that in mind. If you want to get to know the author's growth trajectory and how his thinking changed over the years this is a good read. If you want a novel written with bend towards romanticism, which still offers some deep and challenging questions of ourselves, then well worth the time.
Read more
Report abuse
See all reviews
Back to top
Get to Know Us
Make Money with Us
Amazon Payment Products
Let Us Help You
EnglishChoose a language for shopping. United StatesChoose a country/region for shopping.
© 1996-2021, Amazon.com, Inc. or its affiliates