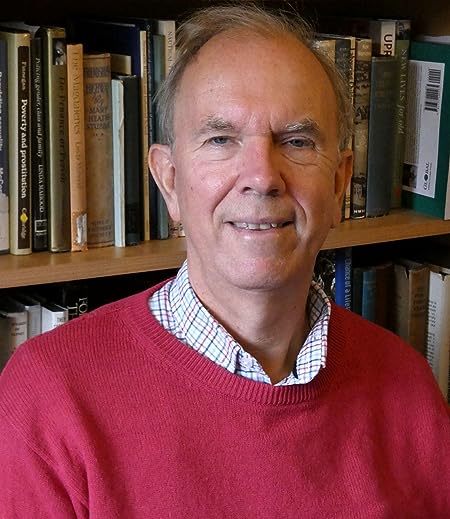 Peter Higginbotham became fascinated by the workhouse when, tracing his family history, he discovered that one of his forebears had died in such an institution. His extensive researches resulted in a number of books including the much-praised 'Workhouse Encyclopedia', 'Voices from the Workhouse', and 'A Grim Almanac of the Workhouse'.

His latest book, 'Workhouses of London and the South-East', is a richly illustrated survey of over than 600 establishments in London and the historical counties of Berkshire, Kent, Middlesex, Surrey and Sussex.

One of his favourite previous works, 'The Workhouse Cookbook', is actually more of a history of the workhouse rather a recipe book but clearly confused bookshops who mostly filed it under "cookery" rather than "history"! It was followed by his entertaining history of the English prison system, 'The Prison Cookbook'.

Peter, who lives in West Yorkshire, has frequently contributed to magazines, radio and TV programmes such as "Who Do You Think You Are?" and "Heir Hunters". 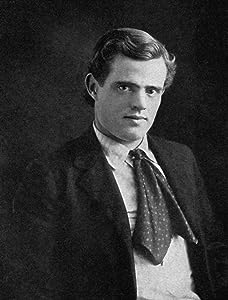 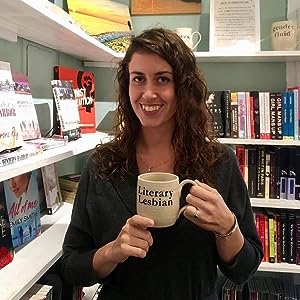 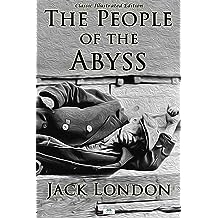 The People of the Abyss - Classic Illustrated Edition Jul 26, 2014
by Jack London, S. Harris
( 157 )
$0.99
* Beautifully illustrated with atmospheric images, The People of the Abyss is Jack London's fascinating account of life in the East End of London in 1902. He wrote this first-hand account by living in the East End for several months, sometimes staying in workhouses or sleeping on the streets. The conditions he experienced and wrote about were the same as those endured by an estimated 500,000 of the contemporary London poor.

* This meticulous digital edition from Heritage Illustrated Publishing is a faithful reproduction of the original text and is enhanced with images carefully selected by our team of professional editors.
Read more
Other Formats: Hardcover , Paperback 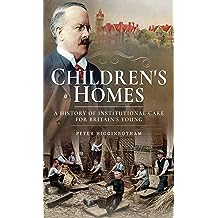 Children's Homes: A History of Institutional Care for Britain's Young Jul 30, 2017
by Peter Higginbotham
( 40 )
$11.99
What image does the word orphanage conjure up in your mind? A sunny scene of carefree children at play in the grounds of a large ivy-clad house? Or a forbidding grey edifice whose cowering inmates were ruled over with a rod of iron by a stern, starched matron? In Children's Homes, Peter Higginbotham explores the history of the institutions in Britain that were used as a substitute for childrens natural homes. From the Tudor times to the present day, this fascinating book answers questions such as: Who founded and ran all these institutions? Who paid for them? Where have they all gone? And what was life like for their inmates? Illustrated throughout, Children's Homes provides an essential, previously overlooked, account of the history of these British institutions.
Read more
Other Formats: Paperback 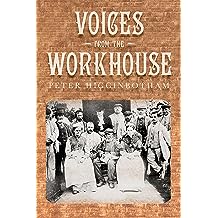 Voices from the Workhouse Dec 1, 2012
by Peter Higginbotham
( 74 )
$2.99
Voices from the Workhouse tells the real inside story of the workhouse in the words of those who experienced the institution at first hand, either as inmates or through some other connection with the institution. Using a wide variety of sources including letters, poems, graffiti, autobiography, official reports, testimony at official inquiries, and oral history, Peter Higginbotham creates a vivid portrait of what really went on behind the doors of the workhouse—all the sights, sounds, and smells of the place, and the effect it had on those whose lives it touched. Was the workhouse the cruel and inhospitable place as which it’s often presented, or was there more to it than that? This book lets those who knew the place provide the answer.
Read more
Other Formats: Paperback 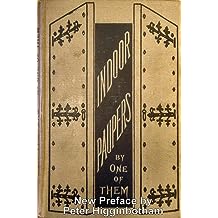 Indoor Paupers: Life Inside a London Workhouse (Illustrated) Jan 21, 2013
by Anonymous 'One of Them', Peter Higginbotham
( 36 )
$6.59
Now available for the first time in more than a century, this unique book provides an insider's view of life inside a London workhouse in the 1880s. Originally published anonymously, a new preface by Peter Higginbotham, uncovers the identity of the author and that of the workhouse he describes. The book, the only full-length account of workhouse life through an inmate's eyes, includes fascinating details of the characters who inhabited the institution and the sometimes nefarious practices engaged in by its staff.
Read more
Other Formats: Paperback 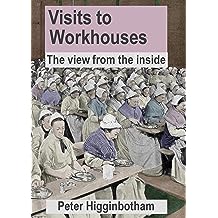 Visits to Workhouses: The view from the inside Nov 24, 2019
by Peter Higginbotham
( 4 )
$7.99
This volume includes over fifty first-hand descriptions of visits to workhouses and their associated accommodation for the sick, the elderly, children, and vagrants. Some previously anonymous locations have now been identified for the first time. Published between 1834 and 1931, these accounts were written by a wide variety of individuals including administrators, journalists, inspectors, campaigners, ‘social explorers’, vacationers, and the merely curious. As well as the facts and figures recorded by inspectors, other visitors, such as Charles Dickens, present us with vivid pictures of the inmates, their stories, and even how spoke. The 'social explorers' who disguised themselves as tramps to pay undercover visits to the workhouse casual ward graphically record the discomforts of the experience, such as 'mutton broth' baths in which they were expected to take a dip. The accounts given by more incidental visitors may throw up small but interesting details, such as how the inmates’ potatoes were prepared and served at the North Dublin workhouse, or that as early as 1890 the Chorlton union workhouse at Withington had a telephone connection to central Manchester, or that on the white pottery used in the St Marylebone workhouse infirmary, that for the patients had a blue badge while that for the nurses had a red one. Although the workhouse is often portrayed as an unremittingly grim institution, it was not without its lighter moments, such as when the inmates of the Haslingden workhouse were introduced to the phonograph. Even out and out comedy occasionally makes an appearance, as when the man recording the details of entrants to the Romford casual ward was presented with the name ‘Llanfairfeckan’ — resorting instead to entering it as ‘Barking’. Whatever their reason for putting pen to paper, those who visited workhouses and recorded their impressions have left us with a valuable and often unexpectedly revealing source of information that has greatly enriched our knowledge of the institution. The book also includes a short history of the workhouse system.
Read more
Other Formats: Paperback 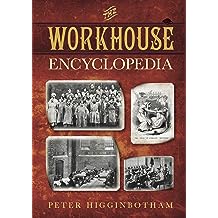 The Workhouse Encyclopedia Mar 1, 2012
by Peter Higginbotham
( 103 )
$19.49
This fascinating, fully illustrated volume is the definitive guide to every aspect of workhouse life. Compiled by Peter Higginbotham, one of Britain's foremost experts on the subject, it covers everything from the 1725 publication An Account of Several Workhouses to the South African Zulu admitted to Fulham Road Workhouse in 1880. With hundreds of fascinating anecdotes, plus priceless information for researchers including workhouse addresses, useful websites and archive repository details, maps, plans, original workhouse publications and an extensive bibliography, it will delight family historians and general readers alike.
Read more
Other Formats: Hardcover , Paperback 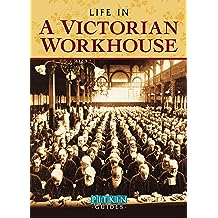 The word 'workhouse' has a grim resonance even today, conjuring up a vision of the darker side of Victorian Britain. Almost every town had at least one workhouse, and most people dreaded ending up there.

Here we examine how workhouses came into being, what life was like for men, women and children on the wrong side of the poverty line, and how social attitudes evolved through the momentous events of Victorian Britain into the 20th century. Illustrated from contemporary and modern sources, this fact-filled guide presents an intriguing picture of a world of steam engines, self-help, service and salvation - where workhouse life, and workhouse reform, influenced attitudes and services we now take for granted. 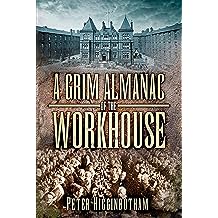 Grim Almanac of the Workhouse (Grim Almanacs) Apr 1, 2013
by Peter Higginbotham
( 47 )
$11.99
For two centuries, the shadow of the workhouse hung over Britain. The recourse of only the most desperate, dark, and terrible tales of malnutrition, misery, mistreatment, and murder ran like wildfire through the poorer classes, who lived in terror of being forced inside the institution’s towering walls—and, as this collection proves, all of them were true! This book contains 365 incredible tales of fires, drownings, explosions, and disasters, infamous scandals such as the Andover affair—where inmates were forced to eat the bones they were supposed to be crushing to ward off starvation—and sickening tales of abuse, assault, bodysnatching, poisonings, post mortems, and murder. Accompanied by 70 rare and wonderful illustrations, this book will thrill, fascinate, sadden, and unnerve in equal measure.
Read more
Other Formats: Paperback 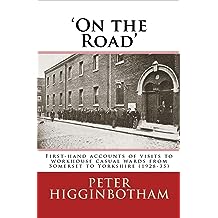 'On the Road': First-hand accounts of visits to workhouse casual wards from Somerset to Yorkshire (1928-35) Sep 21, 2017
by Peter Higginbotham
( 5 )
$5.99
- First ever re-publication of these unique diaries
- Includes a specially written illustrated history of the casual ward
'On the Road' makes available in a single volume three major first-hand accounts of visits to the casual wards (overnight accommodation for tramps, vagrants and other wayfarers) at dozens of English workhouses between 1928 and 1935. Its shocking revelations about the treatment of the inmates of these institutions led to material improvements in conditions. The book includes an illustrated introduction to the casual ward by Peter Higginbotham, a well-known author and researcher on the the workhouse system.
Read more
Other Formats: Paperback 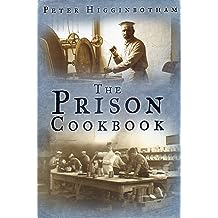 Prison Cookbook
by Peter Higginbotham
( 6 )
$10.99
This copiously illustrated book takes the lid off the real story of prison food.Including the full text of an original prison cookery manual compiled at Parkhurst Prison in 1902, it examines the history of prison catering from the Middle Ages (when prisoners were expected to pay for their own board and lodging whilst inside) through the nefarious prisons of the Victorian age and on to the present day
Read more
Other Formats: Paperback 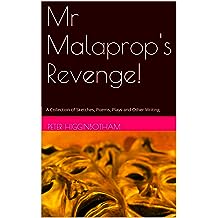 Mr Malaprop's Revenge! Aug 30, 2013
by Peter Higginbotham
$4.99
Mr Malaprop's Revenge! is a wide-ranging collection of comic and other writings which reveal another side to Peter Higginbotham, best known for his work as a social historian. This selection – which ranges from one-liners to one-act plays – includes homages to such diverse names as Noel Coward and Stanley Holloway. The title piece records the astringent memoirs of the husband of Sheridan's Mrs Malaprop. In the one-act comedy 'Steam Radio', an ill-assorted cast of actors mounts a disastrous radio adaptation of 'Shortish Encounter' while 'Albert at the Seaside' relocates the classic tale of young Albert Ramsbottom from the lion's den at at Blackpool Zoo to the Sellafield nuclear reprocessing plant. In between, enjoy the delights of Oxford in autumn, a revelation of what names such as 'SKODA' actually stand for (Some Kind Of Disaster Area), a peep behind the doors of the world's worst dating agency, a foreigners' guide to the words of the Yorkshire anthem 'Ilkley Moor Baht 'at', and much more.
(Note - contents previously published under title 'Melon Cauliflowers'.)
Read more
Other Formats: Paperback