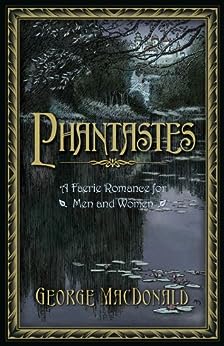 Phantastes: A Faerie Romance for Men and Women Kindle Edition

'A devotional book for non-religious people.' Review on Amazon --This text refers to an alternate kindle_edition edition.

George MacDonald --This text refers to an alternate kindle_edition edition.

4.4 out of 5 stars
4.4 out of 5
92 global ratings
How are ratings calculated?
To calculate the overall star rating and percentage breakdown by star, we don’t use a simple average. Instead, our system considers things like how recent a review is and if the reviewer bought the item on Amazon. It also analyzes reviews to verify trustworthiness.
Top reviews

tanya kilabuk
1.0 out of 5 stars Great Book but Terrible Edition
Reviewed in the United States on July 20, 2019
Verified Purchase
I love this book so much and ordered it to own my own hardcover copy. I was severely disappointed with the quality of this edition. The pages are glossy, relatively thin and very cheap feeling. The binding is ok but with respect to the pages, it's almost like holding a magazine. There is a very distracting violet border in the margins of every page. The whole effect greatly distracts from the reading experience, in my view.
Read more
14 people found this helpful
Helpful
Report abuse

Denise D. Toth
5.0 out of 5 stars Where it ALL Started....
Reviewed in the United States on August 18, 2019
Verified Purchase
I'm a complete bookworm, I love the written word and any and all chances I have, I always take it. One of my absolute favorite Authors is C.S. Lewis, I can't even begin to tell you how may times I have read all of the books in The Chronicles of Narnia. I also love reading J. R. R. Tolkien and he and C.S. Lewis were great friends. What I found out, quite accidentally, is that George MacDonald inspired both and I can 100% understand why. As a matter of fact, C.S. Lewis quite often quotes MacDonald and I hadn't realized just how much until I re-read his works. I guess you can say, if it weren't for George MacDonald, who knows if we'd have the literary works we have to treasure. George MacDonald wrote a beloved story with this and when I read it and re-read it, I understand and appreciate what I'm reading all the more, not only for it's contained beauty, but for having a very real respect and admiration of just how much influence he still has!
Read more
10 people found this helpful
Helpful
Report abuse

Oothcalogan
3.0 out of 5 stars Fairly good book, deluxe but poor edition
Reviewed in the United States on November 1, 2019
Verified Purchase
George MacDonald was a good novelist if the reader is comfortable with the idiom of his era, but this recent Hendrickson deluxe edition is not a good one--publishers have pretty much lost the gift of good book design. The paper is thin, the book is badly shaped, fancy and gussied-up doodads are on every page but there is no margin to speak of. I wish I had found an earlier edition at an affordable price.
Read more
4 people found this helpful
Helpful
Report abuse

Captainhmk
5.0 out of 5 stars Wonderful book!
Reviewed in the United States on January 26, 2021
Verified Purchase
Anyone who loves fantasy tales will really enjoy this book. The language is simply beautiful and is an example of the type of prose that we don’t see being written in today’s literature. The story exhibits an illustration of innocence and love. Truly an enjoyable book .
Read more
One person found this helpful
Helpful
Report abuse

Traci E.
5.0 out of 5 stars Beautiful!
Reviewed in the United States on July 18, 2018
Verified Purchase
This is an absolutely beautiful copy of this book! Love it!
Read more
3 people found this helpful
Helpful
Report abuse

Karolyne Dos Santos
5.0 out of 5 stars Great book, good PDF print
Reviewed in the United States on March 22, 2021
Verified Purchase
I got the PDF version for free online, and this is a print out of that version. Good, clean, and small font.
The story itself is amazing, a great winding road of a trip.
Read more
Helpful
Report abuse

Cindy M.
4.0 out of 5 stars Interesting for one of first fantasy type writing but
Reviewed in the United States on January 6, 2020
Verified Purchase
I was looking forward to the pictures I was told about but this particular printed version doesn't have pictures. Guess thats why it was so cheap
Read more
Helpful
Report abuse

S. Lancaster
5.0 out of 5 stars A classic for a reason
Reviewed in the United States on December 28, 2019
Verified Purchase
This beautiful and mysterious story doesn’t offer up all it’s gems easily. It’s a book that you wind up pondering for a good, long time.
Read more
Helpful
Report abuse
See all reviews

Amazon Customer
1.0 out of 5 stars DO NOT BUY THIS VERSION. NON-SENSICAL AND BEARS SERIOUS DEVIATION FROM ORGINAL ENGLISH TEXT
Reviewed in the United Kingdom on February 17, 2020
Verified Purchase
The text is probably an automatic translation of a foreign text, and makes no sense in english. The text deviates considerably from the original english composition. DO NOT BUY THIS VERSION. Not worth any stars
Read more
One person found this helpful
Report abuse

Richard Abbott
5.0 out of 5 stars A book at the heart of the modern fantasy tradition
Reviewed in the United Kingdom on January 5, 2014
Verified Purchase
I was reminded of George MacDonald's writing by a friend on Google+, and he has been a great find. I already knew that CS Lewis acknowledged him as a major inspiration, but had not expected to find out just how large an influence he has been on modern fantasy as an entire genre.

I devoured two of his works in rapid succession - Phantastes and Lilith - and found them to have substantial differences as well as similarities. In both cases, MacDonald felt the need to devise a means for his protagonist to make the transition from the world we live in, into the particular fantasy world of the title in question. This is definitely a feature of the era, also seen in some equally inventive traveller's tales stories of the 19th century which never aspire to magic or the land of Faerie. Many modern authors would probably begin his or her story directly in the other realm, but Lewis used various devices such as the well-known Wardrobe, or the `Wood between the Worlds' to this end. For MacDonald and his contemporaries, the transition, and the relationship between the worlds, was an important ingredient.

Some of MacDonald's ideas have become so commonplace that some readers may think there is little originality in the books. Tolkien's ents are here, along with Lewis's courtly culture and virtues, and just about everyone's goblins and elves. In common with a great many other writers, the societies are basically medieval in outlook. People ride horses, fight with bladed weapons, and communicate face to face. Limited magical abilities are present, but not as learned talents for just anyone - they are an innate faculty of some beings and inaccessible to others.

Of the two books, Lilith is much more overtly concerned with Christian themes, building on the tradition that the woman of that name was Adam's first wife. Some familiarity with Christian elaboration of this idea helps, but is not essential, since the tradition MacDonald is using comes from outside the written text of the Bible. His profound commitment to principles of eternal hope and redemption drives the conflicts and resolutions of the book's characters. Themes of life and death fill the book, together with the Christian duty to lay aside the everyday life in order to put on a new kind of life. It is a duty which comes no more easily to the book's main character than to any of the rest of us.

Phantastes, subtitled `A Faerie Romance for Men and Women`, is, perhaps, a more conventional fantasy tale. It describes a quest and trial of passage in which the central character has to identify and master his shadow side - just as Ged has to in Ursula LeGuin's EarthSea books. There are mysterious beings, often women, locked inside wood or stone and waiting to be released by the right individual. There are warnings about particular actions or pathways, most of which are ignored by the protagonist who has a rather exaggerated sense not only of his own safety, but also the ability of the wider world to survive his rash deeds unscathed. The theme reaches back to Greek mythology (if not earlier), and forward to our own ecological travails. And finally there is the necessary noble deed which cannot be accomplished except through the gates of death.

The books, especially Phantastes, will not just appeal to fantasy fans, but are also of interest to students of psychology. Some passages anticipate the later formal development of psychotherapeutic understanding. Students of the life and work of, say, Freud and Jung will already know just how much of their thinking rested on earlier foundations laid by artists, philosophers, and authors. Here in 1858 we already have MacDonald writing about the "forgotten life, which lies behind the consciousness", and the mutual dependence of external objects with the "hidden things of a man's soul".

Having said all that, some people will, no doubt, be impatient with these works. For me they were definitely both five star books, not least because many of my favourite authors have so obviously been influenced by them. They have survived over 150 years of literary development remarkably well, but inevitably use some constructions and habits of thought which will seem dated to the modern reader. If you are keen on exploring one of the foundational authors of modern fantasy, and willing to work with the conventions of the 19th century, these books are for you.
Read more
One person found this helpful
Report abuse

Amazon Customer
1.0 out of 5 stars Terrible edition
Reviewed in Germany on July 7, 2017
Verified Purchase
It is a terrible edition of a great book. Don't buy it, if you want to read this more than once : the font is very small, and the overall look of the text hints at being written in a .doc file. Terrible edition printed in a very leisurely manner.
Read more
Report abuse
See all reviews
Back to top
Get to Know Us
Make Money with Us
Amazon Payment Products
Let Us Help You
EnglishChoose a language for shopping. United StatesChoose a country/region for shopping.
© 1996-2021, Amazon.com, Inc. or its affiliates