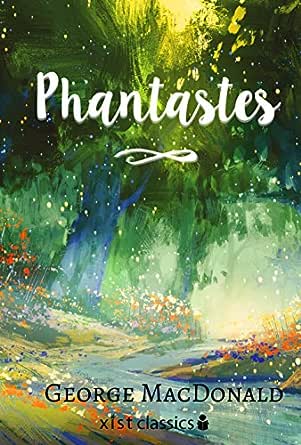 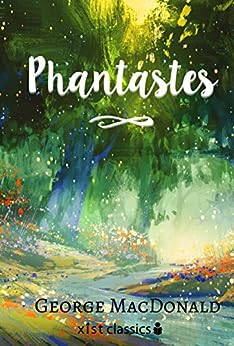 (1824-1905) The great nineteenth-century innovator ofmodern fantasy, whose works influenced C. S. Lewis, J. R.R. Tolkien, and Charles Williams. "I do not write forchildren," MacDonald once said, "but for the childlike,whether of five, or fifty, or seventy-five."
--This text refers to the paperback edition.

"I was dead, and right content," the narrator says in the penultimate chapter of Phantastes. C.S. Lewis said that upon reading this astonishing 19th-century fairy tale he "had crossed a great frontier," and numerous others both before and since have felt similarly. In MacDonald's fairy tales, both those for children and (like this one) those for adults, the "fairy land" clearly represents the spiritual world, or our own world revealed in all of its depth and meaning. At times almost forthrightly allegorical, at other times richly dreamlike (and indeed having a close connection to the symbolic world of dreams), this story of a young man who finds himself on a long journey through a land of fantasy is more truly the story of the spiritual quest that is at the core of his life's work, a quest that must end with the ultimate surrender of the self. The glory of MacDonald's work is that this surrender is both hard won (or lost!) and yet rippling with joy when at last experienced. As the narrator says of a heavenly woman in this tale, "She knew something too good to be told." One senses the same of the author himself. --Doug Thorpe --This text refers to the paperback edition.

4.6 out of 5 stars
4.6 out of 5
141 global ratings
How are ratings calculated?
To calculate the overall star rating and percentage breakdown by star, we don’t use a simple average. Instead, our system considers things like how recent a review is and if the reviewer bought the item on Amazon. It also analyzes reviews to verify trustworthiness.
Top reviews

Patricia D
5.0 out of 5 stars No wonder CS Lewis admired this man!!
Reviewed in the United States on June 7, 2017
Verified Purchase
A fantasy that CS Lewis included in his top favourite fiction. Evidently it had quite an effect on CS Lewis, whose imagination allowed him to create the Narnia Chronicles and his science fiction Space Trilogy. I can see why CS Lewis liked the book. Although it's a fantasy, the characters are developed in such a way as to make it feel like non-fiction. George MacDonald was one of CS Lewis's favourite writers, and this book encouraged CS Lewis to explore the depths of his own imagination. The war between good and evil is ever evident. Beyond clever... beyond me how both George MacDonald and CS Lewis can find so much extraordinary detail in their settings and plots... such amazing philosophical minds!!
Read more
12 people found this helpful
Helpful
Comment Report abuse

lynn
5.0 out of 5 stars Make of it "what you can"
Reviewed in the United States on July 19, 2017
Verified Purchase
The five stars might be misleading...I love this book, but that doesn't automatically mean you will. The main character (if you can even call him that, you don't learn his name until a few chapters in) is dreaming...at least, he journeys to Faerieland, which is essentially the same thing for MacDonald. But again—don't be misled! Dreaming for MacDonald doesn't mean you're not awake. But you, the reader, might either feel like this story is as confusing and meandering as a dream, or maybe even a nightmare.

The first time I read it, I nearly stopped halfway because I was so lost. And yet I couldn't give up, either. I think it's because I dimly realized and connected the confusion at the beginning of the story to Anodos--a dreamer and idealist who cannot realize or bring about any of his beloved dreams and ideals. I wanted to know what would happen to this poor, pathetic dreamer, able to free an enchanted maiden with a song, but unable to free himself.

MacDonald's writing might seem at times to have no point at all, like a trip on LSD, as a reviewer mentioned above, but don't be deceived. MacDonald knew what he wrote, and believed that everything he meant could mean even more than he intended. (Check out his essay "The Fantastic Imagination" if you want more of his thoughts on what fantasy can do.)

There is indeed a moral of the story, if you're enough of a "true man or woman" (in MacDonald's words) to listen, and of you have the courage to see it. He would encourage you to make, "not what you please" of this story, but rather "what you can."

John P. Lalka
5.0 out of 5 stars Fantasy Roots, great insights.
Reviewed in the United States on August 25, 2017
Verified Purchase
Incredible writing, simple and groundbreaking fantasy. I see where Carroll, Tolkein, Lewis got inspiration. There are numerous similarities in context and message. Now reading the Princess books by MacDonald. Phantastes is a more convoluted and puzzling structure than the Princesses books.
Read more
3 people found this helpful
Helpful
Comment Report abuse

pickypicker
4.0 out of 5 stars The man who humbled C.S. Lewis
Reviewed in the United States on June 26, 2016
Verified Purchase
'Phantastes' cannot be described by the convenient check boxes. Characters are one-dimensional, for instance, because each character is symbolic of some quality. Only the hero is multi-dimensional, being in a way an amalgam of all the rest. The book is Victorian, romantic, and religious in the sense of having been written by a very religious man whose life path is spiritual.
Sometimes the language and images are gorgeous, sometimes not. We certainly see the cauldron out of which came 'The Princess and the Goblin' and MacDonald's other more familiar works--the beautiful woman of incredible old age, the healing bath, the fire that does not burn........'Open the eyes of your heart,' he is always urging, 'and see the miracles hidden everywhere.'
Read more
7 people found this helpful
Helpful
Comment Report abuse

Charles Watson Sr.
5.0 out of 5 stars Exquisite Fantasy
Reviewed in the United States on June 21, 2014
Verified Purchase
I could have chosen no better book of this genre to be my first read of its kind. I can understand how C. S. Lewis felt inspired after reading George MacDonald's "Phantastes" among many other great works. I am not going to attempt to break down this book in a vain effort write a worthy review of such a magnificent book... at least not after the first read. I probably won't be able to read it a second time any time soon due to what is currently on my shelf/agenda. Once I read it again, I will dissect the book and write the review it is due. The next book on my list is his "Lilith". MacDonald has gifted me with a longing desire to read many other books of this genre due to his profound demonstration of what can be created in the realm of fantasy literature.
Read more
6 people found this helpful
Helpful
Comment Report abuse

JVR
4.0 out of 5 stars too big
Reviewed in the United States on December 13, 2019
Verified Purchase
I bought this for a friend because I've owned the same edition for many years and like it. The problem: the book I own was pocket-sized. This one is very large (both the book and print)—like a "large print" edition for elderly people. That's okay, the contents are the same, but it's less convenient. I wish they still had the pocket-size available.
Read more
Helpful
Comment Report abuse

Susan G.
4.0 out of 5 stars Reading Phantastes in the dark.
Reviewed in the United States on August 2, 2014
Verified Purchase
For me, and I'm a reader, this was a difficult read for this reason: I had a hard time figuring out how it all fit together. The imaginative creative and literary skill of the writer is off the charts great, but how does it all make sense? My confusion over not understanding how the parts morphed into a whole delayed my ability to relax and enjoy some amazing portions of descriptive and poignant literary skill. I'm almost finished with the book and look forward to re-reading it at some future having arrived at some understanding of what it is about by searching for the meaning of Phantastes on Google and finding a 7-part YouTube briefing that was so helpful. Now I can finish it with some sense of the bigger story.
Read more
3 people found this helpful
Helpful
Comment Report abuse

Matthew
5.0 out of 5 stars A justifiable title
Reviewed in the United States on July 20, 2019
Verified Purchase
Absolutely fantastic. This book offers a sensory experience that does not fail at any point to explore the world of Fairy Land at the most full and satisfying depth. I imagine some might find the book a little wordy, but one must be aware of classics in that sense, they are timeless because unlike readers and writers today, they take their time. Glad to know What C. S. Lewis meant nowabout George Macdonald. Truly a seminal figure in the study of fantasy.
Read more
Helpful
Comment Report abuse
See all reviews

Caitlin
2.0 out of 5 stars Gummed up pages
Reviewed in Canada on September 2, 2020
Verified Purchase
I was so excited to receive this book as a gift for my husband. It is his all time favourite story and his original copy is worn to pieces. Our oldest son has taken an interest in the book so I thought a new copy for them to read together was in order!
When I received the package, which arrived quickly (thank you!), I was pretty disappointed to see this tar-like substance on the sides and top of the pages. It doesn't come off. I'm not sure what it even is!
Read more